OPEN LETTER TO THE FRINGE 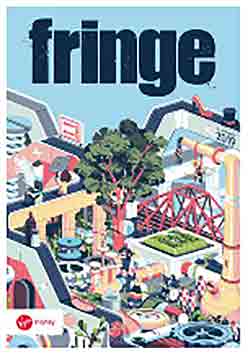 The 72nd Edinburgh Festival Fringe is over for another year. I love the Festival, yet, as a veteran visitor and participant, my passion turns to despair as I witness the event become more and more under the influence of capitalist profiteers. The Fringe Society pride themselves on their Open-Access policy, but I fear Open-Access to artists has become Open-Access to Venue Managers who vet and exploit unsuspecting artists at an increasing rate, whilst providing platforms for established headliners and filling their in and outdoor spaces with as many profit-making sideshows as possible.

The ever-expanding commercial venues are governing and directing the course and future of the annual event. These companies have grown bigger than the Fringe Society itself. I visited the hard-working Fringe Press Office (which does its best to help all artists), and also visited the Press Office of one of the leading venue operators. Guess what? The latter is a machine far bigger than the former. One which even seems to operate its own Press and Fringe policies.

The rules for these companies are not quite the same as those for all. Assembly venues, before their shows begin, announce: ‘Welcome to the Assembly Festival’ and, to be honest, that’s what the Fringe now feels like: Assembly, Pleasance, Gilded Balloon, Underbelly (The Big4), with others like The Space and C Venues bringing up the rear, have created a festival of their own within the festival.

These companies also move the hub of the Festival. Wherever they set up shop, with their countless bars (selling two-pint drinks in one huge glass, for God’s sake), food stalls, and all else, wherever they go, the fringe sheep follow. They commandeer public squares, buildings, thoroughfares, and their Las Vegas-style domination is far from the zeitgeist of the Fringe beginnings. I am full of admiration for what these company directors achieved in their early days, but their motivation now seems to be the antithesis of what I suspect it was then. If these giants were to hold a mirror up to their younger selves, perhaps, they would see this too. The time must come for change.

How do young entrepreneurial producers compete? How do they outplay the Grand Masters? They can’t and shouldn’t try. It would only lead to much more of the same. The Fringe Society itself has to lead the way to change. Keeping Open-Access to artists, of course, but limiting the venues any one company can operate, thereby opening the Festival up to aspiring venue operators who may bring back the genuine spirit and ethos of the Fringe. The Festival does not need new venues, but new people to run them, and there’s plenty of talent ready to jump at the chance. This should also apply to the Free Fringe Operators; they too are monopolizing venue spaces at an increasing rate.

In short, limit the amount of venues any individual or company can license or operate, give Open-Access to a new breed of producers who in turn will bring a new breed of artists, giving the biggest arts festival in the world an exciting new life for generations to come. Viva Edinburgh Festival Fringe!

Tweet
Tweet
This entry was posted on 7 September, 2019 in homepage and tagged kevin short, OPEN LETTER TO THE FRINGE. Bookmark the permalink.

3 Responses to OPEN LETTER TO THE FRINGE