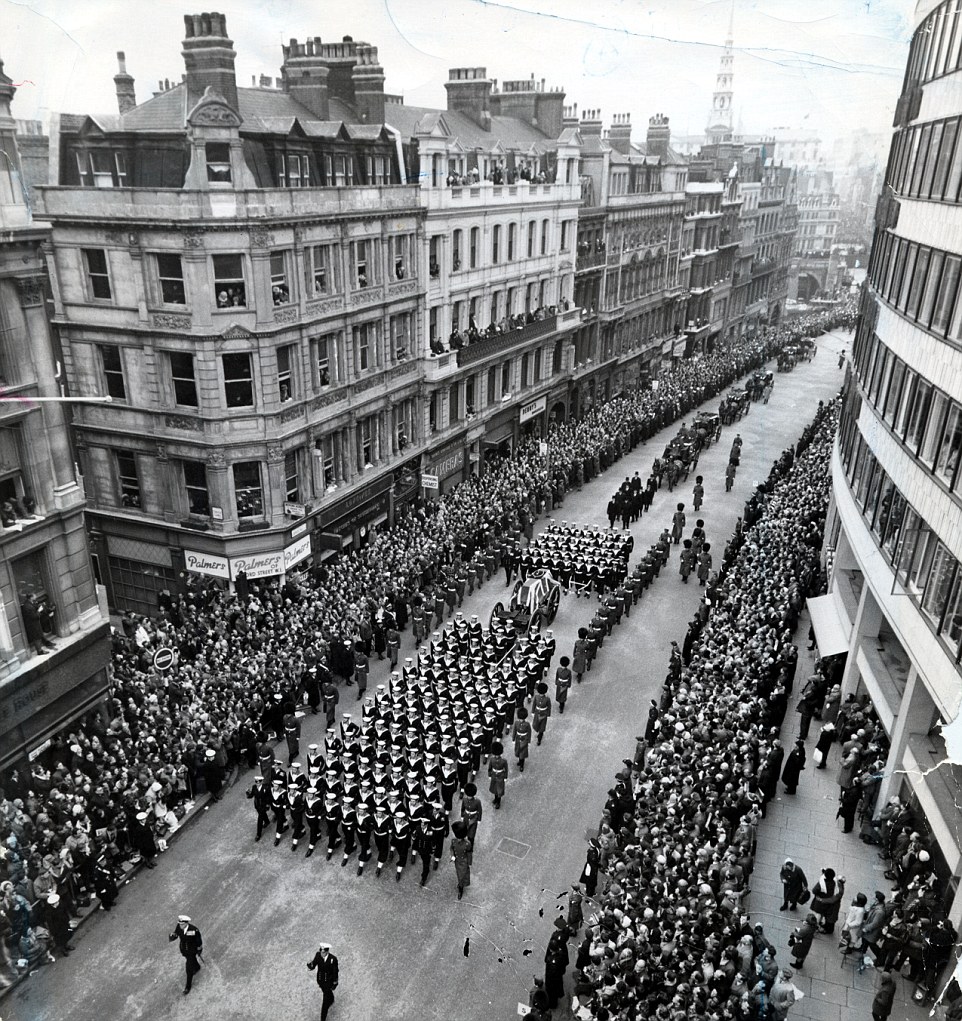 Winston Churchill died on the twenty-fourth of January 1965. He was ninety-years-old.

Two days before the funeral, which was planned for the thirtieth, my husband, Hugh, came home with a bottle of champagne and exciting news.

“I booked us a first floor room in a hotel on the Strand. We’ll be able to watch the funeral in style.”

“They still had available rooms? I can’t believe it!”

“I got the last one,” he proudly said and pointing the champagne bottle towards me added.

“And we’ll drink this while we watch it.”

“You are brilliant. What a coup!”

On the day, we rushed under a grey sky through the freezing London streets packed with solemn crowds, who had been there since dawn, if not all night, and got to the hotel by eight-thirty.

“What a great big window!” I exclaimed looking out onto the street.

Sipping our flutes, bubbling to the brim, we heard the chimes of Big Ben as the casket left Westminster Cathedral at nine-forty-five. Then the first-minute gun boomed from the Royal Horse Artillery.

Before we could see the approaching funeral cortège we heard the music played by the Band of the Irish Guards.

“What’s that they’re playing?” I asked.

Below, cordoned off by policemen, their heads bowed over their automatic rifles in ceremonial grief, hundreds of still mourners shivered.

The mile-long procession moved slowly, steadily at an inexorable pace, to the beat of the   muffled drums. Trumpets sounded in the air. The rhythm of hundreds of marching feet reverberated on the asphalt.

Leaning as far out of the window as we could: we saw the white hats of the phalanx of young men – the Royal Navy Gun Crew – who drew the oak coffin, draped in the Union Jack, borne on a massive gun-carriage with huge wheels. They were flanked by straight-backed officers with rifles.

On a black pillow, the Insignia of the Garter rested in the centre of the casket.

Behind, sombre in his top hat, walked his son, Randolph, with whom I’d ridden in a taxi not so long ago. His grandsons, nephews and several other men followed.

Four men, bearing his honours and decorations moved in rhythm.

Lady Churchill followed in a Royal carriage lent by the Queen. Several other carriages drawn by bay horses followed behind her.

The wheels of the carriages whirled rhythmically.

The Royal Household Cavalry, with red coats and shiny silver helmets with long plumes of horse hair hanging from the top, rode on black steeds. They too were in pace with the marchers.

Mesmerized by the spectacle we sipped champagne, our hearts thumping to the beat.

Then it was over, out of our vision, out of our hearing. The guns, rifles, sabres and swords; the forces of land, sea and air, the powerful and mighty, and the rest of the bellicose machine moved on.  The troops, the gun crews, the red caps and grey coats. The proud flags and heraldic banners that swayed in the cold wind. The State Trumpeters in their cloths of red and gold, the drums draped in black. The pole bearers, the veiled staffs of the drum majors, the Cavalry men, Beethoven’s funeral march, the guards in their bearskin hats, the Royal Marines, the police officers trooping. The old warrior’s lifeless body on its way to St. Paul’s Cathedral was now archived in our memory files.

“My God, that was the most amazing theatre of war,” I said, closing the window to prevent the chill from coming in.

Extract from I Was There by Hanja Kochansky

Tweet
This entry was posted on 26 January, 2018 in homepage and tagged Hanja Kochansky. Bookmark the permalink.