Posted on 9 May, 2020 by Lawrence Freiesleben 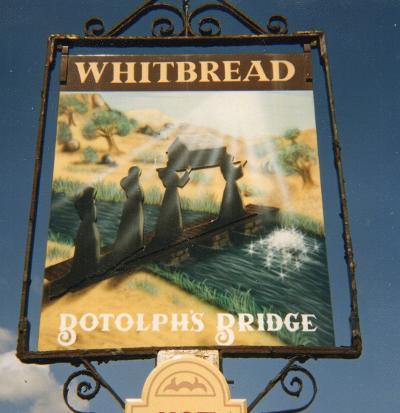 Encountered on Romney Marsh on a return cycle from Spain in 1986[i], the Botolph’s Bridge (above), near West Hythe, Kent, still exists – and judging by pictures even retains the same sign. As with all the surviving pubs I’ve looked up, so the predictable legend runs at present: TEMPORARILY CLOSED

To purists of the ‘pub crawl’, I’m not sure if anything I’ve ever partaken in, truly qualifies. Three or four pubs over a whole day would have been my limit. At 14 or 15 we didn’t have the money to be reduced to crawling. Dedicated friends of mine might have drunk more in the evenings, but the best occasions (to me) were about the talking – and whatever the talkers think, too much drink reduces its quality. Even on our richest occasions (one friend once found a ten-pound note at a time when ABC[ii] was 28p a pint) 4 or 5 pints would have been unusual. In fact, with all the walking or cycling inbetween, it would rarely have been more than merry: a trip on the famous road [iii]. 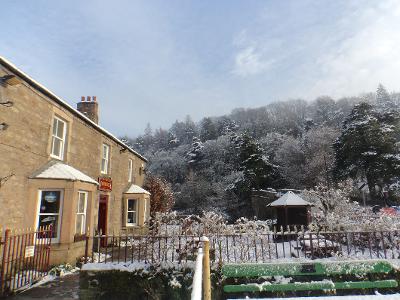 Before I become too intoxicated on distant memories of the mid to late 70s, this sharp winter view of The Elks Head, at Whitfield, Northumberland, 38 years later, in December 2015, will clear the head. Yet with the sun warming the mellow stone behind our backs, it was warm enough (in coats and hats) to sit outside . . . at least for half an hour. 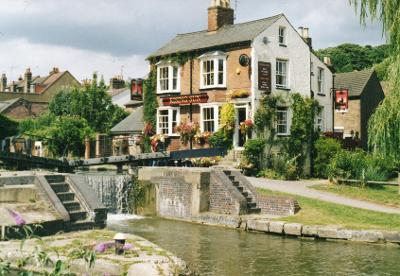 The great thing about the virtual pub crawl is its lack of cost. Probably the most expensive talking drinking walk, was when a good friend and I decided to take a roundabout village route, over the fields and along the lanes, from my house in Aylesbury, to his in Princes Risborough. It must’ve been 1978 and the distance 10 or 12 miles. The Rising Sun (above) in Berkhamsted, visited in July 2003, was not on our route, and it’s pretty much impossible now, to confirm what definitely was. When I was given a camera the following year, I could only afford a 12-exposure film every two or three months. In contrast to the price of beer, photography nowadays (digital, at least) costs virtually nothing. Anyone can take a view of anything, without worrying. Then, you had to agonize, and frames were easily fogged. Virtually no photographic record exists from all those years – which perhaps allows memory freer rein? I wish I could check with my friend, but devastatingly to all who knew him, he was hit by a car and killed less than four years later whilst hitch-hiking.

I know our plan was to have a pint in every pub on the route excepting Aylesbury (once reputed to have over a hundred) and Risborough. I know that we took in the Harrow in Bishopstone with its rustic garden and lost atmosphere[iv], and next The Dinton Hermit[v]. After that came a long, dry spell to the Swan at Little Kimble. The Three Crowns at Askett and The Red Lion at Whiteleaf followed at comfortable intervals. Amazingly, perhaps because they are in a kind of outer commuter-land, all these pubs survive today – though I can’t say in what form. Being a less serious drinker than Matt was, I often had only a half. We finished at the Bird in Hand, next door to his mum and dad’s house and probably met his dad there, for the loyal man took that long exercise every evening. 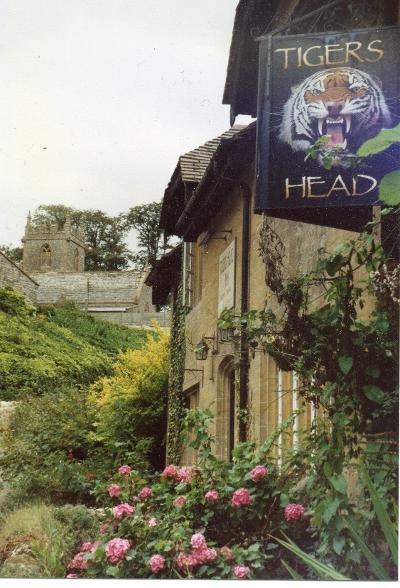 By contrast to pubs in wealthier areas, The Tiger’s Head at Rampisham in Dorset, has been a private house now for over 25 years. This photo was taken in September 1990 – another of those strange occasions where passing through on a journey, we photographed a place that we subsequently chanced to live very close to. In this case, 3 years later, the Tiger’s Head was on the verge of closure. The pub can briefly be glimpsed[vi] in the excellent BBC film adaptation of Geoffrey Household’s Rogue Male of 1976, starring Peter O’Toole. Rampisham post office is also shown in that film from both outside and inside[vii]. When we moved to the straggling village, it hadn’t changed at all in the seventeen years since and we soon became good friends with the Postmistress and her taciturn, wood-chopping husband.

Even the pegboard still remained inside. Whatever happened to pegboard? I haven’t seen it for sale since the 1970s. 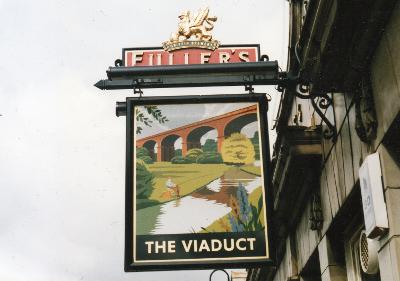 Caught in a traffic jam en-route to a gallery in Wandsworth to deliver paintings, I had plenty of time to alight from the van to take the photograph above. Dating back to the 1730s, the pub originally went by the title of the Coach and Horses. A hundred years later, in understandable homage to Wharncliffe Viaduct[viii] – erected not far away behind it and depicted on the sign extant in 2007[ix] – the pub was renamed. Isambard Kingdom Brunel’s first major structural design certainly must have seemed an epic structure in the 1830s – and in widened form, still carries the four tracks of the mainline from Paddington to Wales and the Westcountry over the valley of the river Brent. When we used to visit my Nan and Grandad in the late 60s and 70s, I always looked forward to glimpsing the majestic brick structure we habitually referred to as Hanwell viaduct, striding over its surprising enclave of rural scenery. I was born only a few miles off, initially growing up under the less impressive road-world’s equivalent of Chiswick flyover[x] whose concrete piers are rumoured to entomb victims of the Krays!

As for the pub, updating itself with a new glazed façade of architectural terra-cotta in the early 20th Century, The Viaduct, remains one of the most distinctive buildings on the Uxbridge road[xi].

The only occasion on which I exceeded my modest drinking limit was in Winslow sometime in 1979. I’d left home by then and was living at the rural community of Redfield[xii]. Matt hitched over to stay for a few days. He’d won some money on a horse and we toured all the pubs in the nearby town one lunchtime, having a pint of stout in each as well as a bar of fruit and nut – a combination I liked back in the days of yesteryore . . .  Unfortunately, at closing time (they still had it in those days) we were not satisfied and preceded to an off-licence. Later, back at home in our high room up in the trees, everything began to rise, fall and spin like we’d got caught in a stormy whirlpool at sea, and then I was ill for the rest of the day. On reflection this was probably a lucky experience to have at 17, as it’s kept me from drinking too much ever since, saving a lot of money and time . . . 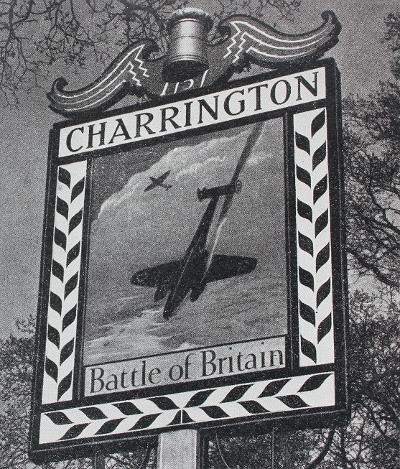 Travelling back to Kent, here are two fascinating images taken from English Inns Illustrated, (Odhams Press Ltd, 1951) of a pub at Northfleet, as it was in the late 40s.

On a tour around Kent in 2004, we diverted from the original A2 to try and seek out this fascinating looking shed, moved in 1948 from a wartime site – an observer’s post perhaps – at the mouth of the Thames. Not that we really expected it would still exist. 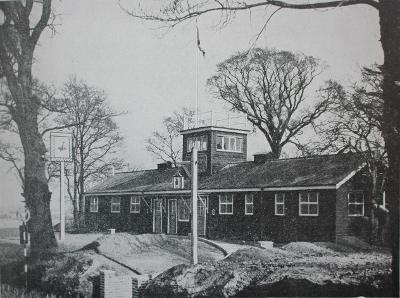 Perhaps we were hoping for a time-loophole, with beer at 1948 prices enlivened by stories of long-forgotten aerial missions? Had we had easier access to records at that time, we would have discovered that it was demolished in 1962[xiii] 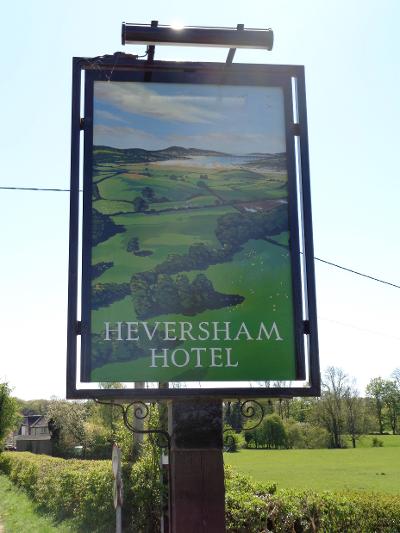 A swooping aerial view over quite a different estuary graces this beautiful if conventional sign – the first view from Now rather than Then . . . and therefore the hotel is naturally closed: a place not to rest. The majority of my route from home to an almost empty Arnside and back is idealized on this sign. Though, in reality, Arnside is only a mile away across the estuary, it’s a 26 mile round cycle by lane, bridle path, and bumpy sea embankment – which would be fine, except I got a puncture a third of the way back, then my pump broke, so I had to ride the last 8 miles on a flat tyre. Although thick-wheeled bikes will tolerate this, it’s like cycling uphill the whole way and the noise is awful. But I least I could get back before dark. In fact, it only added about twenty minutes. The inner tube however, next day, was deeply unhappy. Tested in a bowl of water, it was reminiscent of one of those films about submarines in distress. A passing naval inspector might’ve suspected it had been run through a sewing machine. 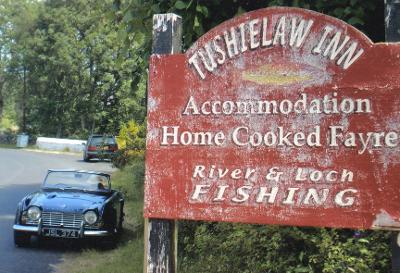 Great name, great location on Ettrick Water – a tributary of the Tweed – amongst the beautiful landscapes of Selkirkshire in the Scottish borders . . .  Unfortunately, the Tushielaw Inn, when we paused in hope during the summer of 2013, was closed. It was closed when we passed in winter also. 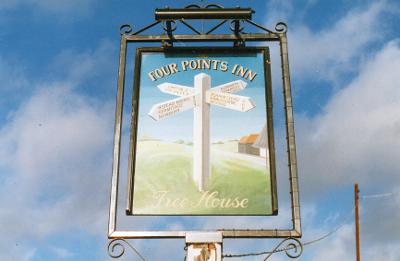 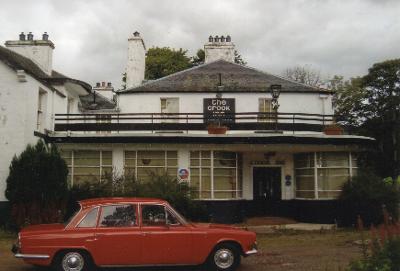 Twenty-five twisting miles west of the Tushielaw, The Crook Inn at Tweedsmuir, shown in this dismally overcast image from August 2010, went one better than closed. Abandoned a few years before this photo was taken, it remains abandoned still. Despite the Art Deco frontage of 1936 shown above, it is one of “many claimants to be the oldest Inn in Scotland”[xiv]. Licensed in 1604, apparently, Rabbie Burns wrote Willie Wastle’s Wife[xv] within its walls. From this, especially after a few drinks, it would be easy to sideslip via William McGonagall[xvi] to Ewan McTeagle, Monty Python’s Scots Poet.[xvii] 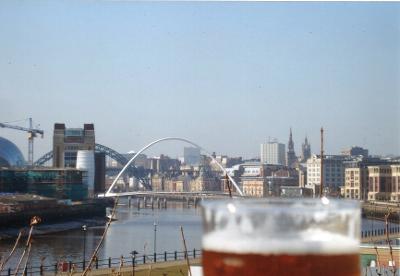 A toast to the Tyne from the ever-friendly, Free Trade Inn, Newcastle, February 2011. Just don’t get me started on the contents of the Baltic Centre for Contemporary Gimmicks! Although I have seen a few good things there – and a free ride in the glass lift is always worth it, even to a claustrophobic. 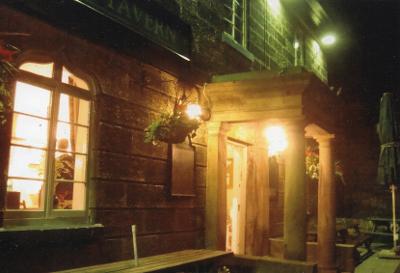 Autumn 2011. Night outside the Station Tavern, Grosmont, North Yorkshire – a favourite haunt of drivers and firemen on the North York Moors Railway. If we weren’t rostered for footplate duty the following day but were only polishing and lighting up the locomotive fires, I remember this as a nice mothy place to sit, whether it was warm or not. 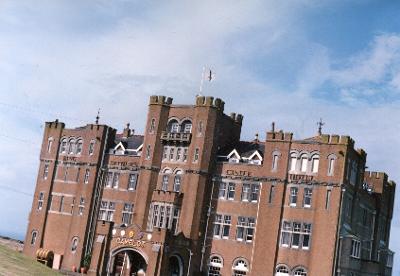 At the end of this pub crawl, barely able to stand straight, I came upon King Arthur’s Castle Hotel at Tintagel, Cornwall, and staggered inside to sup a Camelot cappuccino[xviii]. Would this restore the straightness of my carriage? What would Arthur and Merlin have to say about such blasphemies? Or would the scent of such a beverage wake and enliven them in their cave, now that they are so needed to defeat all our enemies and false prophets?

[iv] Ruined (to our minds) in the 80s when it became a “gastro pub”. The garden was poshed-up, the trees possessed by a Tannoy system.

[v]  Which as far as I can judge from information, has gone a similar route to The Harrow.

[xi]  To quote https://en.wikipedia.org/wiki/Hanwell#Short_history_of_the_inns_and_public_houses Nikolaus Pevsner described is as “a jolly tiled Edwardian pub”. Unfortunately, “the profusion of street furniture detracts from the original impact these rich mid-browns and mid-cream glazed tiles gave the building.”

[xviii] As was truly advertised in the summer of 2006.

View all posts by →
This entry was posted on 9 May, 2020 in homepage and tagged Lawrence Freiesleben. Bookmark the permalink.