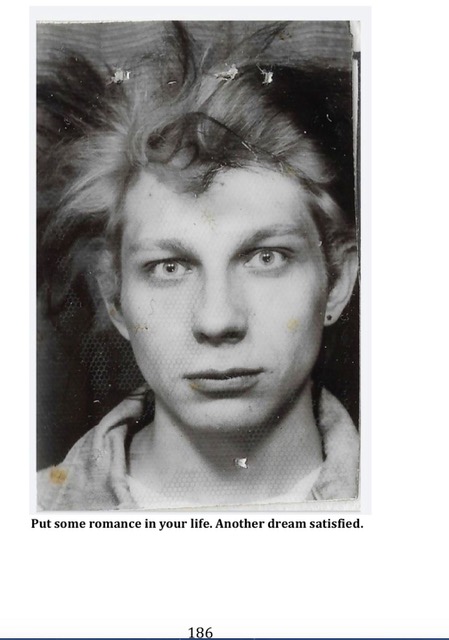 Part story, part self, Richard Cabut punks his way back
Into purpose. In his new book, its the young writer Robert
Who colours the sounds these words spill, from an acid trip’s
Take on words to becoming his own Sid n’Nancy,
With the disenchanted Marlene, who promptly further dirties
Her Dietrich by both deriding her fuckpal, whilst decrying
His striving and rendering every sneer and sperm’s overkill.

In no other book could you find Adam Ant and Chris Marker;
As Robert and Marlene tramp through Camden ‘In summer darkness,
the light was reminiscent of dusky scenes in some of Peter Greenaway films,’
So they drown, while breasting their way on parched earth, ripped up
By Punk, ripe for plucking, so much so that their mind and arse fucking
Comes to represent the torn town. For this is an inbetween times
Memoir tale, covering Cabut’s single, by which I mean the song

Of all writers who rend their vibrant way down the path
To either the Sodom of success, or the ‘Sod ‘em!’ of failure;
Richard/Robert’s lanced love of language is pen as penis,
And caterwaul, roar and laugh at the strange turns of fate
And the strained twists of the present, and while his journey
Is tasteful and as tacky as imagination is gargled, so runs
The spirited kisses and the ‘disgrace to the human race’

He admits. For postscript diary entries detail further context
For these stories, as this former NME writer finds his own foes,
Fans and features inevitably sweat drenched, striking shit.
From the Seventies drag, and on and into the Eighties;
Iconic times where the icons didn’t shine quite half as much
As they stank of Eau de Cologne, or pose, preen and anger,
The search for what’s real is the perfume, invested as memories

Accrue interest in Richard C’s memoir bank. Sex is writing to him.
And writing sex. He shapes bodies. Throughout this book, human
Functions river and rise through dream ink. To which Cabut gives
Chase, as this ‘Portrait of the Piss Artist as a young man’ joists
And Joyces, and the Journalist and music writer transcribes
The starting sounds that inspire and which will push him
Further on through the pink.  Cabut is of the city and more,

He strives to write through it. His lines are as urban as the  Soho
Cafes he prowls. In the shadow of Jarman, Westwood
And the forever fried Bacon, seeking sensation and the kiss
Of the cool and the cowed.  Marlene is ‘energy on toast,’
And Robert craves extra slices, and yet feeling alone
When he’s with her, the indulgent days stoke alarm,
Not just in the street, but in the souls Cabut describes,

Traps and captures; as Marlene cheats on Robert,
Down on all fours, hope is harmed. This damage, this pain
Primes the punk’s progress. His pilgrimage and word pogrom,
Riot and rout each creamed page, for this book is full fat
On lean times and a true chunk of change for your pocket,
It flickers like film through its sprockets, giving the street
Fiction’s finger from another  defiant day stoked by rage. 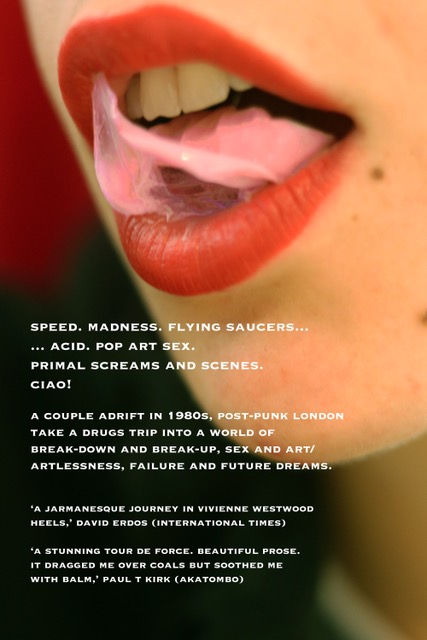 Here then is sin’s Sid with another nefarious Nancy.
A Bonnie and Clyde without Pistols, or rather just after
Punk’s own; and a Sonny and Cher come to that
Of the triple X generation, with the same pretence
And slick glamour that Benjamin Braddock and Elaine
Robinson had once thrown. A bruised and broken romance,
A peach pulped,  a punk punctured. What grows defunct
Is the purpose to ruin the world and not prize
What this story does for stung times as Cabut carves fruit
And futures to taste the kiss that corrupts us when temptation’s
Tease tongues each bind.  That serpent’s kiss tars us all
And we suck it down with each story.  Looking for a kiss
Sheds skin sagely and then it wears it again:

A PUNK’S LIFE AS FICTION

View all posts by David →
This entry was posted on 28 November, 2020 in homepage. Bookmark the permalink.