Another piece from my memoir, I WAS THERE, about my escape, during WW2, from Yugoslavia to Italy in 1943, when I was six-and-a-half-years-old. A refugee now, it is the beginning of a new chapter in my wayfaring life. 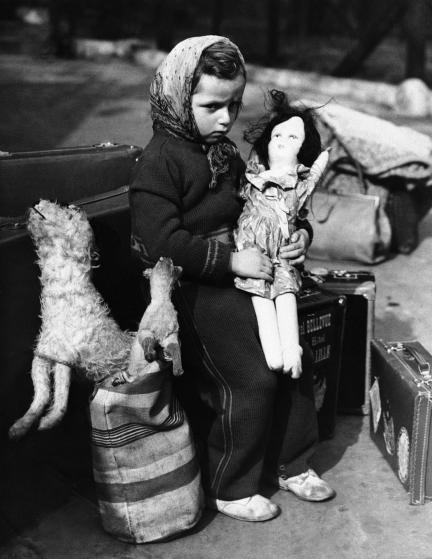 ‘Damned – but God only knows why.’

‘I can choose either to be a victim of the world

or an adventurer in search of treasure.

It’s all a question of how I view my life.’

The ferry from Vis to Bari was dangerously overcrowded.

As we took off, a north wind raged over the waves. I was violently seasick, and to make this even more agonizing, halfway through the journey our ferry’s Morse code lights failed. Mistakenly believing us to be the dreaded enemy, the frightened partisans on the adjacent shore opened what is known as ‘friendly fire’ on us.

Puking bitter bile I was almost blown over the railings. My stepmother, Kukiza, hanging on to me with all the strength her slender arms could muster, dragged me down to the jam-packed hold. There, forcing her way, she found a narrow space under a table for us. The cabin reeked of petrol, vomit and the acrid odour of fear. Choking, we came back up for air and the bullets that came from the shore. Making me lie down on the wood deck, she lay over me to shield me with her body.

As though in a dream, I seemed to leave my body, and observed the scene from a distance. I saw an ancient woman hovering above a petrified, bilious child – a child mortified because in the past she had been so icy to this woman who now risked her life to protect her.

Shame almost overshadowed my fear, but the old woman told me not to feel bad because I was only a child who hadn’t known better.

I learnt an important lesson that night. I learnt that even in hell one could find love.

It was late evening, chilly and foggy when we finally docked in Bari. A soft rain was falling. Red and green traffic lights reflected in the wet macadam of the mucky streets around the port. I had never seen traffic lights and was totally fascinated by the oily splashes of colour that lapped the grey pavements. Kukiza clutched my hand as we were drawn into the swarming crowd: into a tide of gaping-mouthed humanity who seemed as lost as we were. What to do? Now we’d arrived we had nowhere to go.  Although I was afraid, at the same time I was excited.

In the confusion of hundreds of displaced civilians and a throng of soldiers and social workers trying to keep order in the unbridled mass, a Yugoslav comrade (a drugariça), in a uniform (like the one my daddy had worn that time my mother had taken me to the Zagreb train station to welcome him back from wherever he had been), found us. She took us to a brightly lit packed hall, where we were served cups of sweet hot chocolate and delicious crusty white bread which tasted like cake to me. After this banquet, the comrade shepherded us to her house where we slept in a large bed with three other women.  The flat was raucous, overcrowded with partisans and refugees. But the pasta boiling in the messy kitchen bubbled, the tomato sauce was sweet and aromatic, like the one my dad cooked. And there was enough for all.

Tweet
This entry was posted on 20 December, 2017 in homepage and tagged Hanja Kochansky. Bookmark the permalink.