This short novel immerses readers in a cartoon version of the world of crop circles and alternative lifestyles at the end of the 1980s. Set in deepest Wiltshire it finds ex-soldier Calvert, damaged physically and mentally from fighting in the Falklands and elsewhere, teaming up for a third summer season with van-dweller and serial womaniser Redbone to design, plan and make crop circles in a series of night-time raids. These are planned out in detail by Calvert, who spends his time undertaking reconnaissance missions in order to find suitable fields for Redbone’s visionary fractal drawings. They meet in the village pub, destroy all written evidence and have established their own code of conduct which they adhere to.

Or try to. Redbone is prone to moments of hippy illumination, staring into space and chaotic thinking, and several of the pair’s adventures (each crop circle is a chapter of the book) result in unwanted encounters with other nocturnal visitors: fly-tippers, drunk landed gentry, poachers, a crazy old lady, and fleeing animals all disrupt their plans, although only one circle has to be abandoned before completion.

Gradually their anonymous work becomes the subject of newspaper reports, and attracts UFO conspiracists, historians, eco-freaks, opportunists, pagans and mystics. This is all told through occasional asides from Calvert (who videos TV reports about their creations) and Redbone, but mostly via (fictional) articles, headlines and opinion pieces from a number of local, national and international sources. Myers has clearly enjoyed pastiching and exaggerating the different tones and editorial stances of these sources, from concerned local news sheets to a hysterical Sun rant (with lots of CAPITALS! and exclamation marks!) via the more down-to-earth Guardian, not to mention a brilliant poem*, ‘Song for the Circle’, supposedly written by the poet laureate of the time, where Gaia is ‘suckling on her golden aureole’ and ‘the silent hill watches over. / Haemorrhaging history.’ Of course it does. 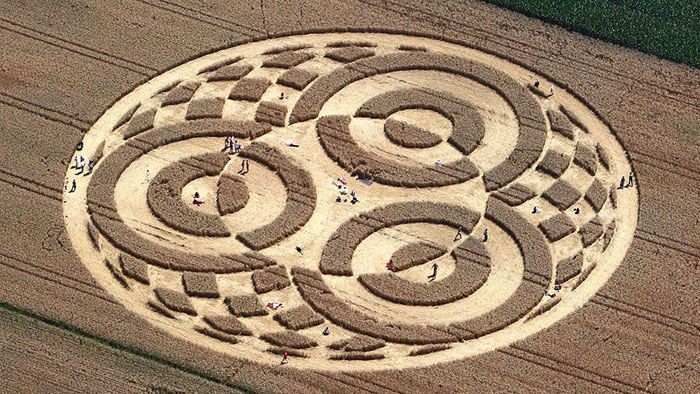 The fact that this book is so enjoyable makes me forgive the obviousness of much of the plot and certainly the characterisation. The drunken Earl they meet (who thinks that Redbone is his gamekeeper) out promenading his mistress Tiggy, is straight out of The Fast Show or The Beano, the confused lady looking for her lost dog was a Monty Python regular, and look at this ridiculous extended list of visitors to one of the crop circles:

By midday on Sunday, Cuckoo Spittle Meadows is busy with photographers, journalists, agency stringers, a ‘cerealogist’ advocating several conflicting paranormal explanations for the crop circle’s existence, excited UFOlogists, the local MP, a Catholic priest there in his ‘official capacity’ as ‘demonic exorcist’, a man waggling primitive dowsing rods, a disgraced psychic, two Romany gypsy women selling blessed corn dollies, a helicopter pilot eating a packed lunch, an MI5 representative, a class of student meteorologists from Exeter, a retired physics explaining to anyone passing that the pattern was created by an ‘electro-magnetic-hydrodynamic plasma vortex’, a grand wizard who has arrived from Cornwall, a New Age a cappella vocal group improvising a work that will later feature on their album Lapsed Eden / Visions of Gaia, several leading Greenpeace activists, a man with a van selling teas, coffees and bacon sandwiches, a very hung-over and confused-looking Earl William Lachlan Alexander Bruce Lascar of Winchem, four police officers, half-a-dozen dogs, and Brian Eno.

It’s laugh-out-loud stuff, but it also lacks real depth: these are easy targets. Myers tries to counter this with comments about Thatcher, the Tories, and police brutality, along with some info dumps about events such as the Battle of the Beanfield and the Stonehenge Free Festivals, but the general tone is lighthearted and frivolous. Even the two men’s growing friendship and comfortable companionship is constructed from the most obvious pairing of opposites: strong and silent versus noisy and disorganised; ex-military versus peace-loving hippy; self-reliant versus needy; celibate and uncertain versus casual sex.

Calvert eventually reveals his scarred face – normally hidden by sunglasses and a beard – to his friend, and welcomes him in to ‘the second smallest detached property in England’, where he lives. It is a kind of resolution, a kind of healing, one juxtaposed with Redbone’s personal revelation that:

[…] their crop circles are fleeting and superficial, all surface, and quite useless, in a way, but he also knows that they matter because they are beautiful and nothing truly beautiful can be useless.

The crop circles will soon be gone as autumn arrives and the crops are harvested, but what remains will become a ‘new layer of this under-England’. Phrases such as this and the narrator’s ‘a song begun in summer will warm the winter through’ suggest that their crop circles may have a kind of mystical effect or psychogeographical presence, might be or create an accumulation of history and geography focussed in the local. Myers seems to want it both ways, wants to scoff and mock but also make us think about nature, friendship, our place in the world, and – without going down the alien encounter route – what might be bigger than humanity, bigger than expected, where the likes of Calvert, Redbone, indeed all of us, are very small cogs in an eternal machine.

(*brilliant as in how it recreates Ted Hughes’ poetic inclinations toward violent mythmaking, animalistic mysticism and visceral imagery.)

View all posts by Rupert →
This entry was posted on 21 May, 2022 in homepage and tagged Benjamin Myers, Rupert Loydell, The Perfect Golden Circle. Bookmark the permalink.