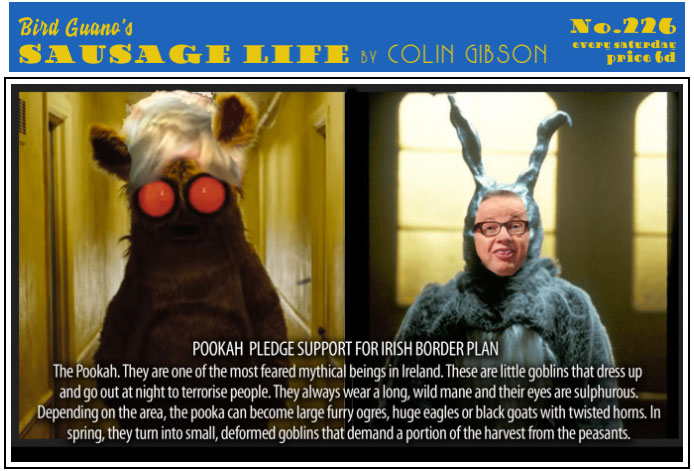 MYSELF: Judging by recent photographs, our Home Secretary is looking a bit worse for wear lately. Do you think the pressure of having a proper job is getting to her?
READER: Poor thing, I sincerely hope not. By the way, whatever happened to that nice signed picture of Priti Patel you used to have?
MYSELF: Oh that. I sold it on Ebay for £30. A fisherman in Cornwall bought it to lure sailors onto the rocks.

FANDOM OF THE OPERA
As an opera buff, I was flattered earlier this month by an invitation to review The Unicorn, Canto Rumoré’s rarely staged one act tragedy. It was performed by the redoubtable Upper Dicker Musical and Operatic Society to a sold-out audience at St Leonard’s beautifully refurbished scout hut & community betting shop. The venue’s low ceiling and small capacity (23), made it a delightfully intimate experience:
The curtain opens to the sound of grief stricken sobbing. Delia is distraught. Her lover, Flaccidius, has heartlessly cast her aside and eloped with Cialis, the French maid, to the far-away village of Lontano where they plan to set up a small dairy business. Delia, beside herself, seeks the help of local crime-boss Nuotare Conpesci and instructs him to arrange the adulteration of Flaccidius’s milk with owl droppings, in the hope of destroying his customer base. Hearing of this, Flaccidius contacts two notorious Sicilian assassins, Piccolo and Grande to arrange Delia’s murder. During their rowdy meeting they drink Grappa and sing the aria Ginocchia Fino Madre Marrone.
The assassins lure the unsuspecting Delia to the forest by promising to get her a secure job in a bank. Soon it dawns on her that the two men are not from a recruiting agency, and falling into a swoon, she abandons herself to her fate. Just then, a shining white unicorn enters (superbly played by Norman Carstairs (back) and Beatrice Rasputin (front), trampling the assassins, and goring them mercilessly with its magic tusk. As they lie bleeding to death, they beg Delia’s forgiveness, singing the plaintive duet siamo solo in esso per i soldi. Delia falls in love with the unicorn, but realises the relationship is doomed, largely because of Italy’s strict inter-species marriage laws. Before the curtain falls, they are joined by the chorus and all sing Cavelli per I corsi.

READER: Hang on! The unicorn? Isn’t that a mythical beast? I’m sure I read that somewhere. I mean…where on earth do these ridiculous operas get their ideas?
MYSELF: Be careful what you read. The Unicorn is no myth. I saw one only yesterday afternoon in the frozen food section in Morrison’s. Although it could have been a Minotaur with a leek strapped to its head.

GIFT WHORES
Always at the avant garde end of the cut-throat world of gifts, prolific inventor Professor Gordon Thinktank has been hard at work in his secret laboratory in Hastings, developing some innovative Christmas gift ideas. His new gluten-free two-piece indoor leisure outfit is perfect for those long winter evenings when you are safely indoors and no-one can see you. Made of a new type of purple acrylic velour which never needs washing and glows in the dark, it is suitable for vegans and rastafarians, containing only 0.003% helium extract and less pork than a traditional £5 note. Dubbed The Twosie, the professor hopes it will be in the shops come the Black Friday before Christmas 2022.

PEDANTIQUE? MOI?
I wrote to the BBC recently, to complain about the shoddy pronunciation employed by the corporation’s presenters. My suggestion that their autocues should be written phonetically, so that proper pronunciation could be accomplished without taxing their tiny little minds too much, prompted this reply from the BBC’s Director-General, Derek Windfarm:
Deer Mr Garno,
fank you for your leter, many poeple have pointed this out. We have tride havin the orto queues written fernectically but the trades onion wooden allow it unless there members recieved remurneration, witch the liesense fee does not incarcerate.
Reguards,
D.Windfarm, BBC (sic)

MORE BANGS FOR YOUR BUCK
That item about professor Thinktank has given me an idea. Seeing as we’re all a bit skint after the Brexit swizz, why not stretch your near-worthless pound a little and beat the rush by making your own crackers this Christmas?
READER: What’s all this Christmas nonsense? April fool’s day was on the first, and we’re in the middle of a mini heatwave.
MYSELF: It’s never too early and we could all do with cheering up.  I’ve already posted my 2022 Christmas cards. What are you doing down here anyway? This is your second uninvited intervention – get back to the top of the page!
READER: I’m staying right here until you tell me how to make the crackers.
MYSELF: Very well. All you need is some sheets of coloured crepe paper, a dozen cardboard tubes like the ones inside toilet rolls, those little metallic strips used for tying the ends of rubbish bags, scissors, glue, and a small quantity of dynamite. Before assembling the crackers, make sure you have a little gift to insert, like a Rolex watch or a diamond brooch, and most importantly, a little piece of paper with a motto, joke or riddle on it. Here is an example to start you off;
Q: What does an octopus have on its underpants?
A: Squidmarks
READER: Squidmarks! Haha! Hahaha! HAHAHAHA!
MYSELF: Steady on, you’ve just had a hernia op.

View all posts by Colin →
This entry was posted on 23 April, 2022 in homepage and tagged Colin Gibson, SAUSAGE 226. Bookmark the permalink.