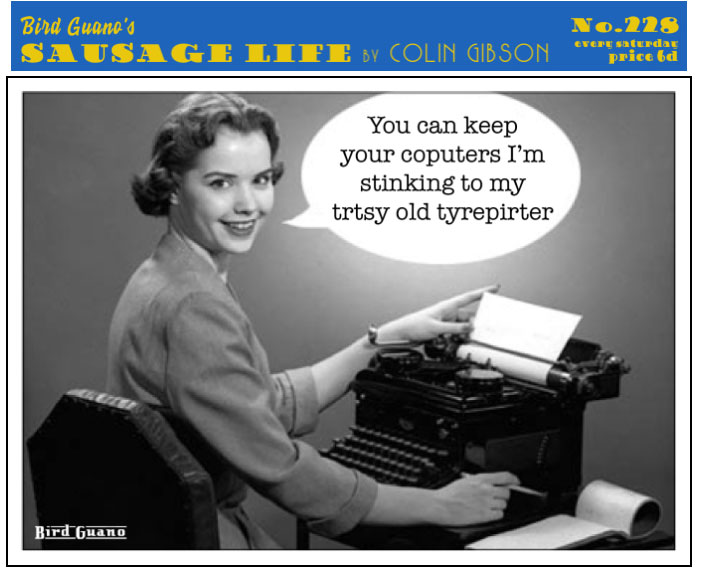 READER: So how did you vote in the council elections?
MYSELF: As always, I voted for Ron Gravy of The British Gravytrain Party.
READER: The BGP? Isn’t that a wasted vote? I mean Ron Gravy? the man’s a laughing stock!
MYSELF: That’s as may be, but remember, a laughing stock is only the prelude to laughing gravy.

SON OF OBITUARY
Harry The Ferret
I first encountered Harry The Ferret ten years ago as he was burgling my mother’s house in Uppere Dicker. Although dressed in a hooped sweater, black Lone Ranger mask, and carrying a bag marked “swag”; he insisted he was from the Sinks & Drains department of Rother District Council, sent to inspect our downpipe. When I pointed out the silver candelabra peeping from his bag, he smiled waspishly and explained that he was “from the old school” and “didn’t hold with torches and the like”. Whilst I was making him a cup of tea, he ran off with a priceless Ming vase and a chiming mantelpiece clock. I shall remember Harry, not for the shards of glass outside the conservatory window, nor his distinctive Doc Marten footprints in the ornamental rosebed, but for the little “present” he would unerringly leave in the middle of the living room carpet.
Farewell Harry, and I only hope that the lock on the Pearly Gates proves as easy to pick as the lock on my Cavalier, which you successfully relieved of it’s stereo system only last August.
HARRY THE FERRET, BURGLAR AKA: Pierre The Greek, Carlos The Mammal, ‘Big’ Arthur Small, ‘Shoes’ Mahoney, Mad Joe Lavattorio (October 1936-May 2022)

WENDY WRITES
Despite Wendy being on holiday (Cleethorpes, since you ask) the usual pot-pourri of postal puerility appears to have piled up on her desk this past week, so I got Wensleydale, my budgerigar, to peck out a couple of letters at random:

Dear Wendy, my husband is terribly grumpy in the morning when he is putting his clothes on. It is driving me frantic, and if I had any wit left, I would be at the end of it.
Yours
Confused, Upper Dicker

Dear Confused,
despite what your friends tell you, cross dressing is far more common than you think, and does not necessarily mean that your husband is a vile humourless slug whose sole purpose in life is to make your existence intolerable. However, a small proportion of husbands, due usually to some early childhood trauma, find the simple act of donning a pair of trousers too much to bear, and lash out accordingly. I would refer you to my pamphlet:-Trousers Without Tears, in particular, the chapter entitled Cheer Up, It’s Only a Shoe.

Dear Wendy
We have examined your column with a very strong magnifying glass, and can find no mention of conjuring tricks, illusions, or anything relating to the art of legerdemain. Why? Is there some shameful incident from your childhood we should know about? Were you sawn in half by a drunken uncle?  Or perhaps persuaded to peer up the sleeve of a lascivious aunt, who then produced out of thin air a suggestively shaped vegetable? Sir, we sympathise, but surely deep psychological scars are no reason to ignore the fascinating world of magic?
Yours mysteriously
Mr Sinistro & Maureen

Dear Mr Sinistro & Maureen,
I would refer you to “Magic, Illusion and Bedwetting” written by Norwegian child psychologist Liv Ljernsennbjorg, a disciple of Jung. In it, she advances the highly plausible theory that the invasion of Poland in 1939, which led to the declaration of World War II, was entirely attributable to Hitler being given a Harry Houdini Junior Magic Kit for his seventh birthday without the instructions. Furthermore, if you don’t stop bugging me, I’ll tell everyone how you do that trick where it looks as though someone is suspended in thin air with a broomstick up their arse.
Vanishingly yours
Wendy

READER:  How do they do that trick anyway?
MYSELF:  Sphincter control, apparently.

I’M GETTING A BOB OR A BILL, OR A NAOMI
Scandinavian psychics Lars Ongar & Rita Brevis will be taking a break from their world tour to appear at Porno Haiku the newly opened spiritualist auditorium in Upper Dicker. Sponsored by Howdy & Doody Creative Accountancy, the popular clairvoyant couple promise to perform all their old favourites: guessing people’s names using only their driving licences, contacting dead relatives via TikTok and consulting the I-Ching whilst blindfolded. Tickets are on sale at all branches of World of Spanners, or (at an exclusive discounted fan club rate), on the Astral Plane.  Support will be by local mystics Mr. Sinistro & Maureen, who as well as doing mashed potato readings and tarot card massage, will be introducing the latest amphibious psychic sensation Eyeball Tooth, The All-Seeing Crocodile.

LETTER FROM AMERIKA
I received this, in the form of 8 tweets, from my old school chum, former president of the USA Donald J Trump (we went to Oxford and Cambridge together).
Hey Bird!
Despite what the fake news mainstream media tells you, I AM STILL THE PRESIDENT. Anyway, Melania loves haddock, whatever that is, and wants me to buy her a fishing fleet. I told her that the little village you live in was famous not only for repelling the Spanish Armada in 1066, but also as the venue for The World Crazy Golf Championship. Once she realised that Scotland, one of my other golf courses, was a mere 400 miles away, she persuaded me to apply for planning permission to turn Hastings into the biggest craziest golf course the world has ever seen and put it in her name. She is one smart lady. Do you still have haddock down there?
#therealdonaldjtrump

View all posts by Colin →
This entry was posted on 14 May, 2022 in homepage and tagged Colin Gibson, SAUSAGE 228. Bookmark the permalink.

One Response to SAUSAGE Life 228