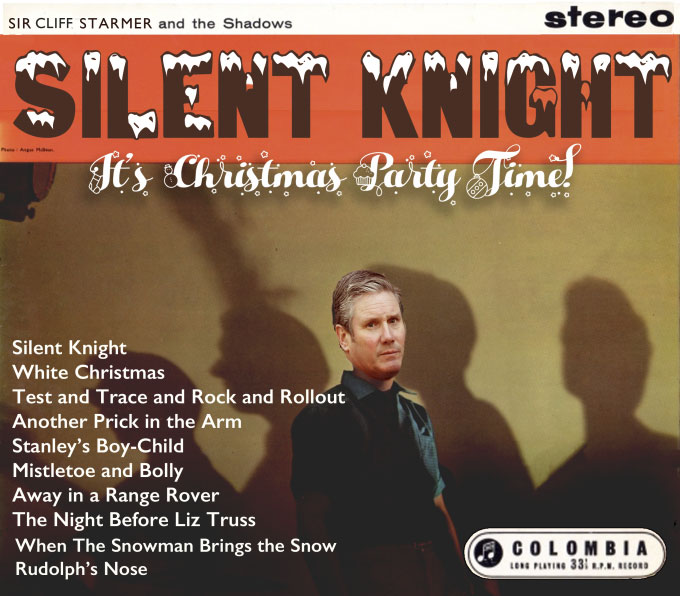 The column which demands a return to uncivilised values

READER: So what are you doing at Christmas?

MYSELF: Christmas? Is it still on?

READER: Of course it is. Plan B Christmas.

MYSELF: What’s that supposed to mean?

READER: It’s simple, pay attention. You shouldn’t show up at work unless there is a Christmas party. You can have this in the office or in a busy pub without a mask, or in a nightclub with a mask, as long as you have your ‘covid passport’. But definitely not on a bus or a train.

MYSELF: I see. That seems quite straightforward. And what sort of party games can we have?

READER: Well, after Secret Santa, you could play Pass the Parcel, which is fun and perfectly safe as long as everyone washes their hands every time they pass the parcel and sings Gloria In Excelsis three times.

MYSELF: Gloria? The whole thing? That’s going to take forever!

MYSELF: How will that work, pandemically speaking?

READER: Everyone will be in separate rooms with an iPad, all connected via zoom.

MYSELF: That’s going to need an awful lot of chairs.

READER: No, each person will bring their own, disinfected chair.

MYSELF: So what’s the point?

READER: The point is to remain standing during the music, and when the music stops, you quickly sit down in the nearest chair.

MYSELF: So who wins?

READER: Everyone. That’s the beauty of it.

Manatee (n) large, herbivorous marine mammal which only comes out in the afternoon

Brexiteer (n) medical condition brought about by clamping both hands on either side of the head and singing “lalala”.

Tripadvisor (n) qualified expert who can explain the correct way to fall over.

The recent shock news that the UK’s longest running radio soap, The Archers, is written by an infinite number of monkeys with an infinite number of typewriters, will come as no surprise to Hastings’ most famous inventor, Professor Gordon Thinktank. For the past three years he has been working with the BBC on a method of replacing the outdated system, which relies on a constant supply of monkey typists.
“My latest experiments make use of a revolutionary algorithm-based system which is able to replicate the farming community of Ambridge with uncanny accuracy,” he told us, “whilst avoiding the irritating bursts of random dialogue which the monkeys often cough up.
Due to the broad range of Simian diversity, the writing team can easily comprise infinite numbers of Baboon, Gorrilla or Orangutang typists who seldom see eye to eye – you can imagine how distracting that might be to the listener. Just take a look at this.”
The professor reached into a filing cabinet and produced a dog-eared script marked The Archers episode 18702: synopsis, “This example was written largely by a group of ill-tempered Macaques from Gibraltar” he revealed as he read it out:
“Peggy Archer and Jennifer Aldridge are fronting a mob-controlled casino in Las Vegas, when who should show up but Eddy and Alf Grundy, who are plotting to murder FBI stool-pigeon Kenton Archer with a sawn-off shotgun and dissolve his body in acid.”
“Do you see what I am getting at?” asked Thinktank, “Once the producer saw this, he would have had the monkeys returned to the writer’s cage until they came up with something more acceptable. Using my patented system, all the Archers characters would be relocated safely in Ambridge and be innocently engaged in normal countryfolk activities, such as sheep castrating, becoming addicted to cocaine or planning this year’s pantomime* in the upstairs function room of The Bull.”
*(Waiting For Godot – the Musical)

YOU ARE IN THE NORTH NOW
Denmark’s The Shed  (“Det Skuret”) is the latest Scandicrime series currently keeping Netflix binge-watchers up all night. In season one which began last week, Falsk Herre (played by Bjørt Urene), a feisty Detective Chief Inspector in the sleepy fish-smelting town of Lukket Mølle, is looking forward to retirement before his dark secret past catches up with him. To his disappointment, during his last few days in the job, he is given responsibility for the investigation into the mysterious and sudden appearance of a log cabin on the jetty of the popular resort’s lakeside health spa. His suspicions are immediately aroused by the fact that the mystery erection lacks windows or doors, and furthermore, the local council has received no planning application for it.
At first, locals believe it to be a magical sauna, left there by pixies, but a thorough forensic investigation fails to support that theory. Soon the local fire brigade becomes involved, and with heavy lifting equipment, they try to force an entry, but the shed proves surprisingly resistant. Hopes are raised, and then dashed, when Falske’s nemesis, flamboyant local fire chief Kristian Guldbil (Lars Laårssensen) makes a dramatic entrance atop his golden fire engine, only to be tragically trampled to death under the hooves of a herd of stampeding elks whilst relieving himself behind some Christmas trees.

THE CARNIVORE IS OVER

An enterprising vegan butcher has opened a pop-up shop in Upper Dicker. Stanislav Waikiki’s Meat is Manslaughter will offer a range of items, including vegan pork chops, vegan sheep’s brains and vegan tripe – all made from goose feathers, soya beans and a rare, marrow-like vegetable cultivated in Wales called Pwelleriac, examples of which are said by some to resemble the face of Ant McPartland. “Everyone’s a vegan now, let’s face it,” Mr Waikiki told us, “but in my opinion it’s just a passing fad, like The Twist, or Brexit. I mean, how long it will last is anybody’s guess but I’ll certainly be keeping my options open. Until this craze has run its course, you can count on me to soya-milk it to the max”.

MYSELF: Really? Since when?

READER: Since I read about it in The Daily Mail.

MYSELF:  Which means it must be true.

READER: Exactly. No more bacon sandwiches or fish and chips for me.

MYSELF:  What about leather shoes?

MYSELF:  Not unless you are Charlie Chaplin in his classic 1925 silent film The Gold Rush, but if you are vegan, you will be required to stop wearing them.

READER:  What? There was no mention of that in The Mail. If you think I’m going to Lidl in my bare feet you’re quite mistaken. I’m calling the whole thing off.

MYSELF: A great loss to the vegan movement, but very wise under the circumstances.

View all posts by Colin →
This entry was posted on 11 December, 2021 in homepage and tagged Colin Gibson, SAUSAGE LIFE 209. Bookmark the permalink.