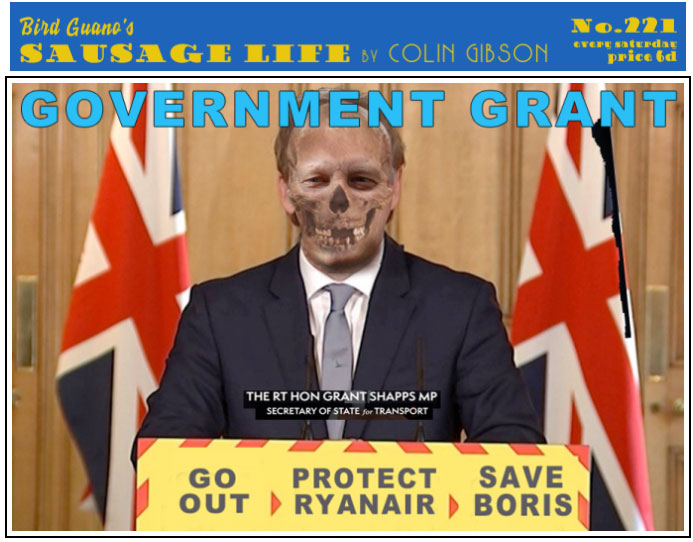 Bird Guano’s
SAUSAGE LIFE
READER: I suppose, like everyone else, you’ve been glued to the new series of Killing Eve. Who did you think was the….
MYSELF: Sorry, can I stop you there?
READER: What? Why?
MYSELF:  Because you, along with everyone else have supposed wrong. I am neither fascinated by the dense moral maze of Killing Eve, nor beguiled by the sexual/political intrigue of Strictly Come Dancing. Furthermore, I have no desire to loiter around “water coolers” in the hope of having “moments” with bores whose lives depend on having vicarious relationships with fictional characters.
READER:  Oooooh!  I’m so sorry Mr. Superior! I’d forgotten you resided on a higher plain than the rest of us.  I mean, pardon me for existing!
MYSELF: I hate to have to remind you, but you actually don’t exist. Just like the cast of Eastenders, Coronation Street and the inhabitants of Love Island, you too are a  fictional character.
READER: Wait a minute! Fiction? Love Island?  Come off it!  Where do you get this stuff?
MYSELF: Let’s just say I know somebody who regularly drinks with someone who’s work colleague is a person known to have connections with certain other persons who must remain anonymous, if you catch my drift.
READER:  I’m gobsmacked. Next thing you’ll be telling me Doctor Who isn’t a real person.
MYSELF:  I would hate to be the one to shatter that illusion.

MUSIC REVIEW: HASTINGS HAYSTACK HOEDOWN
Scrotum & Bagge, 3rd March
Rockabilly enthusiasts packed Hastings’ top venue The Cat’s Pyjama for a rare visit from redneck banjo wizard Earl Scrotum and his longtime sidekick and spoons virtuoso Lester Bagge. Despite being 3 hours late, as their 1962 anthem Pork Barrel Romance blared from the PA  system the redneck legends were eventually wheeled onto the sawdust-strewn stage to thunderous applause, clutching gallon jars of Trailermash their famous home-made liquor brewed from sassafras and roadkill. Sure enough, despite their ages the feuding cousins Lester (79) and Earl (a sprightly 82) soon abandoned any attempt at music, and began pounding each other with their instruments. Lester slipped on some of his own blood which had leaked from an early blow to his head from the business end of Earl’s banjo, but to the audience’s delight, he managed to poke him in the eye with a sharpened dessert spoon on the way down as he lapsed into unconsciousness. The Cat’s Pyjama is closed until further notice.

A Piddinghoe man, who cannot be identified because of his mother’s connection with a religious sect which worships telephone kiosks, has been charged with masterminding a complex pyramid scheme designed to embezzle thousands of pounds from a charity sponsoring a spelling competition for overprivileged children from all over the UK. Harry “Bongo” Tuttenhurst (43), the stilt-walking clown who regularly busks outside Sidcup railway station, claimed in his defence that he was using the money to fund WAKO, an Australian right wing think-tank in Gecko Falls, New South Wales, which promotes the idea that arm wrestling is the true path to spiritual enlightenment.

TEABAG STUCK IN SPOUT
The Upper Dicker Examiner
A minor crisis was averted when villagers rallied round after being alerted to a major blockage in the catering-sized teapot employed by the Upper Dicker Women’s Institute Bowling and Crochet Club during their annual meeting at Lower Dicker Masonic Lodge. “It was lovely seeing everyone pull together,” commented retired fitness coach Wendy Carthorse (93), “it reminded me of the atmosphere during the London Blitz, except without the incendiary bombs”. To everyone’s relief, the guilty teabag was soon fished out and disposed of by the eager volunteers. Detectives from Upper Dicker constabulary’s forensic team later established that the teabag had become wedged in the entry to the teapot spout during pouring, causing the flow of tea to diminish to a trickle.

EPIDEMIC FAILS TO MATERIALISE
The Beyondenden Chronicle
Sadly, this newspaper’s recent prediction of a catastrophic zombie outbreak in Beyondenden which, we warned our readers, could result in 50,000 angry undead, failed to live up to our expectations. We understand that on our advice, many of you built elaborate, secure shelters and stockpiled food and weapons in order to protect your families from marauding hoards of walking corpses. We offer readers our full and unconditional apologies, in the sincere hope that your loyalty will remain undiminished, regardless of the tragic unintended consequences of this misinformation.

MALE STRIPPER STOLE BILLIARD BALLS
The Chiddingly Tricycle
Torville Wellington, a wallpaper remover of no fixed abode, was remanded in custody, accused of possession of illegally acquired items; namely three billiard balls (one red, two white) which, it is alleged, he concealed about his person and then removed from the Temperance Billiard Hall, Chiddingly, without prior permission.

SOCCER LATEST: WARRIORS ON THE UP
Since Hastings & St Leonards Warriors’ inexorable plummet to the bottom of the Nuclear Waste Disposal Solutions League (South), caretaker manager and former Warriors’ ruthless enforcer Nobby Balaclava has taken the team to four successive narrow defeats, a club record. Last Saturday’s 7-0 defeat by Herstmonceaux Cannibals was a case in point. “I’m proud to be associated with this great club,” Nobby told us the morning after the match, when we met at The Withered  Spoon for its famous ‘All Day Brexit’ – a pint of Cider, two shots of Sambuca, a margherita and a lightly boiled egg, £7-75 with a free muffin.
“To be fair, the result  has delighted the fans. Once they scored that seventh, I signalled the lads to revert to 11-0-0 with a flat back 10 and it worked a treat. Goalie Tim Smegma did a great job considering he couldn’t see any of the play and we pegged the score at 7-0. So far this season we have failed to concede less than eight goals. If we continue this positive upward curve we could be only losing 2-0 come the 2023/24 mid-season. That’s progress whichever way you crumble the cookies”. As we were leaving, he borrowed a felt tip pen from a barmaid and scribbled next week’s team selection on the bald  head of the unconscious man at the next table, before punching a waiter and running upstairs, where he exited via the window of one of the pub’s immaculate toilets and was later tasered by police. I was able to capture this exclusive  preview of next Saturday’s Warriors’ squad with my smartphone:

Tweet
This entry was posted on 19 March, 2022 in homepage and tagged Colin Gibson, Sausage Life 221. Bookmark the permalink.