Last Chance for Animals in Ukraine To Survive 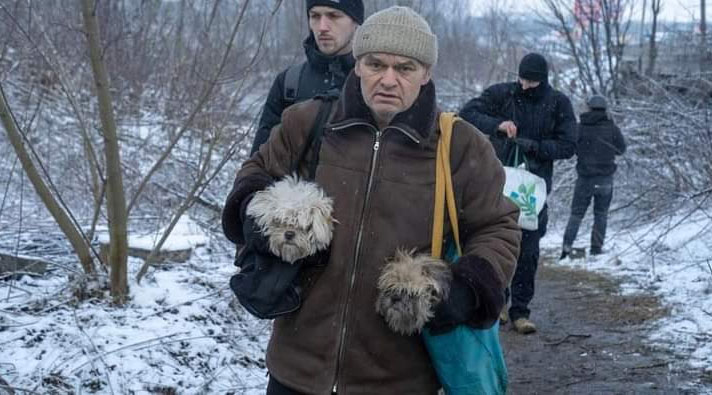 Link to the visuals for social media

Link to the photos

Our team has prepared detailed reporting — with direct quote sources and on-the-ground updates about the devastating situation in Ukrainian animal shelters.

We’d be happy to provide extra information — translations, quotes, or access to sources, photo and video materials — for your organization to cover the events.

Since the war in Ukraine erupted in the early hours of Feb, 23rd, thousands of volunteer-led animal shelters have been fully cut off from the supplies. Risking their lives, volunteers still attempt to evacuate the trapped animals or at least deliver food supplies to facilities, located amidst ranging warzones.

As of March 10th, over 5,000 animals are stranded across the country in Kyiv Oblast’, Mykolaiv, Kharkiv, Mariupol, and other hot zones.

“The situation with animals and shelters is just awful. We know about the shelling of at least 4 shelters in Ukraine, which were intentionally or accidentally hit by a bombshell. Many animals died. In Mykolaiv as a result of the selling by Russian

occupiers 100 cats in the shelter were lost. Two employees of the Feldman Ecopark (Kharkiv) were shot by the Russians when they came just to feed the animals.”

Apart from deliberate shootings, Russian forces are denying humanitarian corridors to allow animal volunteers to access affected areas and bring in supplies or transport the animals out to safer zones. 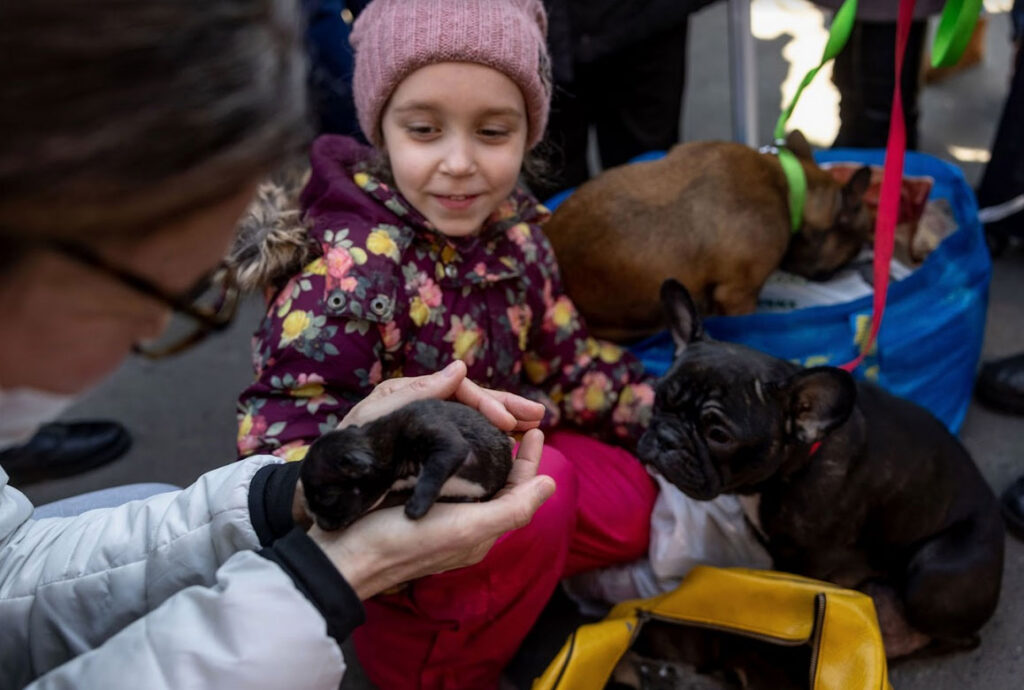 Over 3,000 animals and volunteers are trapped in the county’s largest shelter, Sirius, located in the Dymer community, 60 km north of Kyiv.

“Since February 24, “Sirius” has been under blockade. There is no access to the shelter: all the routes are blocked by the Russian occupiers. They do not allow the transportation of food or medicine for people and animals of the Dymer community. People and animals are on the verge of a humanitarian catastrophe. There is no electricity in the community and animal shelter, no water, no cellular connection, and no Internet, there is constant shelling.

As for the shelter – the animals there are very scared by shelling and the sounds of war, they are trying to escape, they are getting injured. Two dogs are in critical condition, three dogs, unfortunately, died. Pet food is available until Saturday. We are very grateful to the locals who give us cereals, potatoes, beetroot, carrot, offal almost for free or even for free – and we are able to feed the animals. All attempts of volunteers and humanitarian organizations to transfer aid to the territory of the Dymer community mostly end with shelling by the Russian occupiers.

We are negotiating over the possibility of evacuating our animals, but the main issue today is the lack of a safe passage, a “green corridor”.”

Further updates from “Sirius” are available via their FB page.

Hostomel shelter is one of the oldest shelters in the country, where over 700 animals and 4 people remain stranded since the start of the war. Local volunteers have already survived two weeks of heavy shelling with nearly all urban infrastructure destroyed.

The shelter has been hit by shells three times and attacked by a tank. As of March, 10th Hostomel shelter team reports:

The volunteers urge local and international animal organizations to intervene and facilitate the establishment of safe passage before all the animals are dead.

“Best Friends” shelter, located in Makarivs’kyi district of Kyiv Oblast’, was deliberately targeted by Russian troops on March 1st. The shelter is situated in a remote rural area, miles away from any object of military significance.

Over 900 animals were at risk of dying when the shell hit the facility, causing a major fire. Volunteers managed to release some of the animals from their enclosures — but over a hundred died in the fire.

“Our shelter is bombed to the ground. But we didn’t abandon our pets. Two brave volunteers come to visit it each day — our manager Kristina and her husband. Under heavy gunfire, they keep coming to feed the animals, who are now roaming in the nearby village and across the fields. We are waiting for a miracle to evacuate our animals. [Humanitarian aid] already tried to reach us — but they weren’t allowed to pass.”

Photos and videos of the current situation are available on Best Friend’s Facebook page.

In Kharkiv, an animal shelter was hit by a shell on March, 8th. 293 dogs were at the premises during that time. Five dogs died and five enclosures were ruined. Six more dogs got different wounds — Animal rescue Kharkiv, Ukraine NGO reported.

Feldman Ecopark — a private zoo, located in Kharkiv Oblast’ — was also shelled by Russian forces on February, 24th. Five shells exploded on the territory with many animals severely wounded or killed.

On March 7th another attack was carried out on the Ecopark. In a posted video, the Ecopark owner, Alexander Feldman says:

“Two volunteers entered the park to try and feed the animals. They were met with gunfire and shot dead by the occupant forces. […].Yet, we are doing everything we can to save the animals in the Eco Park and not endanger humans.”

On March 5th, a shell hit a two-story building, located in Kalinovka urban settlement, Mykolaiv Oblast’. The building housed a local animal shelter. Over 20 animals died in the fire. Two people in the nearby house were wounded and taken to the hospital.

UAnimals and international news outlets also reported the death of three animal volunteers, who attempted to bring in animal food and evacuate some animals in the Bucha town in Kyiv Oblast’.

Their vehicle was attacked by Russian soldiers, operating in the area before they could reach their destination. All three died on the spot.

Ukrainian volunteers keep supporting animals despite grave risks to their lives, but need your support!

However, without wider awareness from the global animal rights activities and urgent advocacy for establishing safe humanitarian aid passages, wider efforts cannot be carried out.

We’d be happy to provide further reporting, quotes, and fixing with local sources for you to cover the grave situation in Ukraine.

We need greater coverage and awareness among international NGOs and governments to pressure the Russian forces to establish safe passage and green corridor and stop killing innocent people and animals! 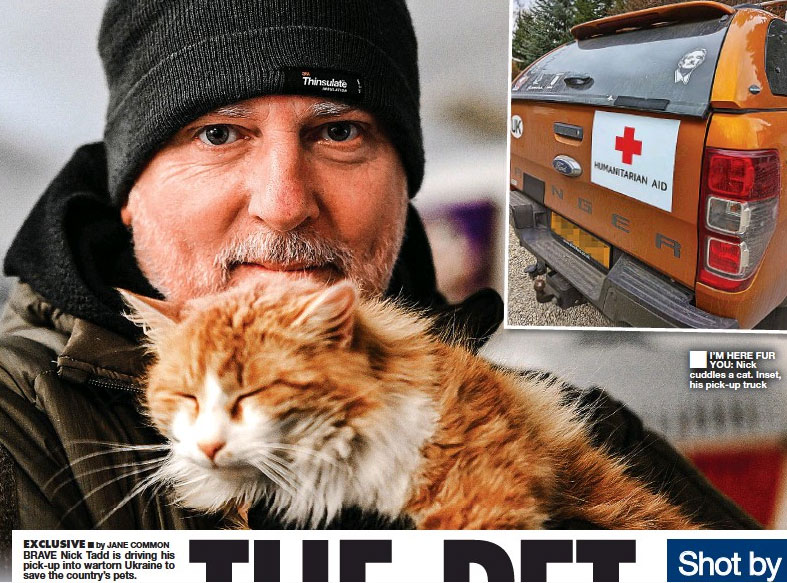 View all posts by Heidi →
This entry was posted on 13 March, 2022 in homepage. Bookmark the permalink.

One Response to Last Chance for Animals in Ukraine To Survive