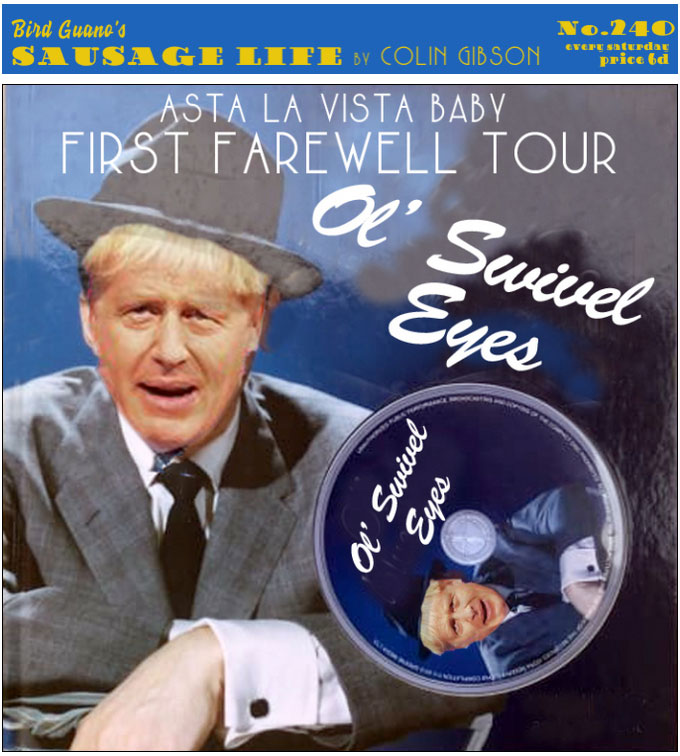 READER: It’s a bit early for Easter eggs isn’t it?

MYSELF: Buy as many as you can and bury them in a secret location. I had a hot tip off that bloke who does bitcoin.

WE’LL BE RIGHT BACK AFTER THIS MASSAGE
Men! Tired of boring exercise and rigorous diet regimes? Fed up with cruel taunts like “Who ate all the puddings?” and “When’s the baby due”? Don’t despair, Gordon Thinktank Flab Solutions may have just the thing for you. NomorGym the elasticated silhouette improvement trousers for gentlemen are guaranteed to improve your social profile and make you one of the beautiful people. NomorGym Is available in large, extra large, avocado, magnolia and Pino Grigio.

RACING TIPS by Nostradamus
A perfectly preserved document believed to have belonged to Nostradamus himself has been unearthed during Upper Dicker Council’s recent purge of Grade 1 listed buildings. Written in Latin on a scroll of vellum parchment with a 16th century fountain pen, it is thought to be one of the earliest examples of the great seer’s eerie prescience. Here is a short excerpt.
On 23 July 2019, a chestnut mare called Spaffer’s Folly will romp home at 33/1 in the 3-30 at Chepstow, heralding the arrival of Satan and the Four Horsemen of the Apocalypse. Borne on a tidal surge of the great river in the north, unwelcome visitors will bring giant poultry to defeat the usurers.

MONDAY September 13th: I agree to meet Twollet the Greengrocer in town for ‘a cup of coffee’. He insists we rendezvous at The Sheep & Squaddie, a squalid public house frequented by roughnecks, countering my temperate objection with “You don’t have to drink alcohol old boy, they do splendid coffee in pubs these days”. Much to my regret, I order Irish coffee, not realising it contains whiskey, and after my fifth, begin to feel a trifle woozy. Twollet shows me his recently acquired tattoo, Antelope Pursued by Jaguar; executed in the style of Tracy Emin, which I, in my now rather inebriated state, fancy to be rather tasteful. The next thing I remember is sitting with Twollet in the waiting room of a particularly salubrious tattoo parlour, looking through a catalogue of designs. The rest of the afternoon occupies a gaping black hole in my recollection.

TUESDAY 14th: Awake from a terrible nightmare in which thousands of ants are marching over my belly wearing tiny spiked running shoes. Bleary-eyed, I pick my way through discarded items of clothing to the semi-wreckage of the bathroom, where I am confronted with an unimaginably terrifying reflection in the mirror. I see, on my lower abdomen, a large, raw and still bloody tattoo of The Eiffel Tower, which emerges from my pyjamas and points obscenely at my chest. What happened? Myriad thoughts pass through my head at an alarming rate, not the least of which is; I will never be able to go swimming again.

Later that same day, Celia Badwig calls, and tells me I look as though I am coming down with something, but I have not the heart to let her in on my secret. I telephone Tarquin, my eldest, who lives in London and knows about such things, and explain what has happened. I hear him come dangerously close to choking, and when his guffawing and snorting has eventually subsided, I reluctantly ask his advice. This sets him off again. “Twollet! The Eiffel Tower! Hahaha!” he giggles, almost weeping with mirth.
“Never mind that idiot,” I shout, “You have to help me! I must have this monstrosity removed, before anyone sees it.” He tells me to “keep my hair on”, as he knows someone “who knows someone”, and is going to “make a couple of calls”.

THURS 15th: I have been housebound since the tattoo incident, for fear of anyone finding out, although I suspect the loose-tongued Twollet has already let the goose out of the sack. At last the telephone rings. It is Tarquin who says he’s been put on to a man who can “sort out my problem”. As instructed, I catch a train to London, and make my way to the Tutankhamen Café in Paddington, where a man wearing a camel coat and reading The Racing Times is waiting for me. His thin pencil moustache does not fill me with confidence, nevertheless I allow him to escort me to his ‘clinic’, a shabby looking place with a threadbare carpet in the back room of a betting shop. He tells me his name is Cuthberto and instructs me in broken English to lie on the stained velvet chaise longue, and lift up my shirt. After a long whistle, and what I took to be a supressed smirk, he tells me it’s a major job that will require a general anaesthetic. With no other options, I find a cheap hotel nearby and agree to turn up early next morning with an empty stomach and £500 in cash.

FRI 16th: As I regain consciousness, I am surprised to find I am not in too much pain. I cock my wrist to see what time it is. My watch is gone, along with Jesus, the strange Mexican anaesthetist, the ‘surgeon’ Cuthberto, and my wallet. Nevertheless, I dash eagerly to the mirror, and lift my now grubby nightgown.
NO!…! The dreaded thing is still there! The only discernable difference being that The Eiffel Tower has had the word CANCELLED tattooed over it. Livid with rage, I decide to erase Twollet from my address book altogether, and unfriend him on Facebook.

View all posts by Colin →
This entry was posted on 3 September, 2022 in homepage and tagged Colin Gibson, SAUSAGE LIFE 240. Bookmark the permalink.