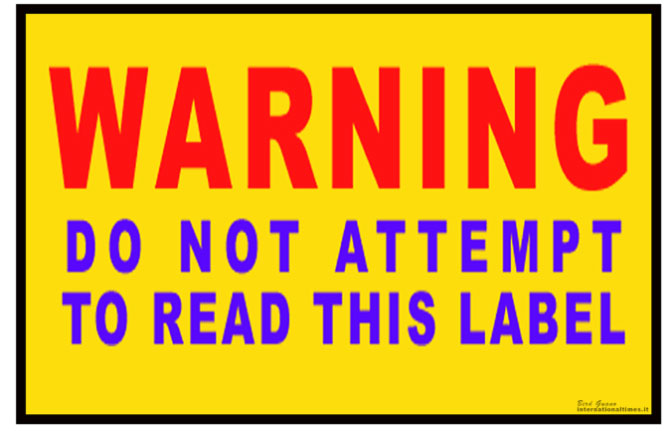 READER: That’s a deliberately inflammatory statement.
MYSELF: Inflammatory, that’s a conservative voter who’s set himself on fire isn’t it?
READER: Very droll. The trouble with you is you can’t take anything seriously. There’ll
be no room for that type of cynical remark once Nigel Farage gets in.
MYSELF: I know. It’s the end of an era, as Van Gogh’s dyslexic doctor correctly
diagnosed when Vincent turned up at his surgery with his head swathed in bandages.
READER: Exactly. ….Now how about some proper column stuff, handy hints, pop gossip, interesting facts from around the world, that sort of thing?
MYSELF: OK, (choking back tears), you’re the boss.

BLIMEY! – Fascinating items from around the globe
JAPAN: Turkish plumber Mustapha Habababa murdered Yoko Nagasaki, a Tokyo cinema usherette, after a simple misunderstanding. The Turkish word for hammock is exactly the same as the Japanese word for ventriloquist.
UK: Bill, a 4 year old Bedlington terrier brought 27 miles of the A324 to a standstill when he mistook a 45 tonne articulated lorry containing toxic waste for a tennis ball.
NEPAL: A woman in Pangapanga, arrested for playing the accordion whilst menstruating, has had her left foot amputated and turned into an umbrella stand for elephants.
USA: A 72 year old man in Nosferatu, Texas, has divorced his wife of 47 years, after discovering her secret hoard of over 53,000 Bombay tram tickets concealed in hollowed out pumpkins.
FACT: All the white dogshit has gone to China to make toys

READER: China! I might have known! This is more like it.  By the way I just got the
Van Gogh joke.
MYSELF: Well done. And did you know that if you drink five gallons of wallpaper paste and hold your nose, you can fart through your ears?
READER: Really? Through your ears?
MYSELF: Yes, and furthermore they’ve taken the word gullible out of the dictionary.
READER: No way! That was one of my favourites!
MYSELF: Mine too, along with remoaner, libtard and moron.
EADER: I hope you’re not going to tell me they’ve been taken out as well.
MYSELF: Unfortunately they are still very much with us.

HAMBURGERS CONTAINED HORSE
Government hygiene inspectors raided the recently reopened Hastings restaurant RIPE earlier this month. The premises were sealed off with scene of crime tape and police officers stood guard, as food analysts in white decontamination suits entered the building carrying racks of scientific equipment. Although all refused to comment, we have since been informed by a reliable source that the restaurant, which boasts only food manufactured from fibreglass, is suspected of serving its customers fibreglass hamburgers containing fibreglass horse. Manager Norman Rude (72) of St. Leonards, when presented with the evidence, confessed: “Yes, there was an incident with a burger and yes, it did contain traces of fibreglass horse. I mean traces in the sense that the patty enclosed in the fibreglass bun was actually completely composed of fibreglass horse. Since we reopened as Hastings’ only establishment catering exclusively to the fibreglass-tolerant community, we have been more or less fully booked every night. Although these circumstances were completely beyond our control, our customers were, rightly, unamused. Rumours that this incident, or anyone involved in the management of RIPE, was in any way connected with the recent kidnapping of fibreglass thoroughbred racehorse Gulzar’s Folly from its paddock, are entirely unfounded. I would stress that according to experts, fibreglass horse is no more harmful than fibreglass beef when consumed in moderation”.

HICCUP SORCERY
Professor Gordon Thinktank has come up with what he claims is the “definitive hiccups cure”, which he hopes will be approved by the General Medical Council in time for the summer. “Hiccups,” the inventor told us, “is a vastly underrated threat. The great tenor Caruso, for example, after a weekend vodka binge in a Turin bar, suffered from an attack which lasted over three years. The constant hiccupping rendered him totally incapable of performing live, and every recording from that period had to have thousands of hiccups edited out by skilful audio engineers before it could be released”.
The professor, when pressed, would not reveal details of the cure, adding only that it would be available at all branches of Wetherspoons.

SPONSERED ADVERTISMENT
Is your best friend a writer? Why not enrol your dog at World Of Dogs School of Canine Journalism. Free poop ‘n scoop or squeaky toy when you apply online. www.worldofdogs.net

READER:  Sponsored ads? I mean really….. aren’t you making enough money?
MYSELF: Honestly, All I get out of it are a few doggy treats.
BARGAIN BASEMENT
Large antique washbasin (c1880). Still has original water, with bits of whisker and toothpaste spit. £375 ono.
Pack of three German super strength condoms. Used once only but knots difficult to untie, hence £5. NO TIME WASTERS.

And before I forget, here’s a couple of handy hints, at no extra charge:

1. A seagull superglued to the bonnet makes an excellent car alarm.
2. When out foraging, never eat anything surrounded by dead animals.
3. A lot of people forget about warm revenge. If your having a barbecue in
frozen lake, a bowl of warm revenge, perhaps with a glass of mulled Schadenfreude, is just the ticket for restoring the circulation, and bringing a warm glow to the cheeks.

View all posts by Colin →
This entry was posted on 18 June, 2022 in homepage and tagged Colin Gibson, SAUSAGE LIFE 233. Bookmark the permalink.