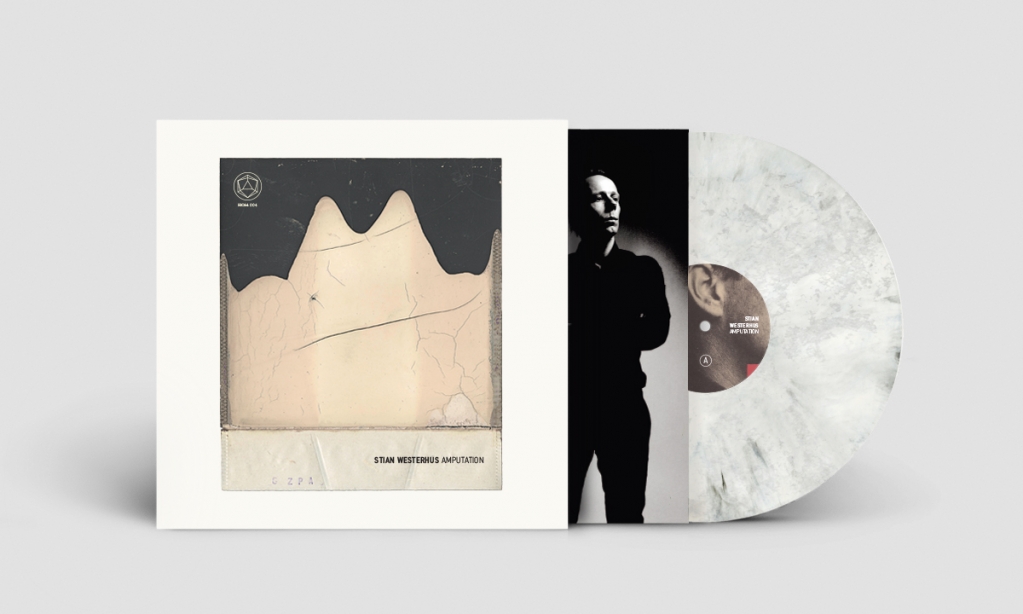 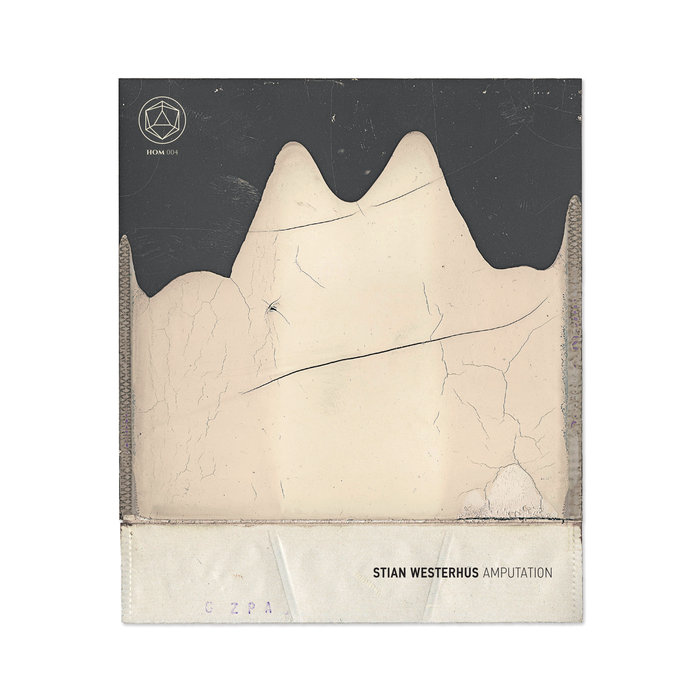 In the fight between our two major organs, the heart is its own unique instrument. Stian Westerhus’ new album Amputation newly released on Mark Lewis and Kristoffer Ryggs visionary House of Mythology label is an uncanny statement on that particular strain of music and its attempts to express inner feeling and outward action. Comprised of six consciousness shredding pieces, this beautifully designed object transcends its physical CD form and allows for transformation to take place on many levels in and around the listener. The compositions all feature Westerhus on voice, electric guitar and drum machine, but this is no lonely outpouring made in a cramped bedroom. Here, all three performative elements combine to influence each other, with plaintive solo Frippertonic style guitar transmogrifying into celestial discord on album opener Kings Never Sleep, and indeed the more extreme textures of the aforementioned Fripp in his royal guise as King of all things Crimson is in evidence at times, albeit balanced by the jonsi like vocal approach that Westerhus makes entirely his own.

Indeed, each composition explores the extremes that this combination of musical forces can allow, as melodies are stated, deconstructed, examined  in separation and left, either partially truncated, or else resolved by a thoroughly affecting rearrangement of motifs. Sinking Ships, the second pieces does this superbly and as Westerhus vocalises in transcendently elegant spirals of growl and falsetto, in combinations of English and  Norweigan soundings, he seems to comment on and complement what the music is doing beneath his fingers. Regardless of whether this album was composed or recorded in a small studio or bedroom, Westerhus defies the notion of the solo songwriter seeking sustenance or muse, as he takes on the form of musical shaman as the reverberations of guitar and treated percussion bring the ceiling to the floor and then, more importantly, propel that floor skywards in arcs of aspiration.

These pieces are not just songs, even if they reference that trusted form, they are something else as well, at once higher and in some way far more mature than the still forming youngster forever searching for his lost middle eight. As Westerhus sings of ‘tracking through the snow, he too is rising ever higher, literally elevating the form he has chosen for his own expression. He is separating the areas necessary to do that and providing the amputation that leads to renewal. This is so called cerebral music achieving a full pitch of emotion and showing that the progressive, experimental and even avant garde sections of record shops anywhere (as opposed, sadly, to everywhere) are where you will find what new music is actually for.

How Long capers in a haphazard spangles of treated guitar notes as the protagonist struggles to make his way across his encumbered and heavily burdened eight and a half minute landscape. As his musical feet rise through ice and snow, angelic distortions and variation allow release and transformation, as if the journey was being handled by the most skilled of dramatists and film makers. Indeed, that is the main impression here, that Westerhus has a unique understanding of the elements of drama. These reside not just in the areas of text or content, but far more in those of structure, texture, contrast and tone.

Title track, Amputation starts with a virtual avalanche of noise, combining drone, buzz, squeal, pulse and reverberant apocalypse in the making; a storm of noise emanating from one man, who in acting as his own producer is also able to control the elements of his own alchemy to stunning effect. Here, music becomes the landscape it can be seen to emerge from as opposed to just reflecting it. As the controlled chaos achieves mastery, Westerhus’ sung ghostly refrains are, if not a soothing wind or passage of air or light through the darkness, then certainly some sort of promise of reformation. The pain of amputation as a concept in itself is echoed here, not just as a physical event but as a spiritual one, the organ rattling its own inner keys as removal occurs, with the eventual recovery glimpsed as a long lost goal, suddenly drawing ever closer on a cloud of steel winged electronica, as if the guitar was summoning the angels of return to deliver us into a form of salvation.

‘Choose between the bright lights and the city walls’ Westerhus sings not just as a way of defining yourself as something freed or contained but as someone conducting and rearranging their own consciousness, imposing and fusing it on the environment that forms and surrounds them at once.

In its opening moments, Infectious Decay channels Radiohead with its skittering beats and use of Westerhus moving between high and low vocal registers. However, like the best music the piece and its composer soon shows why a possible reference has been used in a certain way and the propulsive beat is soon embedded into the melodic treatment and transformed. Limited modes of expression are revealed as the true means of achieving something expansive and indeed greater and Westerhus as player, programmer, singer, structuralist and conductor of the listener’s response proves himself to be a maestro in the best sense in which that term is useful for a rock/modern music style audience; He is attempting to change how we experience the song as both cultural object and totem in itself. Songs speak to the heart just as rhythm appeals to the body. This album seeks to wrench these functions apart and examine them in ways that are as instinctive as they are expert. Rhythmns are distributed and disseminated. Melodies are watered and contained. The listener’s response is the true home for the harmonies separate to those provided by Westerhus’s vocals and the barrage and explosions of distortion which come unbidden in closing track, Amputation Part 2 allow us to reach for the calmer moments we have previously experienced in order to reunite the parts of ourself that have been torn asunder. As the album reaches its conclusion the music literally breaks apart, allowing us to piece together the remnants of our own passage through it.  Music is the highest and most effective of all the artistic forms. In this one forty minute, exquisitely packaged album, Stian Westerhus has showed us how the amputations faced everyday by everyone of us that often go unrecognised contain the root of connection to everything around us. Broken and beaten and unaware of both our own pain and avenues of redemption, we may lose ourselves in the obfuscation and snow we place around and before us. Thankfully, from that possible sense of obliteration, a new and cleansing cold is approaching, in which all of our wounds may be healed.

Supported by the Arts Council Norway, Amputation has been nominated for a Norweigan Grammy. That an album of such ferocious beauty and anger garners  awards shows us closer to the Mediterranean drift that so called ‘art music’, if that is the correct term, need not have the glacial politeness of ECM to achieve its own glistening state of grace. The sun coasts the ice and brings with it, colour. Long may your Angels attend.

View all posts by David →
This entry was posted on 12 January, 2017 in homepage and tagged Amputation, David Erdos, House of Mythology, Kristoffer Ryggs, Stian Westerhus. Bookmark the permalink.

One Response to Separating The Heart