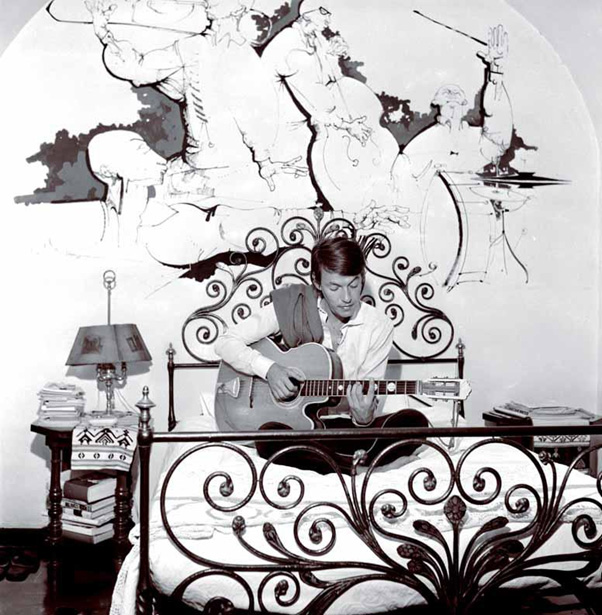 Fabrizio De André … The anarchist, pacifist libertarian, songwriter, poet of the poor and the marginalized, “the voice of truth” of the prostitutes, drug addicts, thieves and drunkards and of the sad facet of Genoa.

From these bitter truth De André oozed a precious nectar which he shared through his highly distinctive poetic lyrics, and his music.

Yes, his lyrics are real poetry, deeply vibrant and overflowing with a profound instinct for rebellion –an uncontrollable desire to share the pain he saw around him by peering into some of the deeper folds of feeling. He penetrates their essence and with a sly irony returns with a song that he conveys with a magical passion  that is uniquely his own. De André is a man with a rebellious streak but also with a fragile and a sensitive soul. He reflects the world’s merciless reality. In his verses and music he unleashes an anger and a desire for a noble revenge. 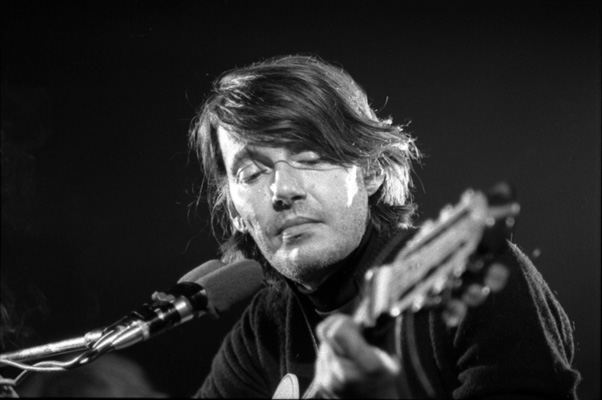 Considered by most critics to be one of the greatest Italian anarchist and singers of all time, he is often referred to by his nickname “Faber”, given to him by his childhood friend Paolo Villaggio in reference to his penchant for the pastels and pencils made by Faber-Castell.

In almost forty years of artistic activity, De André  recorded thirteen studio albums, plus some songs that were published only as individual items and then collected in anthologies.

The popularity and the high artistic level of his work and its content were to prompt several Town Councils and Institutions to dedicate streets, squares, parks, libraries and schools to him in the years following his sudden death. 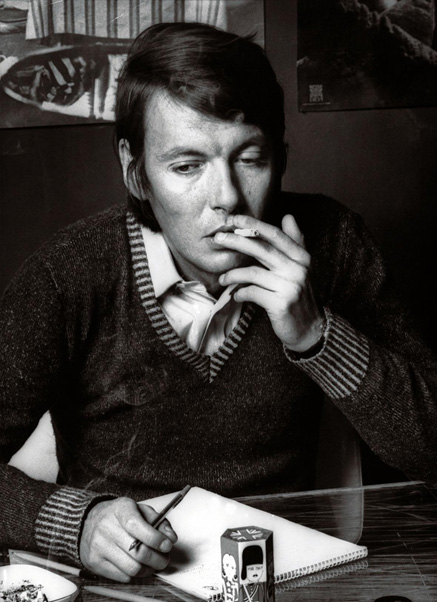 An honest man, an upright man
tralalalalla tralallaleru
found himself with his heart aflame
for a woman who didn’t feel the same.

So he went and killed his poor mama.
tralalalalla tralallaleru
He yanked her heart right out of her chest
and went back to his love thinking she’d be impressed.

He opened all the veins in both his wrists,
tralalalalla tralallaleru
and as the blood spurted out of his veins,
he ran like a madman to see her again.

And while his color faded away,
and his blood slowly dripped to the ground,
her vanity thrilled, for she could say:
a man had killed himself to try and bring her round.

Gently and sweetly blew the wind outside
tralalalalla tralallaleru
but suddenly she found herself dissatisfied
when she saw that he was happy as he died.

Happy as he died, and in love it seemed
while she got nothing from all his pains:
not his love, nor his esteem,
only the drying blood flowing from his veins. 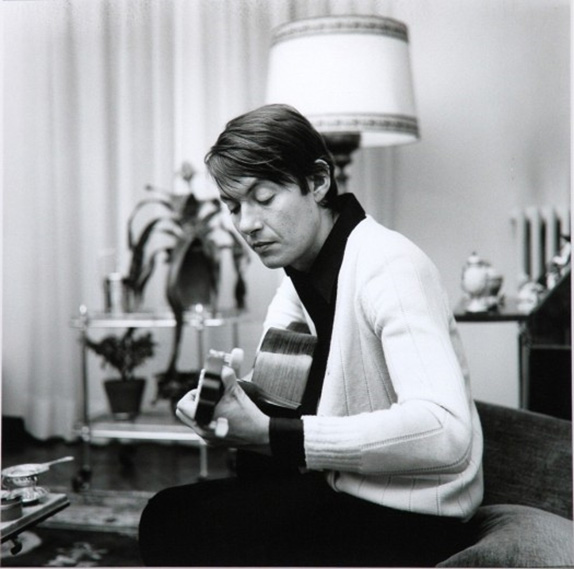 a young girl sings the song
that whores have used so long
to broadcast their charms:

what you still don’t know
is something I can show
you only here between my arms.

And if, with her young years,
her competence is clearly
open to question

a little practice will
give her all the skill
she needs for perfection.

when a person had to
have a real vocation
just to be a simple whore.

four retired old boys
(and one and all half-poisoned),
passing the time.

And come rain or shine,
this is where you’ll find them,
always together

They’re just searching for
a little happiness,
inside a glass

Some small joy there’ll be,
in their agony,
with wine on their lips

and across their face
a little smile will race,
as they all cash in their chips.

Elderly professor,
in that darkened hallway,
who comes to meet you?

Could it be the only
one who still has got
something to teach you?

The one of whom, by day,
with great contempt you say
that she’s a wife-at-large;

the same one who by night,
adjusts to your delights
the prices that she’s going to charge.

As you close the door,
you’ll feel you need some more
if you’re to get your fill,

putting off until
the last day of the month
paying the bill.

And when you cash your pension
check you’ll find there’s nothing
left to enjoy.

Down towards the port,
where the air is fraught
with smells of decay

thieves of every kind
and murderers you’ll find,
come night or day.

you’ll see the crazy guy who,
for three thousand lire,
sold his mother to a dwarf.

An upright citizen’s
opinion of such men
is bound to be harsh:

You’ll probably think that they
should all be locked away
to die behind bars.

if they’re not pure inside,
they’re still their mothers’ pride;
they’re victims of society. 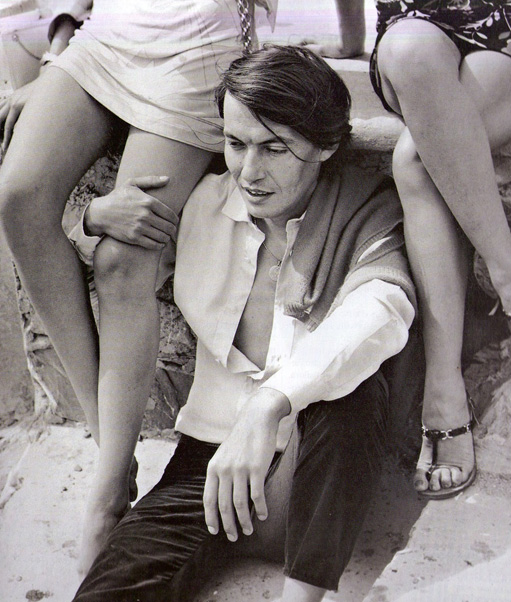 When her train pulled into Sant’Ilario
by the time she had stepped to the ground,
the welcoming crowd, at a glance, saw it wasn’t
the Church that had sent her to town.

There are some who make love for a living,
others have nothing better to do.
Bocca di Rosa, she wasn’t like either:
love was her passion through and through.

But a life in the service of passion
often will lead you from bed to bed
without first finding out of your lover
whether his heart’s free or whether he’s wed.

And so, from one day to another,
Bocca di Rosa found herself prey
to the menacing wrath of those bitches
whose bones she had taken away.

But a village’s meddling gossips
great initiative hardly display,
so up to this point their revenge had been merely
to hurl a few insults her way.

Thus an elderly unmarried woman,
whose heart now within her was ice,
felt required to offer these villagers
the benefit of her advice.

And approaching the cuckolded wives,
she addressed them in words shrewd and wise:
“We can bring the love thief to her knees
if we call on the proper authorities.”

So they went to speak to the Police Chief,
and letting all niceties drop,
said “this baggage has too many customers –
even more than the local co-op.”

Now your average cop’s never too happy
to show up for work; but he’s vain;
so dressed in their finest regalia
they put Bocca on the first train.

There was a yellow banner
and on it, written in blue
it said, “Goodbye Bocca di Rosa. When you leave us,
Spring takes its leave of us too.”

News of such strange goings on didn’t need
to be published in print to get round;
and in no more than just a few minutes they’d heard
all the details in the next town.

So though many had bid her farewell when she left,
there were even more at the next station,
throwing kisses and flowers at Bocca di Rosa
and trying to make reservations.

Even the parish priest who enjoyed,
between saying Mass and Confession,
the ephemeral pleasures of beauty, decided
he wanted her in his procession.

So in front of them all went the Virgin
and Bocca di Rosa followed in train,
and the priest took the two of them out for a walk
love sacred and love profane. 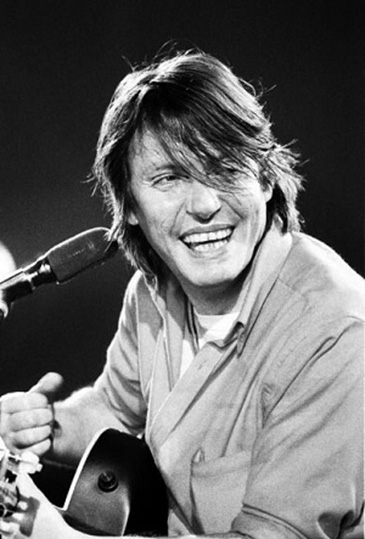