Garrison Keillor, who owns a bookstore in St. Paul, Minnesota, called Common Good Books, writes in a foreword to FOOTNOTES* from the WORLD’S GREAT BOOKSTORES: *True Tales and Lost Moments from Book Buyers, Booksellers, and Book Lovers that “the little independent bookstore is dying out, they say. Too bad. Someday mine will, too.”

The author of the book, New Yorker cartoonist Bob Eckstein, hopes not. He spent two years collecting more than 300 bookstore stories from around the world, narrowing his selection down to 75 and pairing them with his own illustrations. Eckstein made sure to start with a bang. Here are the first two: 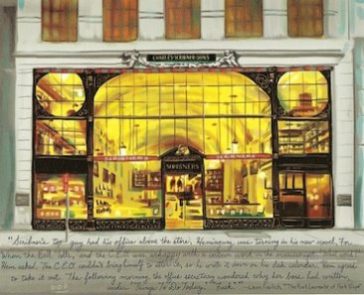 “Scribner’s top guy had his office above the store. Hemingway was turning in his new novel, For Whom the Bell Tolls, and the C.E.O. was unhappy with a certain word in the manuscript. ‘What word?’ Hem asked. The C.E.O. couldn’t bring himself to utter it, so he wrote it down on his desk calendar. Hem agreed to take it out. The following morning, the office secretary wondered why her boss had written under ‘Things To Do Today,’ ‘Fuck’.”
— Leon Freilich,
The Poet Laureate of Park Slope 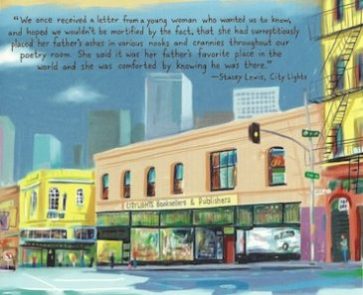 “We once received a letter from a young woman who wanted us to know, and hoped we wouldn’t be mortified by the fact, that she had surreptitiously placed her father’s ashes in various nooks and crannies throughout our poetry room. She said it was her father’s favorite place in the world and she was comforted knowing he was there.” 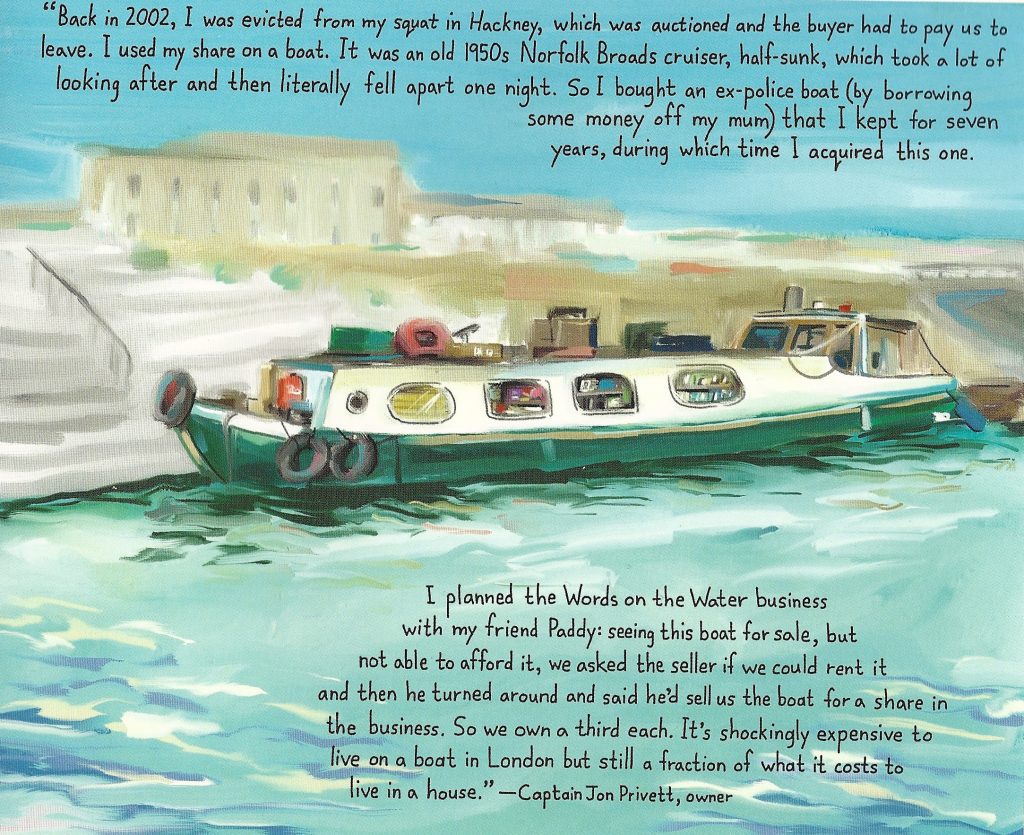 Words on the Water
[2011-present], London
ANECDOTE
Back in 2002, I was evicted from my squat in Hackney, which was auctioned and the buyer had to pay us to leave. I used my share on a boat. It was an old 1950s Norfolk Broads cruiser, half-sunk, which took a lot of looking after and then literally fell apart one night. So I bought an ex-polie boat (by borrowing some money off my mum) that I kept for seven years, during which time I acquired this one.
I planned the Words on the Water business with my friend Paddy: seeing this boat for sale, but not able to afford it, we asked the seller if we could rent it and then he turned around and said he’d sell us the boat for a share in the business. So we own a third each. It’s shockingly expensive to live on a boat in London but still a fraction of what it costs to live in a house. — Captain Jon Privett, owner
. 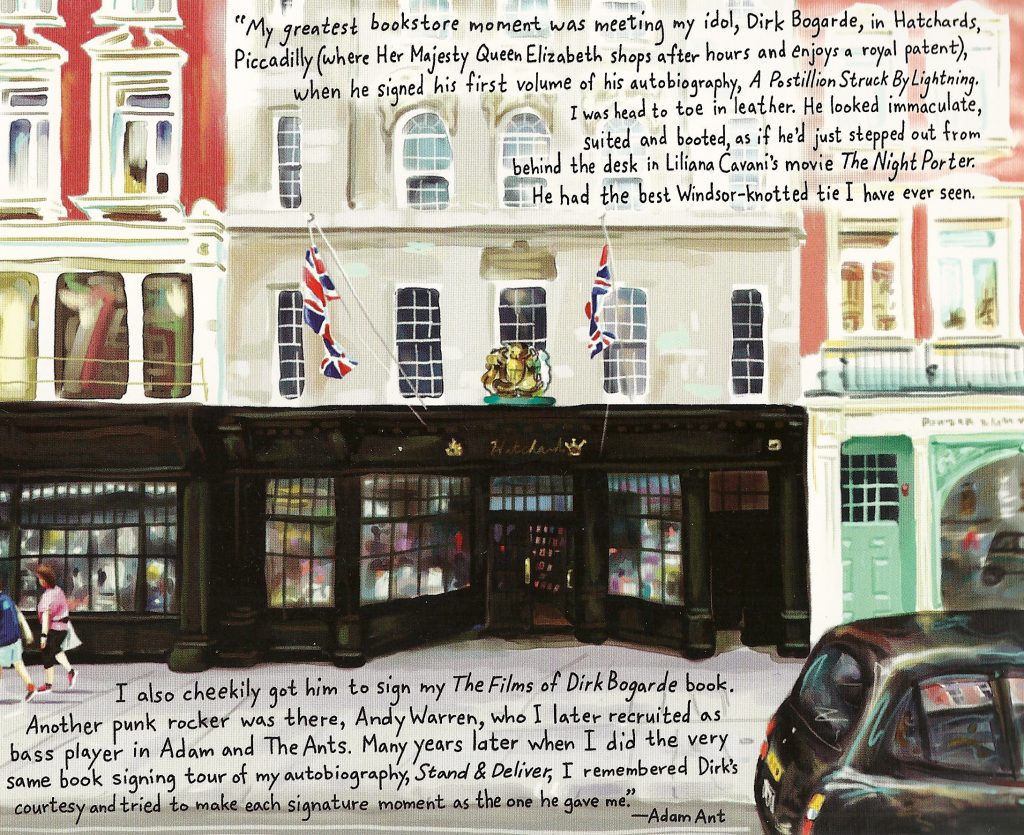 Hatchards
[1797-present], London
ANECDOTE
My greatest bookstore moment was meeting my idol, Dirk Bogarde, in Hatchards, Picadilly (where Her Majesty Queen Elizabeth shops after hours and enjoys a royal patent), when he signed his first volume of his autobiography, A Postillion Struck By Lightning. I was head to toe in leather. He looked immaculate, suited and booted, as if he’d just stepped out from behind the desk in Liliana Cavani’s movie The Night Porter. He had the best Windsor-knotted tie I have ever seen.
I also cheekily got him to sign my The Films of Dirk Bogarde book. Another punk rocker was there, Andy Warren, who I later recruited as bass player in Adam and The Ants. Many years later when I did the vey same book signing tour of my autobiography, Stand & Deliver, I remembered Dirk’s courtesy and tried to make each signature moment as the one he gave me. — Adam Ant
. 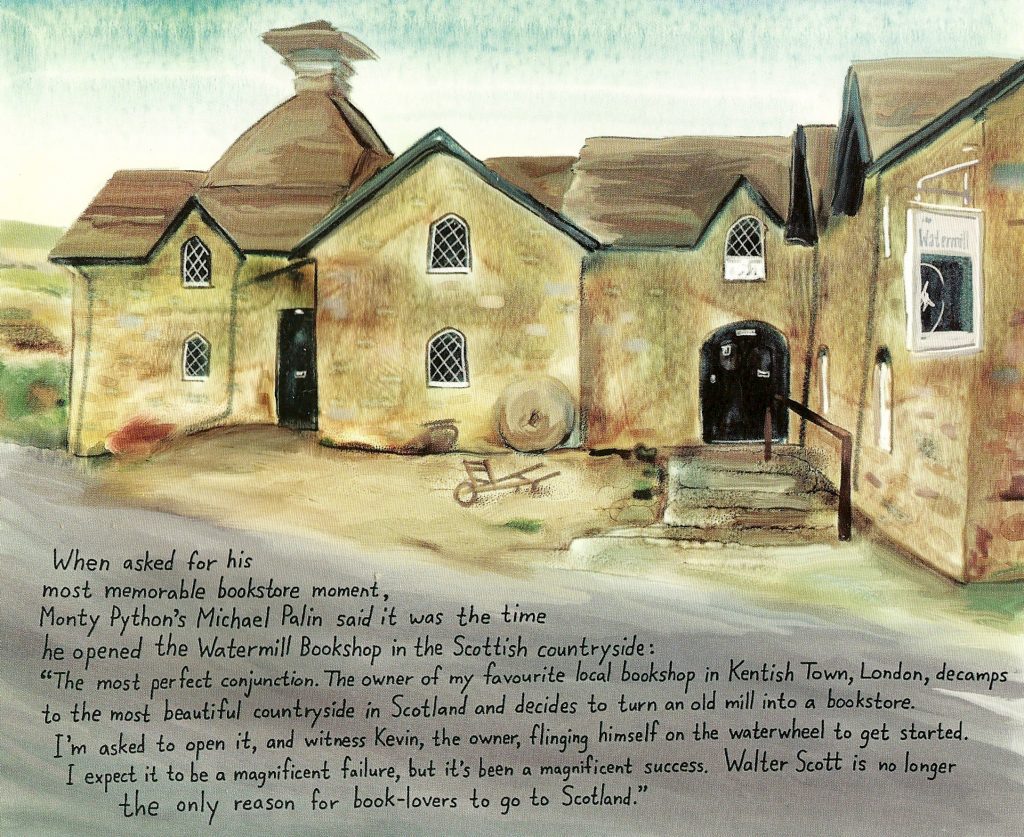 The Watermill Bookshop
[2005-present], Aberfeldy, Scotland
ANECDOTE
When asked for his most memorable bookstore moment, Monty Python’s Michael Palin said it was the time he opened the Watermill Bookshp in the Scottish countryside: “The most perfect conjunction. The owner of my favourite local bookshop in Kentish Town, London, decamps to the most beautiful countryside in Scotland and decides to turn an old mill into a bookstore. I’m asked to open it, and witness Kevin, the owner, flinging himself on the waterwheel to get started. I expect it to be a magnificent failure, but it’s been a magnificent success. Water Scott is no longer the only reason for book-lovers to go to Scotland.” (as told to) Bob Eckstein, author-illustrator
. Richard Booth’s Bookshop
Hay-on-Wye, Wales
1961 to present
ANECDOTE
Richard Booth recruited Hay’s strongest men and went to America’s closing libraries and shipped back freight containers of books on his way to becoming the world’s largest secondhand book dealer. In 1977 Richard Booth proclaimed himself King and Hay an independent kingdom. As King Richard Coeur de Livre, he named his horse as the prime minister. Richard Booth was awarded an MBE in 2004. In 2009 he was “beheaded” by the residents of Hay in good fun. The “revolting peasants” used a stuffed body double.
Throughout Hay-on-Wye there are honesty boxes to leave payment for books available on the al fresco bookcases. — Bob Eckstein, author-illustrator
.
Tweet