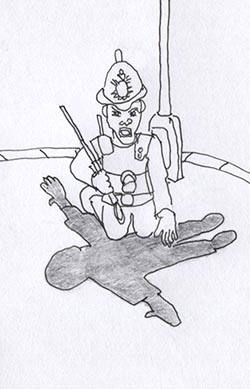 The Police with their sirens and electronic hooters etc.
Believe that they are in a fairground.
They are on some kind of ride.’
The Mister

Smith, a man of no particular qualities is walking home late one night having spent the evening visiting P. B. Rivers, a pitiless existentialist who gives no quarter to Smith’s blundering attempts at speech, and even denies any meaning to the word ‘the’.

Smith has been slowly absorbing P. B. Rivers’ viewpoint; even trying it out himself from time to time.
‘But you must adjust your stance depending on the situation, otherwise the application may be misguided and calamity occur’, he is sternly told.

This last is well above Smith’s muddled head as he soon finds out while making his way home down this dark tree-lined suburban street. Stepping from one pool of lamplight to another he watches his shadow shrink and elongate as he makes his solitary way along the deserted pavement.

He stops and stretches his legs wide apart and sees his shadow mimic this action. Then he tries to walk with his legs apart and his shadow does the same. He is most intrigued by this and executes a few light dance steps and is spinning around to view the shadow from behind when with a smooth swish a police car draws up at the curb beside him.

A window is lowered and the harsh voice of authority speaks.
‘What’s all this then?’ it demands.

‘What all of it?’ he asks, indicating the surrounding world with a wide sweep of his arms. ‘You want me to tell you what all this is, but where can I start?’ The police stares stonily back at him and encouraged by this attention Smith he goes on.

‘Maybe I should start with myself, if there is such a thing. Right, I’m standing here and you…’ The police has now got out of the car, ‘…are standing there’, he finishes.

’Are you trying to be funny?’

The police think Smith is trying to be funny, which as far as he is concerned is not the case at all. He adopts an offended tone.

‘As a matter of fact I don’t find this situation at all funny,’ he says. ‘In fact I’d like it to end as soon as possible if you don’t mind.’

‘I think you’re a bit of a clever dick,’ says the police.

‘Me, clever?’ says Smith. ‘Whatever makes you think that? The trouble I’m having keeping up my end of this conversation would, I think, belie that, and anyway I was never clever at school, in fact I…’

‘Knock it off?’ says Smith, and carried away by his own sparkling eloquence now recklessly adopts a pompous and supercilious tone.

‘Do you mean cease forthwith?’

‘Get it the car! Get in the car!’ snarls the police.

Tweet
This entry was posted on 22 May, 2014 in homepage and tagged dave tomlin, nick victor. Bookmark the permalink.