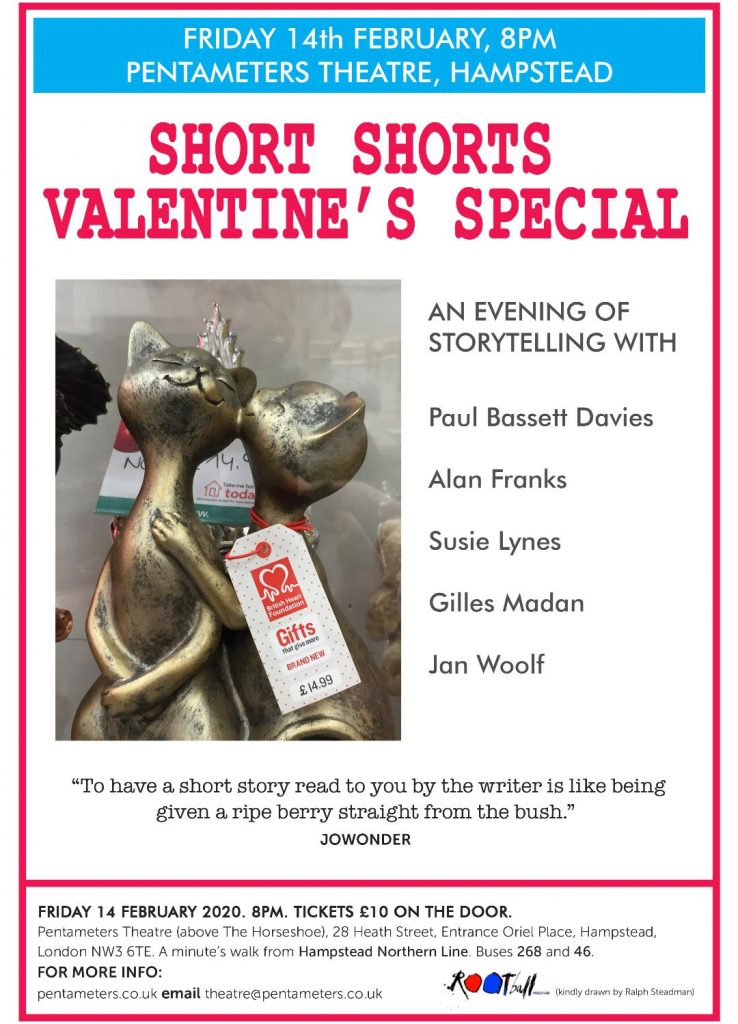 PROGRAMME IN ORDER OF APPEARANCE

Alan Franks –  The Thickness of the Door

Alan’s novels include Boychester’s Bugle in 1982, praised by Tom Sharpe as ‘brilliantly comic’. Going Over won the 2004 British Novella Award. The Notes of Dr Newgate was a Guardian Book of the Year in 2014. His latest book, The Thickness of the Door, is a set of three stories about the north and south of England. He is the author of many plays, including The Mother Tongue, and most recently, Looking at Lucian. Alan’s poems have won international prizes, including the inaugural Wigtown Competition, and the 2014 Wilfred Owen Memorial Prize. He was a feature writer for The Times, for 30 years, covering a wide range of topics and interviewing major figures in the arts and public life, and twice nominated for a British Press Award. His series of columns, Alan Franks’s Diary, has been published in book form. He has also written for The Guardian on walking, and has recently returned to acting, playing Dr. Feldmann in Duet For One and Joe Keller in All My Sons for a professional Richmond-based drama group. www.alanfranks.com,

Choosing the form to fit an idea, Jan is a playwright, reviewer and short story writer.  Her 4th play The Man With the Gold is being prepared for a run in 2020; the previous three, Sphinx, Porn Crackers and You Don’t Know What you Don’t Know, produced at the Hackney Empire and Royal Court. Her short story collection Fugues on a Funny Bone was published in 2010 and her second collection Stormlight is just out. She’s also working on a novella Hannibal and the Masked Girl, set in Tate Modern.  A varied working life as teacher, events producer, political activist, film classifier and editor has informed her work.  Like Dorothy Parker, Jan ‘hates writing, but loves having written.’ She is regularly published on line with International Times and Culture Matters and reviews theatre for the Morning Star.   [email protected]

Gilles is an aspiring young writer, currently studying Anthropology at University College London. He draws inspiration from his multicultural upbringing in Belgium; from his unconventional escapade in Spain; from his antisocial year in Texas; and from all the eccentric companions that he made along the way. A wise man once told him, “everyone is mad, we’re just mad in different ways”. If everything goes to plan, he will graduate this year and win the lottery so that he doesn’t have to worry about finding a job with an Anthropology degree. If, heaven forbid, things don’t go to plan… He is hoping to finish writing his first book this year, about a young man who decides to walk from Belgium to Spain.  [email protected]

Susie Lynes –  The Lies We Hide

Susie Lynes is a creative writing tutor, speaker, mentor and author. She taught creative writing for over ten years at Richmond Adult Community College and has taught at the British Council in Athens as well as mentoring for individual students. She will be appearing at Polari LGBTQ+ literary salon at the Royal Festival Hall in March and at Ampthill literary festival in April. She has published six novels with Bookouture, an imprint of Hachette: five psychological thrillers and her latest novel, a dark family drama called The Lies We Hide. Her books have all been kindle best sellers and, collectively, have sold almost quarter of a million copies. Her next book, a study of psychological deterioration on the part of a lonely menopausal woman wrapped in a psychological thriller, will be out in the spring.

Author and broadcaster Paul Bassett Davies has written, directed, and performed for stage, radio, TV and film. He began his career in multimedia theatre, before creating a series of one-man comedy shows at the Edinburgh Festival fringe.  He has worked with some of the biggest names in British comedy, and he co-wrote and performed in an award-winning radio sitcom with Jeremy Hardy. He also produced and co-wrote Do Go On with Griff Rhys Jones and Graeme Garden. His radio plays have starred actors Bill Nighy, Alison Steadman, David Hemmings, and Martin Clunes. Paul wrote the screenplay for the feature animation film The Magic Roundabout and has scripted and directed several short films.  Paul’s first novel Utter Folly (“Very funny” – Jack Dee) topped the Amazon Humorous Fiction chart, and was optioned for TV. His story The Spots is one of Six Scary Stories, Selected and Introducedby Stephen King, and was described by Stephen King as “Mordantly funny… Poe would have liked it.” His second novel, Dead Writers in Rehab (“Dark, dirty, warm, humane and funny” – Jeremy Hardy) was published in 2017. His new novel, Please do not Ask for Mercy as a Refusal Often Offends is published in May 2020 by Eye & Lightning Books. His debut collection is The Glade and Other Stories.  www.thewritertype.com Twitter: @thewritertype