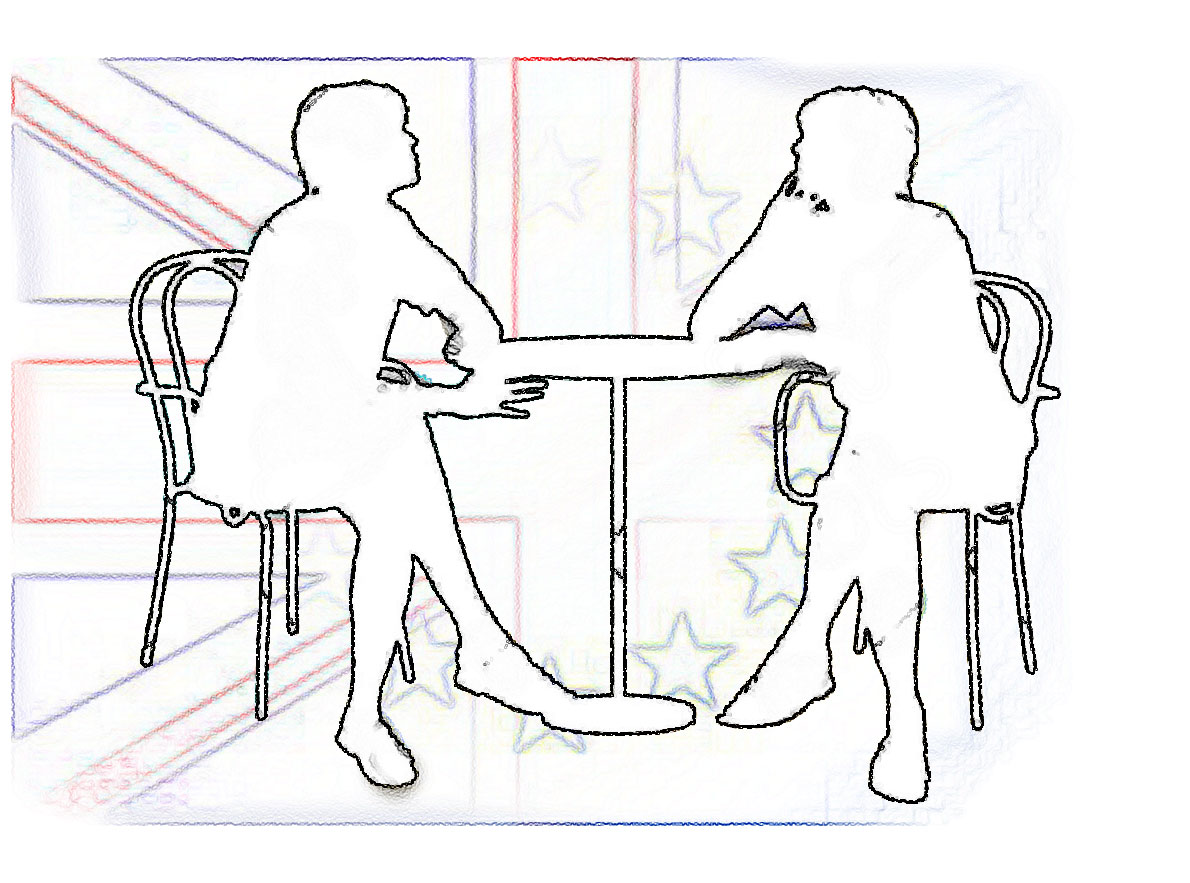 A glance in the mirror by the door.   Marjorie sees a strong face, handsome rather than pretty, a face ready for compassion – for active listening, eyes softening for the right kind of contact. Yes, it’s going well, my first clients in my first job with CAMHS.

She’d met the mother and daughter separately of course, as protocol required; and now for the pair of them.

She looks at the clock.

A knock at the door,

and Marjorie sits, smoothing her skirt with her hands.

A leggy girl stalks in, her mother just behind her.  Sitting in adjacent chairs, they cross their legs simultaneously, opposite Marjorie.

‘So,’ says Marjorie, I understand that you, Poppy…’

‘Voted remain, yeah,’ quacks Poppy, who folds her arms to disturb the embarrassing bodily symmetry with her mother.

‘OK,’ says Marjorie, then, turning to the whey faced mother, ‘and you, Faye…’

But Poppy interrupts, ‘Yeah, she’s Leave innit. Fucked with my future she has.’

Faye’s eyes melt, ready for tears, but manages,  ‘It’s the ultimate neo-liberal capitalist project, forcing people to leave their homes to take their chance in places where they can be exploited. Hard wired into the financialistation of course is austerity, and look what they did to…’

Well attached, Marjorie notes to herself.  The girl feels in a safe enough space to rock the boat this early in the session.   ‘So you both need some mutual accommodation’ she says gently, ‘some coming together of understanding during this time of national unsettlement.’  Marjorie leans forward into a space crackling with hostility, feeling she’d already said too much.

‘Look,’ says Faye, as much to Marjorie as her daughter, ‘you will appreciate this one day. I actually voted FOR your future.’

Red rag to a bull

Poppy for once is speechless, her jaw slack, eyes on stalks, you can almost hear the ring in her nose.  Faye closes her eyes and they sit silently for nearly a minute – a long time in a consulting room.  Marjorie hopes that they are each – owning the silence.

‘MY FUCKING FUTURE YOU STUPID…!’

‘Shut up’ snaps Faye, getting to her feet.

‘No, no, please don’t,’ says Marjorie, jumping to her feet, arms outstretched.  But Faye has already raised her hand for the slap that must surely follow.  But she sits, shaking, tears leaking.

‘Share with us both, in a calm way, how you are feeling.’

Poppy’s drawn breath is like a well-strung bow, as she releases.   ‘ EU fundin’ for my course the economy my boyfriend’s coffee start up AN’ he’s found a new bean – organic –  cheap – air fares racism queuin’ more at airports racism cost of holidays racism – roamin’ on my mobile…’

‘Me me me me me…’ spits Faye in a staccato of outrage.

‘…it’s not racism, Pet, they’re all white. So sit down,’ says Faye gently, recovering her composure.

‘Fear of the OTHER then,’ snarls Poppy, sitting down, some early version of herself obeying the parental command.

‘Where did you read that then Pops?’

‘Metro have an agenda darling.’

Marjorie, her eyeballs flicking from mother to daughter leans forward again, but not in time to prevent,  ‘The old shouldn’t be allowed to vote,’ from an enraged Poppy.

‘I was brought up by the welfare state,’ replies Faye. There was no EU then.  There’d just been a war.’

‘  ‘Zackly.’  Poppy, believing the winning point scored, punches the air, glowering at her mother.  ‘I’m European.  An’ now because of Brexit we’ll go to war with Russia again.’

‘No it’s not. And we were on the same side as Russia in the war – which was then called the Soviet Union.’

‘Smart arse Mother, you really are.’

‘Well, risks Marjorie, ‘you ARE from the continent of Europe and are in that sense European, whereas I’m…’

‘Well no, South African actually, but a British national so I call myself British.’

‘But why?’ asks Poppy, starting on another tack. You should be proud to be African. You denyin’ your roots or summink’?’

Faye, glad of the breather sits back to watch, and to listen to this new and complicated exchange, wondering whether such a newly qualified shrink was a good idea. But she didn’t want to be racist and choose the white one.

‘What did you vote?’ asks Poppy.

‘I did not vote,’ says Marjorie.

Why not?  thinks Faye, who had always found abstention to be a vote in default – a cop-out – a sop to enemies.

‘Why not?’ says Poppy. ‘You’ve left it to people like her,’ she says, thumbing at her mother.

‘We’re not here to talk about my vote or feelings around the referendum,’ says Marjorie.  She’d already lost a couple of Remainder friends and didn’t want her neutrality in the consulting room compromised.  Besides, she knew what racism really was – and meant.  But the softly ticking clock, the tissues nesting in the box, the aroma of fresh flowers picked that morning from her garden, bring her back from memories of her old shantytown.

It’s Faye who speaks first.  ‘At one time a king would have made such a decision, but now it’s the demos,’ she said, wishing she’d sounded a little less smug.

‘Or queen’ corrects Faye, happy to concede this, her eye lids fluttering like moths as she basks in the warmth of the word Mum.’

‘The people darling. Most of them,’ says Faye gently.

‘Yuh mean those fat white Neanderthals up north who eat crisps all day.’

Marjorie, becoming uncomfortable in her neutral space, leans forward again, ‘Describe them Poppy – how you FEEL about them. Who are THEY?’  A lost tribe?  thinks Marjorie –  the other?

Her mother closes her eyes thinking of her ‘thick as shit parents and grandparents struggling through the 1950s.

‘Anything else Poppy?’  Asks Marjorie calmly.

‘Of course you are.’

‘I don’t mean that you’re one, just because you’re black.’

‘Do you feel British then Marjorie?’ asks Poppy, her voice a little lighter.

Both women sit back, Faye for another breather as her daughter ties herself in knots, the other wondering how and IF to answer – whether it might be a diversion.

Marjorie goes for the diversion. ‘I do now Poppy. I feel this country is a mother that sheltered me from a terrible situation in the country I was born.  My family came here as political refugees.’

Faye’s turn.  ‘Yes, ironic, given it was the British Imperialism that made the mess in the first place.’

Poppy’s sigh set the tissues in the box a-flutter. ‘There you go again Mum, know it all, big poncy politics.’ Then, turning to Marjorie, ‘she gets it all off leaflets at meetings you know.’

‘Which you never come to sweetheart because you’re out clubbing, come, you might learn something.  Especially at the Lexit ones.’

Amounts to the same, thinks Marjorie smiling softly to her-self, thinking of the ANC comrades who similarly reframed things.

‘So call it Lexit an’ that makes it all right then? Said Poppy sarcastically.

‘Yes, it does sweetheart. It’s a different analysis.’

‘It will be seen as a progressive thing,’ said Faye, ‘at least…’

‘Mother. Don’t you DARE say We’ve got our country back.’

The word hangs in the air as Marjorie remembers holding her mother’s hand in the queue to vote in the first South African general election.  Voting for Mandela.  Having got their country back, would Madiba have allowed it to be run by a Pan-African bankers’ club? Would he ever have talked about the economy as more important than society?  Would he…?   But that was then, and Africa. This is now, and Europe and Poppy and Faye. And she knows that a second session will reveal the real reason they are here.

View all posts by Jan →
This entry was posted on 15 December, 2016 in homepage. Bookmark the permalink.