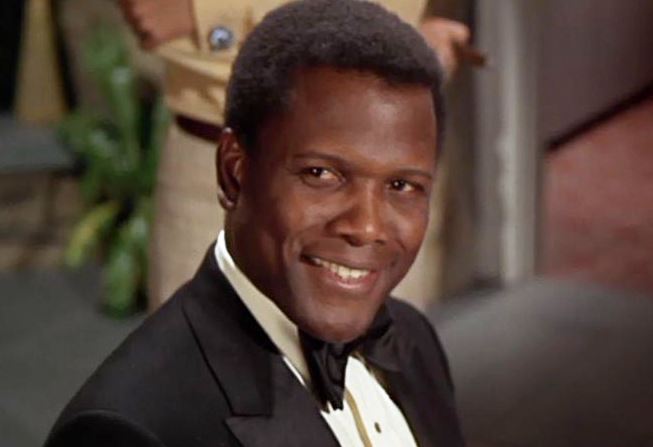 Aged 94, a powerful totem topples; actor, director, activist,
And exemplar of the Black is beautiful creed in and out;
The great Sidney Poitier dies, taking that elegant name
Across borders that we are yet to understand, while his charting
Of the terrain we should know saw truth shout.
As a Civil Rights crusader, his art proved his first point of protest.
From  No Way Out, each new movie signalled his own circumstance;
Bahamian bred, he was actually born in Miami, with his parents there
To sell reared tomatoes we heard the first roar of defiance,
And saw the former British Colony escaped by pure chance.
Then Cry the Beloved Country loudly wept  as the apartheid alarm
Pierced soft silence, and his own resolve hardened to use acting
Itself for the good; not for a career, but for the care of his people;
As it was for their representation  that he sought to rise and rouse
Neighbourhoods. And while The Blackboard Jungle birthed rock,
And aimed  to understand  the delinquent, the roll in the music
Saw no moss gained on his path; from Edge of the City’s harsh streets,
To being tied to Tony Curtis on traintracks;  each appearance
Was advance and emblem and concentration, too, on the task;
Chiefly  to effect change through Art, whether
In the Heat of the Night’s famously retaliatory slap,
Or at that infamous Dinner table; from where A Raisin in the Sun
Could be savoured, to A Patch of Blue and the first interracial
Pre-Kirk kiss  onscreen, Poitier was that celluloid kisser caught
As he reflected back misted mirrors to cast a burning light
On his era, and like his Mr Tibbs, seek distinctions
Between what Social Injustice is and then means.
If he had done nothing else than these films then we should
Mourn and remember this hero, who made his stance seismic
As he historically rewrote the book. Even Robeson and Belafonte
Had songs with which to enrich their presence.
Poitier had only acting’s traditions to try to denounce
With one look. But he was there with the greats who influenced
Modern culture; activists in art and advances in perspective,
Pain, power, and Politics. From Civil rights to social wrongs,
The list’s endless, as we mourn Dr Martin Luther King,
Rodney also, George Floyd, Trayvon Martin, and all those
Who suffered at the hands of the KKK’s gruesome kicks.
As those and other tragic victims were lost in his time,
Poitier’s position proved vanguard, along with the Artists
Who exemplified the profound. From Miles Davis,
John Coltrane, Otis Redding, Sammy and Ossie Davis,
Charlie Parker,  Billie Holliday, Little Richard, Chuck Berry,
Nina Simone, and James Brown, to Mingus and Monk,
Nat King Cole, Louis Armstrong, BB King, Robert Johnson,
Each of these shared the crown. Cry the Beloved Country, indeed,
For it may it not be the one you now live in.
Poitier was an actor who exposed on film every challenge
And taught us all how to be, through his poise, his regard
And the energies unleashed on us,he was human nature
As nation as belief released territory. When trends turned
He changed, using comedy as his vehicle; last gifts
To the public after the former force of intent.
Politics saw him steer a singular ship for the sailing,
As Bahamian Ambassador to Japan towards the circles
Of diplomacy centred around UNESCO’s need to invent
A more balanced world. Poitier influenced  and then equalled.
He paved a clear way for Pryor,  just as he did for Denzel.
For Morgan Freeman, Chadwick Boseman and Samuel Jackson,
To today’s equivalents; each nation has theirs who compel.
But Poitier was the first to claim mass attention. I can’t contain
In one poem every person to prize.  All I dare do is point
Towards another star lost to darkness; as we focus on
These bright fires who time can never douse, only rise.
David Erdos January 7th 2022
https://reelrundown.com/celebrities/Top-Ten-Sidney-Poitier-Films
Tweet

View all posts by David →
This entry was posted on 8 January, 2022 in homepage. Bookmark the permalink.