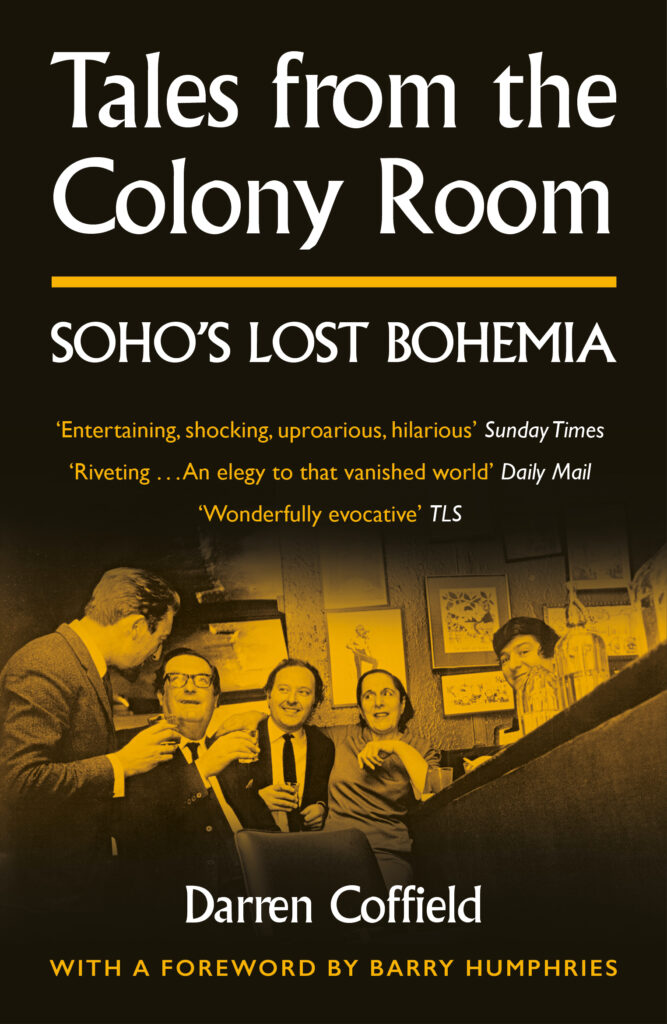 Here then is Soho as was, or how some of us still remember;

Full of aniseed and excitement and the seminal spill from low rooms,

Not to mention the high, from which the great and the good

Became gruesome, through drink and indulgence and the freedoms

We get to read and hear all the voices; Muriel Belcher herself, Francis Bacon,

And easels, for pigment and pose and floorboards – that this vital book

Now restores, as with a carpenter’s care Coffield captures those spectral

That have seduced everyone from Dick Whittingtons all the way upto

And beyond Derek Jarman, as like bacon rind, Francis Bacon and the scent

Of that club fries mind meat. Muriel Belcher’s Colony Club is a ghost

That haunts today’s Soho. For all its crazed glamour and its rancour, too

Now reminds – how so much of the colour has drained, and so this book

Becomes pallet, and with each recollection the brush has been dipped

Her early days make the Colony a colonial stab at new rules. It was a place

Where the famed met the barely formed and the fading, be it the lost

Spitting spunked tales out of school. Here is George Melly’s prime and pomp.

Here is Lionel Bart and Tom Baker, here is a riotous heaven for heathens

Above and below common ground.  The voices as chorus cascade; a wisened

Waterfall of invention, as John Minton sits wanking guardsman two at a time

For love’s sound – which is the orgasm one feels at that pumped  point of glory,

Which is the impression now gifted as we rollick our way through this read.

For what Coffield curates is an active gallery of abandon, mounted  in this

Small place made palace where Kings, Queens and Courtiers gathered

Everyone stomped by on their travels.  From the Vogue dumped Henrietta Moraies,

To the vituperative photographer John Deakin to Reggie and Ron, Daniel Craig.

Across sixty years, the club spread its local rule, to make countries where dreams

Was displayed. We no longer have rooms like this. The Colony Club was in fact

A collection. As you read each framed ego, each portrait in print splits its frame

Which is how the page becomes art, through rememberance and confession,

And the drink flows and connects like drug culture consuming itself to test fame.

Everyone had fame who drank here, if only perhaps for that evening.

All of the germs in the game along with the worms in Tequila.  As Gin an Tonic

Made sin supersonic,  the stain on these stars telescoped.  For the stories detailed

Rose and roused in that place from 1948 when it opened, right through to the 1990s

As the YBA and Britpop bubbles fizzed. From Coffied and co, to Will Self

And Sebastian Horsley, the Dandies in this Underworld stoked the embers

For sixty years of hell raising. With so much more growl than the Groucho,

Iit was a Ronnie Scott’s  without jazz, Unless you count the riffs spliffed

And sipped from the real, as these ecstatic  cavorters expounded,  in soft

Afternoons and late evenings  and the dawn spiked dreams madness has.

As an independent enterprise their deep value vouchsafes this volume.

This book is a brick in the wall that is no longer there, and so in reading,

With the provocateurs of their day who have not been replaced since or equalled.

Not in the sweet but in the all too cruel and the sour. As these gloried grotesques

Are not softened, in point of fact, they are raised to the same point on walls

Where gargoyles are placed to gaze at us. As here, with Muriel as Medusa,

Her tendrils are formed from her friends, who have now been  tested by time

And were at that time also. To take your place in that country, your personal

Bohemic stance could not end.  What Darren Coffield conveys is the world

We need, soaked in spirit. Taste it. Past sin and tonic still teaches just as

It soothes and stirs. Time suspends.

View all posts by David →
This entry was posted on 16 April, 2022 in homepage and tagged Darren Coffield, David Erdos. Bookmark the permalink.