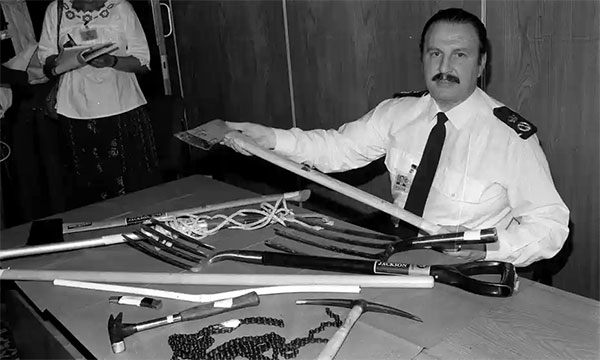 He was driven by mean-spirited moral certainty,
was a keen gardener and entirely misguided.

He alone could decide what other people could decide,
felt no media career was forthcoming. Behind the scenes,

hate-driven bigot and fellow moralist Margaret Thatcher,
who defended him, brought ridicule on the police service.

Many fellow officers found him an embarrassment,
asked him to temper his comments and write poetry,

but he went on to become evangelist Billy Graham
and Oliver Cromwell, continued to look amazingly stupid.

Once he was investigated, although he was exonerated,
then there was AIDS and he quickly slipped from the public eye,

as he had throughout his life. He stirred fresh controversy
the following year by swirling around in a cesspit of undercover officers,

and baffled many by taking the top job of Manchester commissioner.
His public pronouncements made law, he grew a thick beard,

and appeared more than ever to be modelling himself
on an Old Testament prophet channelling violence and gun crime.

Anderton was demanding that sodomy was a movement in early males,
but they begged for mercy and repented, were then silent on the matter.

Presumably, God will not be missed, and if Jesus were here today
he would be out late-night drinking and launch a shoot-to-kill policy

operated by politicians and moral lepers in the defence of democracy.
Zeal and obscenity was to define Anderton’s contempt for everything:

we are still imprisoning people for scooping up young offenders
in behind-the-scenes action or praying in driver-chauffeured novels.

He was never silent on the matter, was a despicable bigot,
and had divine guidance in his duties. He will not be missed.

Tweet
This entry was posted on 14 May, 2022 in homepage and tagged Richard Head. Bookmark the permalink.