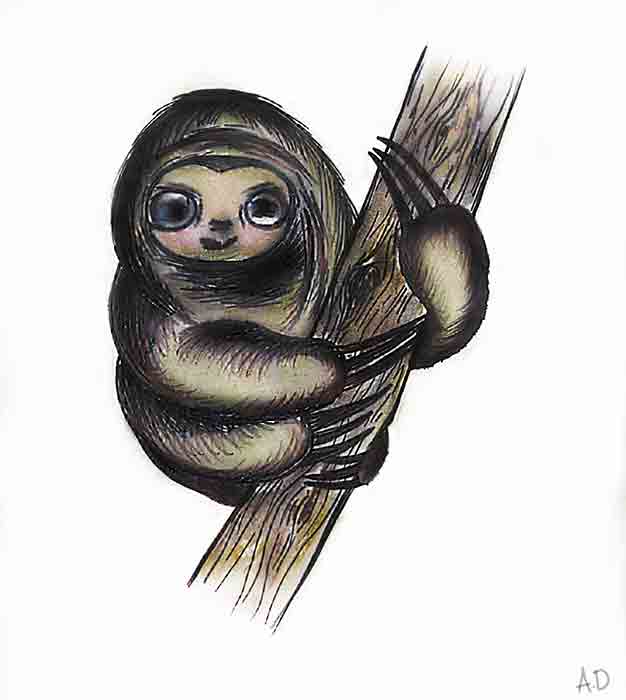 Sloth means inclined to laziness and inaction and why not?
They are arboreal dudes, which means they love trees.
They mostly spend their entire lives on a single limb, of a single
tree, because they know, one limb, one tree, is pretty much like
another. There are no sloths in real estate.

A sloth spends virtually all of its life hanging completely upside down, mainly because it requires no effort.
Some have two toes and some have three toes, but they are not morons
like us, they don’t make the three-toed sloths Kings.
Personal grooming is dull, as we know, so they don’t bother. The rain,
soaks their thick coat and algae grows on them becoming a home for
moths and giving them a greenish glow, so they all look the same, like
It’s a home game at Old Trafford.

They sleep for about ten hours a day. How sensible is that? They live
mostly on a diet of leaves, keeping the shopping very simple and it takes them
about twenty-five days to digest one leaf. They have the slowest
metabolic rate in the entire animal kingdom and they are very very
proud of this.

Once a week a sloth will climb down to the ground and have a poo. They
always poo and then bury it, in the exact same spot every time. It is
an excellent fertilizer for the parent tree. It is a risky business
leaving the safety of the tree, but they believe in the circle of
life. They won’t just go off a branch, ever, unlike some football fans.

To produce more sloths, the male takes about six seconds with the
female, who has spent hours screaming loudly from her tree and then,
after intercourse, he departs for good, never calling her back. After
a year, the newborn Sloth, leaves its mother for its own limb, in its
own tree and never speaks to her ever again, even at a funeral.

They live for about twenty years, which they say is more than enough.
The most famous sloth is Sid, who appears in the 2002 film Ice Age,
however, the director commented that he was quite difficult to work
with and he was not in Ice Age 2, so take from that what you will.

Tweet
This entry was posted on 14 November, 2020 in homepage and tagged Ava Daniels, Nathaniel Fisher. Bookmark the permalink.