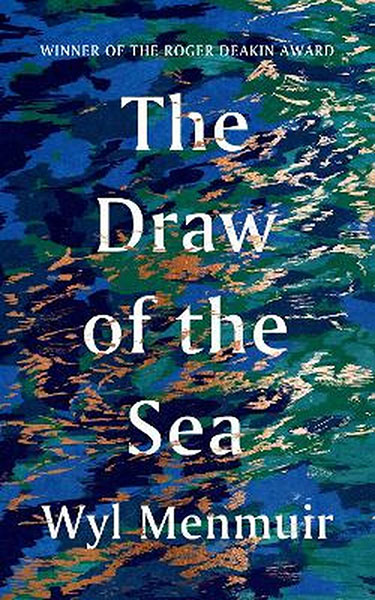 The Draw of the Sea, Wyl Menmuir (Aurum)

Few of us are immune to the seductive lure of the sea. Whether we live by it, alongside it, within striking distance, or just visit on holidays, we all seem to engage with it on some level. When my family lived in Devon we were on the beach for a walk at least once every weekend, more in the summer (not to mention on summer weekdays). For many years I relived my childhood summer holidays I spent in Devon: my parents, my sister and I driving down from London along the congested A303, to spend a fortnight rock climbing, swimming, sandcastle building, walking and boating. My distant uncle was the first person who ever took me sailing, on a Boys Brigade dinghy out of Torquay harbour; and although there weren’t plastic sit-on kayaks back then, there were wooden (and later fibreglass) twin-hull rafts you could paddle, and pedalos, that you could hire for an hour. In retrospect it was always sunny, in a super-8 film type of way: bleached-out, pale colours, a world that was slightly out of sync with itself, if a little blurred around the edges.

I live in Cornwall now, but I confess I’m not at the beach so often these days. Not only do I have a full-time job but there’s also the fact that on most of the spring and summer days when you want to go to the beach so does everybody else who lives here, along with the tourists that the local economy is so dependent upon. The roads and car parks can’t cope, and neither can I. It’s better to take my kayak down to the creek and paddle upstream or, until it got holed, sail our knackered old Gull dinghy if there was some wind. Truth be told, I feel too old for surfing or skateboarding these days, both of which were serious passions for a while.

Wyl Menmuir is also someone who moved to Cornwall, but unlike me he has engaged with the small worlds around him rather than moan about living too far from civilisation, as I tend to do. Menmuir is like I was in Devon in the late 1980s: enthusiastic, inquisitive, fascinated by the county’s past and local history, always seeking out details and stories. He is not a cynical man, never questions the importance of what he is looking at or what is being said, lives in the here-and-now and enjoys reporting it to the reader.

The Draw of the Sea is a quiet and contemplative book, a personal journey into what is mostly local, nearby and small scale. Menmuir learns to free dive, surf, row a gig and be a merman; visits artists’ studios and writers’ archives; collects shells, Lego blocks from discarded cargo containers, watches birds and other wildlife, explores rockpools; and runs away to sea. I say runs away (and so does the author) but what he means is that he buys a passage on a ship travelling to the Arctic. I’m jealous of his visit to the ice, but even here Menmuir is detached and calm, he doesn’t do hyperbole or excitement!

His quietness, self-acceptance and satisfaction is infectious however. Menmuir works at the micro level: he looks deep into pools, extracts amazing information and tales from the people he meets, and gets involved with everything and everyone. If at times this leaves me disengaged (I have no interest in visiting the Scilly Isles, and this book doesn’t persuade me otherwise; nor do I always buy into the mythologising of some of the locals he seems to revere), most of the time his quiet and gently meandering enthusiasm draws me in so that I share his wonder and learning. And even some of his jokes.

I like the moments of reflective autobiography here, too. This book looks inwards as much as outwards, sometimes pausing for a few pages to inform what’s happening now in Cornwall with events from the author’s past. These contemplative moments are echoed in contemporary reports and sightings, just as some of his writing is underpinned with an ecological awareness and concern. Menmuir doesn’t preach, but he is aware that humans are intertwined with the natural world and that we have changed and harmed it. His physical, intellectual and creative encounters with the coastlines and oceans of Cornwall, along with the people who work and play there, are both a consolation to and a reaffirmation of himself, a hymn to personal and familial relocation and immersion in community and place.

View all posts by Rupert →
This entry was posted on 18 June, 2022 in homepage and tagged Rupert Loydell, The Draw of the Sea, Wyl Menmuir. Bookmark the permalink.

One Response to Small Worlds