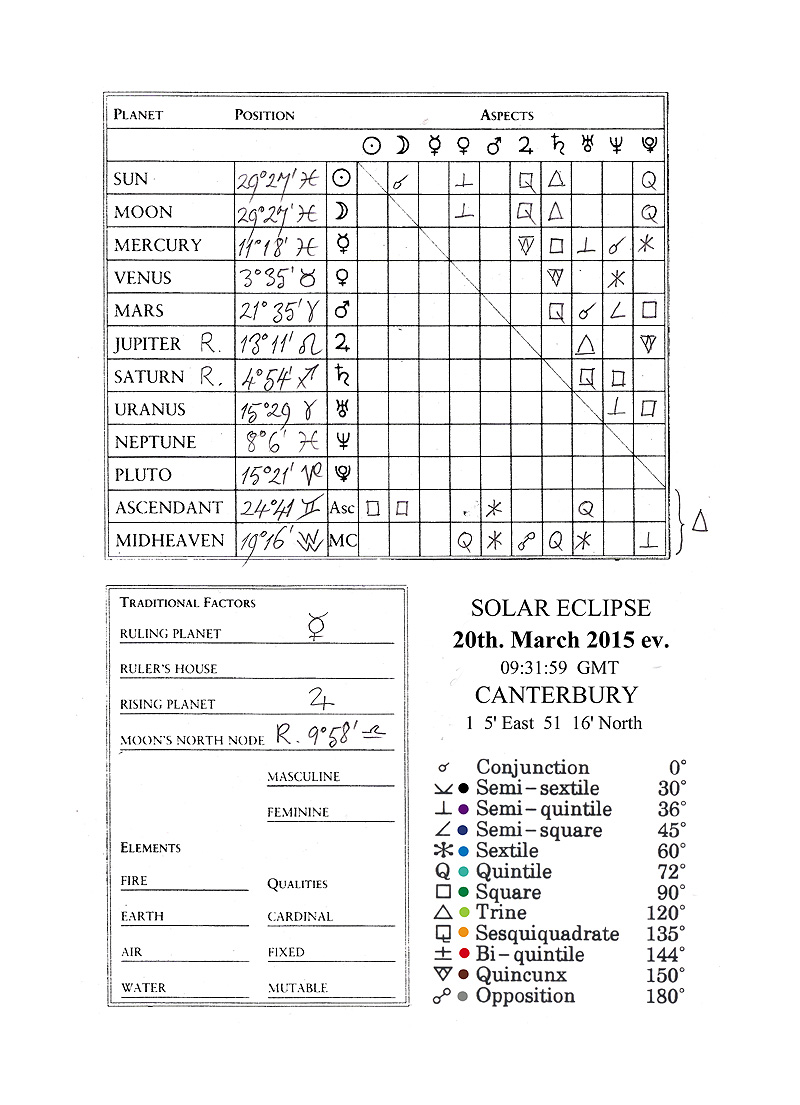 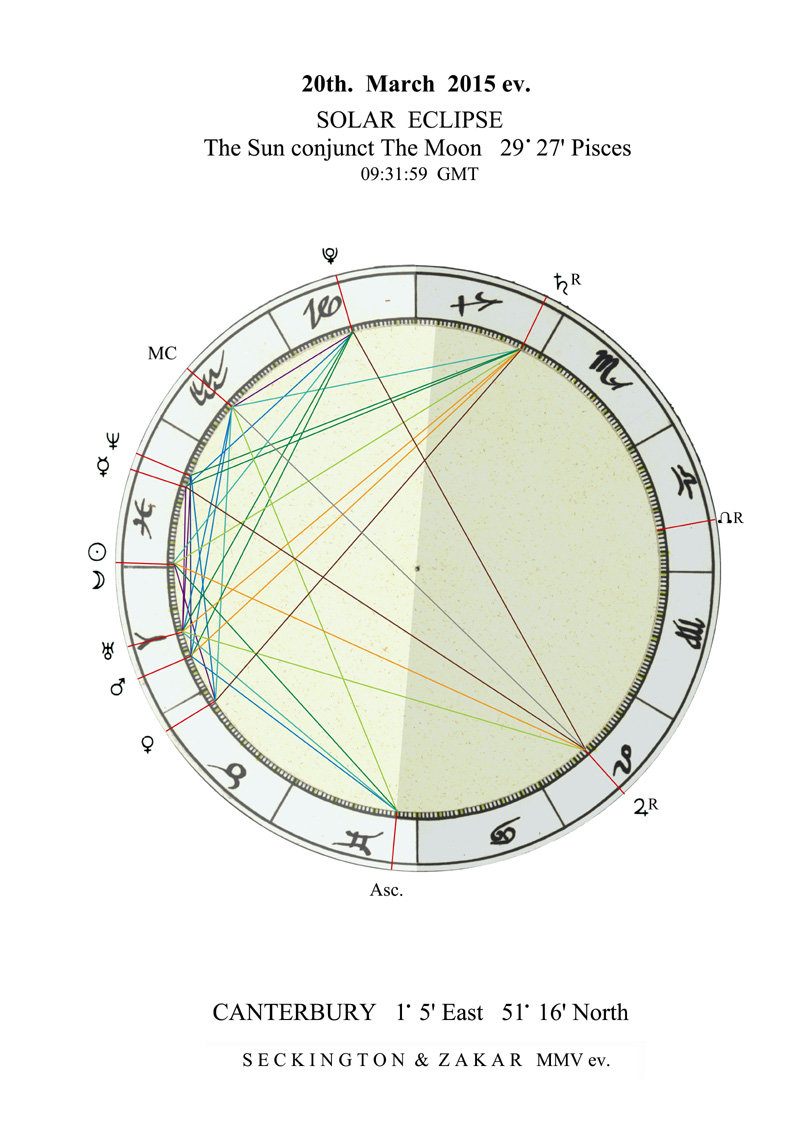 This is a phenomenon of approximately two hours duration with the conjunction applying from 08:40 GMT, exact at 09:31:59 and separating until 10:30.

There is an astrologically comprehensive system with all the celestial bodies forming multiple aspects and with the exception of the two retrograde (Saturn & Jupiter)  closely and evenly grouped around the central event and The Medium Coeli.

By its nature an eclipse (of The Sun by The Moon ) signifies the synchronisation of two systems: that which is tangible, or real with that which is hidden, perceived or illusory.

In personal terms the conscious and the unconscious, being and psyche, or in broader macrocosmic terms, the celestial and the chthonic, the mundane and the subtle or indeed the probable and the possible. Generally speaking the event represents an opportunity for the calibration of an operator’s Will with the cosmos as manifest and vice versa.

The multiplicity of angles of a four or eightfold geometry (semisquare, squares & sequiquadrate – fixing, holding & restraining) facilitates this operator’s work. The mechanism is in stasis and held as if in a vise on a clockmaker’s bench. Through his lens (The Moon, Yesod) he is at liberty to probe and adjust. Semiquintile and quintile aspects (probing & questioning) are his eyes, or rather the investigations that he pursues through them. The three quincunx (propositions or interventions) are his available tools. Venus and Jupiter, love and law are his hands, the impulse and the authority to exercise his privilege and to discharge his duty. The opposition of The Medium Coeli in Aquarius to Jupiter retrograde in Leo represents his own rational detachment from the labour and the focus of his will upon it. There is no resistance arising from within the system. The two adjacent conjunctions to the event: Mercury conjunct Neptune in Pisces, enlightenment through speculation, imagination applied to mysticism or ideology and Mars conjunct Uranus, strength to revolution, power to change, might to science – these reveal his mission to have his say in destiny.

In light of the recent developments in the long term progress of Saturn, its entry into Sagittarius after the purgatory of  Scorpio (23rd December 2014 ) and a protracted period of astrological lock down where the whole system seemed to be continually reordering itself it is tempting to view this eclipse as the long awaited epiphany of  a rejuvenated organism. Having freed itself from the terror of history, slain its monsters and buried its dead it is here presented for review and in some sense invites initiative. A call to magicians for focused and reflective action. In this it should be noted that notwithstanding the cool detachment of the analogous horologist this is not a soulless machine nor an homunculus awaiting animation. Its dynamic integrity is evident in the sextiles and trines, resonant and harmonic, it is vibrant, it breathes and the operator must proceed with the delicacy of a heart surgeon. ‘It’s The Sun for heaven’s sake – Good Luck everyone!’

One Response to SOLAR ECLIPSE