Songs From The Siren A response to Steve Hackett’s new album THE NIGHT SIREN
(on the Inside Out label, 2017)

As one of the most prolific writers, musicians, composers and album makers of the post psychedelic Prog Rock eras, a new album from Steve Hackett is always a chance to fuse and re-examine the forms. This new release from the Inside Out is somewhere around Hackett’s thirtieth official release, with the last few years in particular being his most productive and celebratory, co-inciding with his musical partnership with Roger King and personal one with his wife, Jo. Each project has revealed  a stunning display of revivified expression.

Only Peter Hammill, another mainstay from that earlier time of musical extravagance is quite as productive as Steve Hackett, and this already much hailed album, builds on 2015’s Wolflight and the recent Genesis Revisited touring project, which has seen Hackett master, and indeed mistress the world. 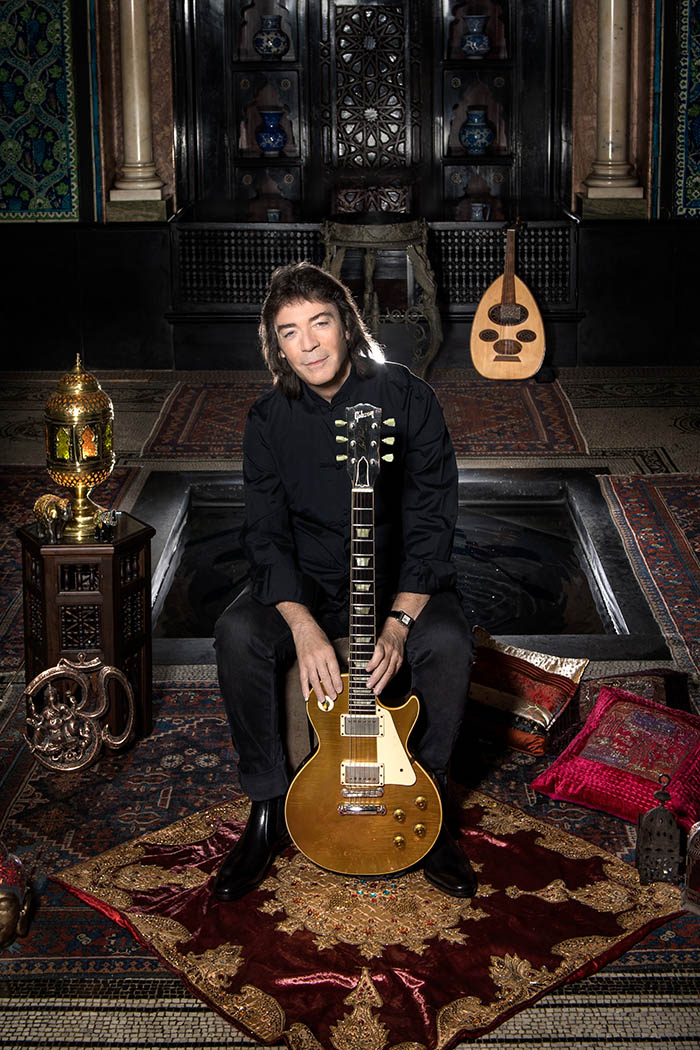 What follows is a track by track series of impressions, written while listening to the album for the first time.

Behind  the Smoke. From the plaintive classical picking the rumination begins. Hackett intones the need for  homecoming before the empirical chords soldier forth. Alternating between an almost celestial picking, the distance influences of the past are there in the lyrics and in the sense of vocal prophecy. Opening the album with such a strong sense of foreboding that is then pierced with his customary electric stylings is tremendously impressive. Hackett uses the lower register of his ever more appealing voice to summon elemental forces. The rippling acoustica and stirring power chords rattle the line of perception as we peer ever more deeply into and through clouds of smoke. That such power has been conjured between him and his guest ensemble of musicians in his front room in Teddington, while transporting us to some ancient, even mystical realm shows not only how effective home  recording facilities have become, but also how clearly the muse and message are translated by the hands and voices of this array of maestro musicians. As the darknesses clear, a refrain on Oud builds, almost defiant in the face of oppression, and the gathering onslaught of Roger King’s keyboards and Gary O Toole’s drums.

Steve Hackett  is one of the defining era of progressive music’s great survivors, particularly after 2016’s wave of deaths, which took many of his friends such as Keith Emerson, Greg Lake and John Wetton, and here, in his mid 60’s the still youthful Hackett, shows he still has all of his old power at his beck, call and command.

Martian Sea transports the depiction of ‘a barren landscape towards a psychedelic realm of colour’ through a rolling Byrds or Beatlesque rickenbaker type figure, with punches of pop synth. The song moves with an exuberance and choral sound bed that charms and struts before your ear. The dexterity of Hackett’s guitar playing is a constant in his work. He often risks flash but never dazzles unessesscarily. There is always  a point to his punches and the swooping synth chords in disrupting the delight of the journey soon remind us that this music has a special kind of narrative to it.

Hackett and co-writers, including the essentialism of his wife, Jo and keyboardist, Roger King infuse the music without prejudice mantra he espouses, by combining eastern and Indian instruments to forge a new frontier.

Fifty Miles from The South Pole, inspired by a journey Steve and Jo Hackett made was something he was writing when I interviewed him in January of 2016. A ‘land of extremes that opened his eyes,’ gave birth to a song that is initially delivered on a Shadows-esque figure before expanding into a sense of musical wonder. There is a softness and a beauty to the song as it captures the feelings the traveller makes and the emotions all of us may feel when experiencing such an impressive landscape. The Aurora Borealis pictured on the cover is captured musically thorough the angelic multi-tracked choralism of Amanda Lehman and in the context of a rock and world music record – if we are to impose any label on this at all – a sense of the novelistic is evident. Steve Hackett is as much a musical painter and photographer as he is a songwriter. His albums have always broadened the scope and range of what it is possible to include on a modern record. His humour, gentility and infrequent bursts of rancour simmer forth and can be heard in the tinge of his guitar tone and in the watering prettiness of his classical, nylon and acoustic work. His guitar sings and expresses all of the changes of dedication and love.

El Nino  lands in the ears after detailing the onset of chord cloud and a frenzy of drumming. These major key statements stain the earth below us, as the elemental forces that Hackett does battle with in this surging instrumental are invoked. One hears quotes of previous pieces expressed in a new way, as the guitar slashes swordlike through the air, cloud and sky. Whenever Hackett growls there is a clarity to it and his ingenious spiralling guitar lines affect and transport us once more.

Other Side of the Wall is ushered in on gentle acoustic patterns as the vocal intones once again. Each phrase searches with a kind of musical ache as the protagonist implores his muse to ‘say it now/how love’s meant to be..’ The refinement and sense of exploration then expand the song to move from the personally romantic to that of atmosphere and environment. Lovers becomes the places where they experience the emotion at first hand, and where every woman the man encounters shares the same face. As the mists of reclamation come to endanger the principality of the emotional state, the resident need bolsters forth.

Anything But Love has a charango style, Spanish strumming, fast and insistent as the rapid phrases coalesce with a percussion that speeds through the ear. The urgency strikes you as does the sense of place. One sees so many things, attends so many places when listening to Hackett these days. His recent work is to act as a kind of tour guide to the future, as much as his live work has curated the past and the heady days of his time in Genesis. He is constantly exploring what is possible to him within the frames and fresh canvases of contemporary rock, from the classical and orchestral through to the Hungarian band, Djabe, the subjects of a recent live release. Listening to this album you are  struck by easily music comes to Hackett, whose contemporaries either stay within accepted confines or cease work altogether. Near the end of the song, Hackett exhorts and sings as never before, concluding the celebration with impassioned aplomb.

Inca Terra, has a Chilean, traditional picking, with ‘raindrops glistening’ and a lullaby melody. Trance and affirmation are important areas for this composer/writer/musician and his cohorts and the song effortlessly contains the constant searching at the heart of the Hackett career. He and his various bands are continually on tour, redefining and locating new sources of sound, and there is in this song echoes of CSNY, and any number of slow weaving choirs from distant, almost unreachable lands.

In Another Life continues the seemless flow as we move between cultures, influences and new collections. The aural soup is a replenishing one and yet the intricate guitar line leads us into a story of conquest from traditional Scotland no less, with Troy Donockley’s Uillean Pipes lending sense to the once ancient air. Amanda Lehman’s backing voices soothes the tribulations of the protagonist as Hackett sings of ‘easy betrayals’ and the dangers of ‘the English hand.’ A flare of guitar evoke the feelings and moods on display and we are moved into a powerful series of musical and lyrical statements.  The spectral conclusion is a deeply affecting one, and we become aware that the album  is a series of chapters and incidents, packaged and fused by the guitar, acting as a kind of narrator and host.

In the Skeleton Gallery tells of childhood fears and extreme loneliness. The stately drum patter allow the soaring strings to emphasise the sentiments expressed. From ghosts to spaceships and the leaving ‘footprints on mars’ an eerie organ like phrase underpins the verses, telling of ‘tears on the moon’ before all changes again and Rob Townsend’s eerie saxophone weaves across the scented air, combining with his usual range of instruments played across his Hackettiana, including duda, flageolet, quena and bass clarinet. The scorch of the guitar guides us again as we are led into an instrumental workout. While some prog leads to indulgence, here these passages are simple statements of colour and celebration, intended to show scope and style.

West to East acts as a kind of musical and spiritual detente in line with Barenboim’s most stringest efforts, as Mira Awad and Kobi Farhi add Israeli and Palestinian elements to the backing vocals and Hackett seeks a joining of hearts ‘through the ashes and.. shadows of the grass..shining white’ from one border to the other. Music can accomplish in a moment what many of its listeners and those ignorant to it, cannot, so pieces like this are always important, crucial even, in the developing arena of the possible. One hears a faint echoing of Tony Bank’s Afterglow at one moment, which I suspect is Hackett quoting the transcendent call of that song in order to emphasis the importance of his own one. It lasts a matter of seconds, but in the shadow of one means of expression, we often find the blazing light of another, original statement.

The Gift, written by Leslie and Miriam Bennett and Benedict Fenner closes the album, chosen by Hackett to reveal the possibilities of the electric guitar. This has long been his preoccupation. Hackett, like his late fathe is an artist, but of his instrument. He never plays for the sake of playing, but merely to show what can be accomplished, from the ravaging beauty of the guitar solo in Firth of Fifth, the shattering mysticism of The Steppes, or the transcendent lines of Entangled, Blood on the Rooftops, through to the experimentalism of Please Don’t Touch.

This record like the many that proceed and the many I hope, still to come, show that Steve and Jo Hackett, along with Roger King and his ever developing band of associates, stand in the vanguard of those wishing to take this chosen form forward in order to reach new destinations. Progressive rock is not a style anymore. It is a mission. At a time of virtual darkness, Steve Hackett’s song is still sounding and his siren is part of the night.