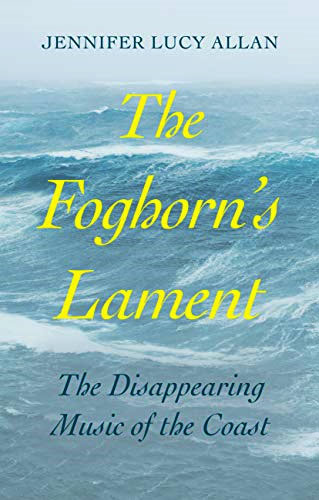 ‘ Lighthouses might house the key’
– Peter Hammill, ‘A Plague of Lighthouse Keepers’

Back in July 2020 I listened to a wonderful Radio 4 programme eulogising the foghorn, a sound fast disappearing from our world. GPS means that boats no longer have to rely on lights and sounds to plot their position; lighthouses are now automated and most foghorns decommissioned or replaced with quieter and more localised electronic warnings. Browsing in a local bookshop last week, I came across this volume and realised it was by the writer and presenter of that Radio 4 documentary last year. So I bought it.

Jennifer Lucy Allan is hooked on the sound of foghorns. Not the mechanics or construction of the huge trumpets, not the strange buildings used to house them – often near to lighthouses, but the sounds they make and how this fits into what she calls the ‘soundscape’ of the landscapes around them and affect those who live within hearing of them. She’s not alone: one of the things she writes about is all the composers and musicians who have used and incorporated those long desolate tones into their work.

She also offers a brief history of the foghorn, from the original concept through the building, testing and consideration of their sonic ability, to the mass installations that soon followed; and a century or so later their decommission and demolition. En route she discovers, retells and questions many stories and yarns, visits lighthouses and foghorn bunkers, meets enthusiasts, weirdos and collectors from around the world, undertakes pilgrimages to foghorns still in use – such as those on the Golden Gate Bridge in San Francisco – and persuades keepers and wardens to grant her access to lighthouses and foghorn buildings and sometimes to sound out the horns just for her.

It’s a ridiculous and totally engaging story, full of trivia, gossip, nautical history, intelligent reporting, personal anecdote, along with musical and social revelation. She tracks down historical letters of complaint about the noise, shares ghost stories, tries to untangle the foghorn’s actual creation story, but mostly listens and thinks about what she is hearing. Jennifer Lucy Allan is besotted. You will be too.

View all posts by Rupert →
This entry was posted on 9 October, 2021 in homepage and tagged Jennifer Lucy Allan, Rupert Loydell, The Foghorn's Lament. Bookmark the permalink.