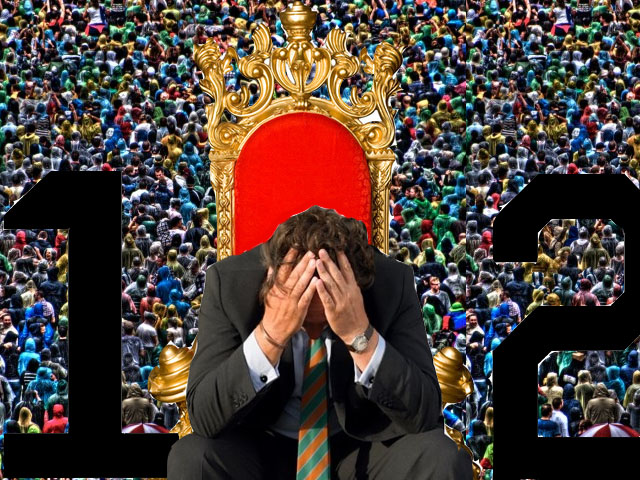 To begin at the beginning. 1 is the first number, although it does not actually qualify as a number until the arrival of 2. For if there were no other numbers 1 would be pointless, and if there were only one then there would be no point counting it anyway. However, 2 introduces the important dynamic of change and also the most primitive form of logic. That is, if it is not one then it must be the other. This simple logic has distinct advantages. Many people find the days of the week too numerous for comfort, how often do they wonder what day it is? If the name of yesterday is forgotten then what chance of today’s? Those with poor memories must find this a constant struggle, and those suffering from Alzheimers stand no chance at all. However, if there were only two days (say Thursday and Friday) then the whole thing would clarify. If it’s not Thursday then it must be Friday and vice versa; but even such a simple system would nevertheless be prey to error, one might still mistakenly think today is Friday whilst it is in fact Thursday. However, even for those with a poor memory a solution is available, since even if they are wrong they only have to wait one day and they are right again.

At first glance the number 3 is irrelevant. The number 2 represents more than 1 but is also the symbol of change, while the number 3 merely seems to represent more of more. However, 3 also bestows a valuable new dynamic into the bi-polar nature of 1 and 2: it endows 2 with the function of a fulcrum between 1 and 3, thus introducing the principle of balance.

Applying this model to the present English political system reveals an interesting syndrome. Although the system allows for multi-party presence in parliament, the minority parties can be disregarded since they can only gain any real power by joining either of the two main parties in coalition. Meanwhile the main battles generally takes place between the Left and the Right, both of whom seek to gain dominance over the other, and should either gain sufficient power would (if possible) eliminate the other entirely. Should the Left eliminate the Right then some kind of extreme socialist state would result, (a Stalinesque model perhaps or similar), while should the Right eliminate the Left a fascist dictatorship might then arise. (The Third Reich, Mussolini, Franco etc.). Either outcome is essentially the same, which is curious since both arise from quite different philosophies. But then any successful political philosophy eventually and inevitably succumbs to the laws of power, which laws it defines itself and tailors to its own interests. Karl Marx’s Das Kapital became a blueprint for others, even madder than himself, to put his philosophy into practice, while Adolf Hitler, (another political philosopher albeit of a particularly rabid kind), was able to implement the ideas in his book immediately.

The two main wings of the present English parliament are represented by 1 and 2, creating a pendulum effect, while the elimination of either would bring 1 back into sole dominance. Thus the element of change, the primal essence of existence itself and the most important dynamic of all since it is the evolutionary principle which allows for growth; would be lost. But as can be seen, the eternal competition for the booby prize between the Left and the Right depletes the energy available to either for the benefits of the electorate they purport to represent. Therefore the elements of 1 and 2 which govern parliament never manage to rise above the internecine squabbles which beset it, and the growth of any enlightened political philosophy is stunted to the point of atrophy.

At this point the number 3 and the principle of balance might (a little optimistically it is conceded) apply. If the two contrary political wings, rather than seeking dominance over the other, should refocus a little higher and aim for a balance between the two, a new and enlightened principle might change the whole face of politics. The Right would have the function of reigning in the perhaps excessive liberalism of the Left, where any sort of order might be resented, while the Left could introduce an element of flexibility into the hard and sharp edges of the Right. (The House of Lords being partisan, do not act as a true fulcrum.).

Balance – the Queen of principle and the resolving third element in any bi-polar system. Furthermore balance is not a fixed dynamic, since dealing with change (1 and 2) it must constantly seek for each new balance point which leads to a very subtle form of politics indeed. Such a solution, if accomplished, might then give birth to a kind of benign Anarchy, guided by reason and governed by the principle of Perfect Balance. Although where such evolved and illuminated governors might come from is anybody’s guess.

Governance: For those unacquainted with the word in a mechanical sense, a governor was a device applied to control the speed of an engine, (steam etc.). It consisted of two or three steel balls mounted on springs and attached to a revolving shaft. As the speed of the shaft increased, the balls became subject to centrifugal forces which caused them to swing outwards in widening circles until activating a lever. Thus bleeding steam from the boiler, lowering the pressure, and causing the mechanism to slow down. This lever could be finely adjusted until the engine ran steadily at a constant optimum speed.

Any political system (within reason) would work well providing those who administered it fulfilled their roles with integrity. This however, is an impossibility, for power is a cruel and ruthless master and its victims (our governors) must forego their integrity as the price of entering the higher echelons of the hierarchy. Power is only interested in power and the means, as we see daily, are never a moral issue. The lust for power is the least attractive in the spectrum of human conditions, for it bespeaks a total lack of conscience, which otherwise might lead to a shudder of revulsion at the very idea. Václav Havel had to be metaphorically dragged kicking and screaming to the post of Czech President, and then only conceded the point when he realised what chaos would ensue if he didn’t accept the role. But the likes of Václav do not grow on trees.

There is an ancient Chinese story of an old man (Lu) who lived near a river and had the reputation of being extremely wise. The Emperor, hearing of him sent a messenger inviting him to the city and the post of Prime Minister. Lu went down to the river and washed out his ears.

There appear to be two kinds of people in the world – those who seek and enjoy power even in the smallest of ways, and those who just want to keep their roses free of greenfly, maybe learn a Shakespeare sonnet or two and bring up their children in peace. Unfortunately we have to share the planet with the former and the New Jerusalem seems further away than ever, unless perchance evolution grants us a little more ingenuity in the handling of these maniacs. However, if humour deserted us where would we be? Answer: Exactly where we are now, except we wouldn’t be laughing. Don’t even think about it.

Lastly, a Sonnet to Power.

Four hundred years of politics we’ve seen
Enough to know how power corrupts the man
And makes him servile to a force unclean
Rise high himself to influence if he can.
The perks are good he’ll make it with élan
And have a shiny limo at the door
Yes, more of this becomes his only plan
Much more, and more, and more, and more and MORE!
Who can resist this force without a flaw
Not many Gandhis raise an ardent voice
Upon their consciences to subtly gnaw
A gang of villains is our paltry choice.
Real power will all intoxicate
These sots will never abdicate.

View all posts by David →
This entry was posted on 24 May, 2012 in homepage, Uncategorized and tagged 1s and 2s, dave tomlin, governence, government by numbers, left and right, nick victor, numerology, power lines, third way. Bookmark the permalink.