Spirit Led Activism – The True Power of the People 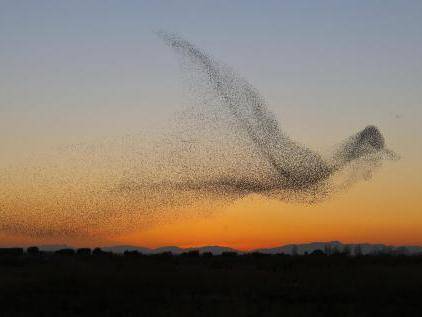 Murmuration of starlings, flying in unity

As the world is driven into a state of chaos by a combination of top down despotism and bottom up politically correct pacifism, seekers of ‘the path’ sit in the lotus position contemplating their navels or drifting into the ether of another world.

Seeking to participate in inner spiritual disciplines can quite easily be used as an excuse for doing nothing. Nothing about anything that actually matters. Nothing that would constitute making a stand against the destruction going on all around us. I say “can be quite easily used” because many aspirants who fill spiritual seminars, workshops, conferences and retreats all over the planet, have adopted the popular view that they shouldn’t be involved in confronting anything – except possibly, themselves.

The claim they make is that trying to prevent something bad from happening goes against ‘inner spiritual work.’ It is ‘confrontational’ and therefore encourages a negative vibration, when what is called for is “peace, love and tolerance”.

This is an evasion of the simple human responsibility (response-ability) to act when faced by stark cases of injustice and cruelty. It is not a spiritual reaction at all; it is rather the opposite, a simple act of cowardice which hides behind metaphysical teachings that say one must go ‘inward’ only, rather than outward, if one wants to do any good in the world. Such a convenient mantra for those who wish to avoid feeling or taking any responsibility for the shocking levels of cruelty and destruction which they themselves freely admit to witnessing, and indirectly supporting, on a daily level.

“No” such people say, “we will make a better world only by meditating and changing the vibrational level from carbon to crystalline. It is not for us to do battle with the forces of evil that control this world. If they succeed in their ambitions – and trash our planet in the process – it is because evil is still more prevalent than good, so we must keep meditating in order to become more spiritual and avoid being caught up in any form of conflict!”

Now the irony of this situation is really quite profound. Because what these spirit seekers are saying and doing – assuming that at least some are really ‘doing’ their spirit work and are not on a purely escapist trip – is not out and out wrong. But, without an equal and complementary commitment to cease supporting that which they know to be insupportable – plus a commitment to give active service to humanity and pressing planetary needs, it is essentially meaningless and should be recognized as a form of deception.

Only half of something whole – taken as if it was whole – is a dangerous delusion. A half truth, when taken to be whole truth, is indeed a grand deception and one particularly popular with the political class. Spiritual self improvement must always be coupled to tangible actions in support of humanity, otherwise it becomes regressive.

At the other end of the spectrum, there are those who join protest movements and direct action groups, who won’t hear of anything to do with ‘the spiritual’ getting in their way. People who are often brave and indeed courageous souls, and whose struggle to protect the Creator’s kingdom against wanton acts of destruction is considerably closer to the true essence of spirituality than is the cosseted world in which many of the so called spiritual aspirants reside.

Bravery is an important quality, but many of those heading out to block attempts to drive a new motorway through a pristine forest would be a hundred times more effective if they added the power of a conscious spiritual intent to their struggle.

Why, oh why, do people have to identify with one or other of these approaches? Why cannot we all settle for declaring ourselves ‘spiritual activists’ and get on with the job? This is the quality that really has the power to make/bring change for the better. Nothing can stand in the way of fully committed passionate souls, who combine their inner and outer powers to protect and promote all that has value and beauty on planet earth.

While it may sound heroic, this is in fact the natural state of expression for a human being who has not succumbed to society’s ubiquitous mind control techniques and/or fallen prey to pretentious propaganda. An unsullied human instinct will react to acts of obvious injustice by expressing a strong sense of righteous indignation which leads on to the desire to take action! This is because we are all linked-up, and on the collective subconscious plain, are one. When one see one’s fellow kind being kicked in the head by some crazed vagrant, one’s first (and best) instinct is to try to help the person in trouble.

‘To follow one’s heart’ is the first stepping stone on the road of truth. Actions that flow from here represent a genuine spiritual response. One based on compassion and empathy for and with the divine diversity of creation. Taking action to defend that creation is spiritual activism. Here is the response of someone whose inner and outer self are not alienated or in conflict with each other.
It is the dynamic of balance. A state in which the collective spirit of love that we share with fellow beings, is activated and acted upon. Yes, activated and acted upon. Both.

The spiritual activist is our natural state of pre mind controlled being. The being who has not been pacified by indoctrination to the ways of the status quo. Who has not sought to identify with the spirit alone – or with the warrior alone – but quite naturally finds that he/she is, by sheer dint of being human, is both these. How our world would rejoice should this breed of actor emerge at the forefront of the affairs of man!

We have had enough of compartmentalized divisions of oneness. Quite enough, thank you. ‘Nowhere’ is precisely where we will get so long as people continue to split themselves up into divisions of the whole and then believe they have found ‘the way’.

So, do meditation and spirit work by all means, but then immediately pour the fruits of it into taking action against injustice – and beyond that – towards the process of building a new model of humanity.

Real Action is not about congratulating one’s self for sending a preprepared text message to Greenpeace to stop oil drilling in the Arctic. Real Action is where one puts one’s self on the line – body, mind and spirit – to fight for a decent future for humanity in all the myriad ways in which this is so absolutely vital today.

At a time of mass deceit and corruption at the highest levels of society, worldwide, everyone who has a heart needs to have their hands clasp onto the rope of resistance. Everyone who has a soul, and some basic level of awareness, needs to go forth into the world and start setting in motion a great turning in the affairs of man. A turning which will reflect the potential, beauty and power of the human actor in full creative flow. Spirit and action in movement – conjoined as one.

So from here on in, say Godspeed to the emergence of the spiritual activist – and say goodbye to the world of half way houses that twist the truth into selfish self-concern for a cosseted life of make believe sainthood.

And while you’re at it, also say goodbye to all other such deviations from the truth that sap the life blood out of existence.

Julian Rose is an international activist who, in 1987 and 1998, led a campaign that saved unpasteurised milk from being banned in the UK; and a ‘Say No to GMO’ campaign in Poland which led to a national ban of GM seeds and plants in that country in 2006. Julian is currently campaigning to ‘Stop 5G’ WiFi. He is the author of two acclaimed titles: Changing Course for Life and In Defence of Life and is a long time exponent of yoga/meditation. See Julian’s web site for more information and to purchase his books www.julianrose.info

View all posts by Julian →
This entry was posted on 22 September, 2018 in homepage. Bookmark the permalink.