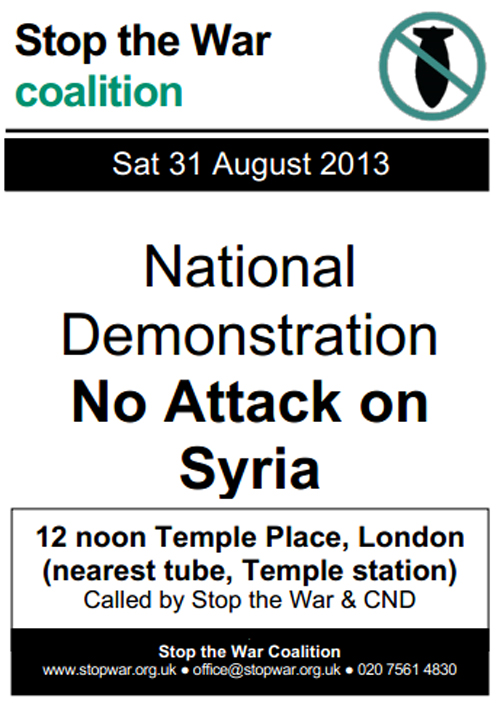 “But contemplate the future consequence of inaction and shudder: Syria mired in carnage between the brutality of Assad and various affiliates of al-Qaeda, a breeding ground of extremism infinitely more dangerous than Afghanistan in the 1990s”. Tony Blair 27 August 2013

As if sniffing-out the scent of blood, into the limelight once again steps none other than Tony Blair, ex UK Prime Minister and leader of the Iraq invasion less than a decade ago. The man who knew, beyond a shadow of doubt, that ‘weapons of mass destruction’ were stashed away in Saddam Hussein’s bathroom.

Well here he is once again, making another illuminating discovery – this time about the terrible terror tactics of tribal Syria, CIA backed al-Qaeda and President Assad and just how vital it is that the West once again takes direct action by bombing them all to hell. Nothing would Bloody Blair like more than the chance to join with Cowardly Cameron and have another shot at the total de-stabilization of the Middle East. He is (or was) after all.. Global’Peace Envoy’ for that region.. and that must surely mean he cares deeply about it’s future.

While oblique O’Bummer and Bully Boy Bidden ratchet up the anti – the United Nations’ investigators must be wondering if they are not going  to be the first to be taken out by “friendly fire”. What if they report back the bad news – “no satisfactory evidence found”?

Should the Masonic Cabal, who have been planning this little war for the past two hundred years, get wind of such an outcome – the UN will be publicly vilified beyond recognition; which won’t be difficult because it’s own house is not exactly what you would call ‘in order’. As for Ban Ki-moon – well – does he fill you with a feeling of great confidence about the steadfastness required not to be bought-out by Barack and the boys back in Washington?

Barack’s a nice man really – well isn’t he? You can see by his smile – and the fact that he was awarded the Nobel Peace Prize before he even started dismantling the American constitution and building on Bush’s global military ambitions.

What are the good people of this still existent World going to do about yet another blind march towards the barbaric invasion of yet another sovereign territory?

That remains the key question for us all..and there’s very little time left to answer it.

If there was ever an incentive required to rise up and stand firm against the purveyors of death – this must be it. I believe that the great majority of readers of this post are just  aching to stand-up and be counted! Well then, dear friends, follow the ache of your heart and choose any means you can summon to make your voice heard at this deeply critical moment.

Above all, do not allow yourself to fall back on proclaiming ‘the inevitability’ of war. That is simply the first step to total capitulation. It is not ‘realistic wisdom’ as some believe.. it simply means that you are still caught in the dark side’s web. You will later see how you were a net contributor to the tyrannical take-over of planet earth. Don’t let yourself fall into that trap. Get up, get out, and act! Then declare to your Creator that you will not allow the  fire of truth and justice that resides in you to be drowned-out by the rhetoric of death.