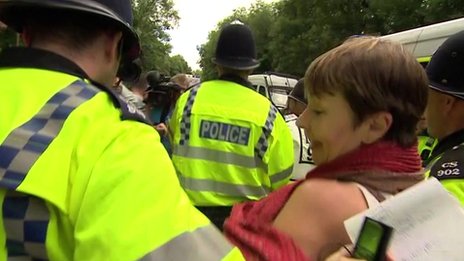 I hadn’t realised there were actually two camps.  Tents on the verges alongside the fracking site, decked in Indian hangings and rainbow banners.  Someone whittling a stick, someone knitting, someone strumming a guitar, children playing – settled in for the long haul, a village.

We backpackers off the train were being driven to the other camp, two days of direct action.  We were dipping in; others had already put up the hospitality, tranquillity and kids’ play tents, stocked the kitchen tents with enough vegan food to feed the thousand of us, dug the compost toilets and painted them, put up the notices telling us no drink, no drugs, no aggression and wash your hands.

And devised the big game, parts of it open, parts masterminded in secret.

Day one, Sunday, was to establish our presence.  A long, straggling procession from the camp to the Gate, the only way in to the great square of concrete, laid where the old woods had been brutally ripped open, guarded by high walls of wire, defended by a private army of Ghurkhas, the drilling rig quiet at its centre.

We, the two camps united, assembled in the road just beyond the Gate; ranks of yellow-jacketed police stopped us getting too close.  There were many young activists hardened from other battles, fathers with small children on their shoulders, plenty of grandparents, people in wheelchairs, a pensioner with not dead yet on his t-shirt, a poet in a policeman’s cap, a druid offering the land protection and healing, a guy wielding a pink tickle stick, heroic Caroline Lucas, our single Green MP –

Best of all, there were local residents come out to join us.  Balcombe has been fighting a David and Goliath battle against the huge power of Cuadrilla/Cuadzilla, the fracking company that holds the Government and all the local powers-that-be from the MP downwards in its pocket, and they’d already made a sympathetic alliance with the rainbow camp.

There were speeches, all rousing, then a feeling of uncertainty about what to do next, with police lines between us and the Gate.  And then the first game began with a whisper to join hands and make our way Indian file off the road into the woods around the site.  So together we made a ring round the rig and fools of the police, which wasn’t forgotten.

The next day, Monday, was action day.  We’d been given a bit of training the afternoon before, put into teams and each team privately handed its instructions.  Also asked how willing we were to be arrested.  My team, fair to moderate on the arrest side, were to keep the space in front of the Gate clear, so for an hour we played games like Grandmother’s Footsteps which got the police line laughing.  Suddenly there was a scrimmage behind us, a knot of people that parted to show a guy in a locked wheelchair with two others chained on either side.  Then another huddle protecting four guys with their arms locked together inside pipes, lying on the ground in an immoveable block – the Gate approach captured and held.

A pause, then things start to get nasty.  A line of chained bicycles has been set up across the road between the Gate and the main police encampment.  More police vans start arriving and squads massing beyond the bicycle barrier.  Suddenly a police charge, using the force of their bodies to break the line.  Everyone piles in on our side and after a struggle the police are pushed back.  Great chants of There are many many more of us than you! – Want to know what democracy looks like? This is what democracy looks like! – Power to the People!  Stand-off, pause, then a second massing, a second charge, a lot tougher this time, just fought off.  The chants change to Shame on you!  Then the Met appear – frightening.  The third charge.  They break through our line, hitting out.  Faces like masks, one or two fixed in arrogance, violence, hatred.  We’re beaten.  Because of the international mob of journalists with cameras and our own legal observers the police are having to behave, but there’s hidden unpleasantness going on.  One of them has stamped on a young woman’s foot.  She shows me the massive bruise and explains that they like doing that because no-one can see what they’re up to.  We find we’re kettled – we’re allowed to leave through the police lines but once out there’s no going back and no-one wants to leave their mates.  Stalemate.  Women in a circle singing softly.  Others sitting protecting the lock-ups and the guys’ heads on the ground.

Several of us go up to the police line and try to talk to them.  We know they have to do their jobs, we’re acting on their behalf as well as our own, for our and their children and future grandchildren, to take this last chance to turn away from our suicidal dependence on fossil fuels before climate change gets way out of control.  Some turn their faces away, some listen.  They may dislike doing this – it seems the Ghurkhas in their paramilitary jobs behind the Gate are not happy.  Maybe some of the police don’t much like what they’re having to do either.  But when the state backs the fossil fuel companies, the richest, most powerful on the planet, that combined power is implacable, crushing.  All we have is people power.  What chance have we got?

Early evening.  The equipment arrived to saw open the pipes and cut off the locks.  The seven who’d sat or lain for many hours were marched or carried away to the vans along with their closest supporters, including Caroline Lucas and her son.  The kettle was lifted.  I went back to the big camp, already thinning out, picked up my stuff and got a lift to the station, passing the rainbow camp by the Gate – children playing, people in groups talking, making music, cooking supper.  Settling back in for the long haul.