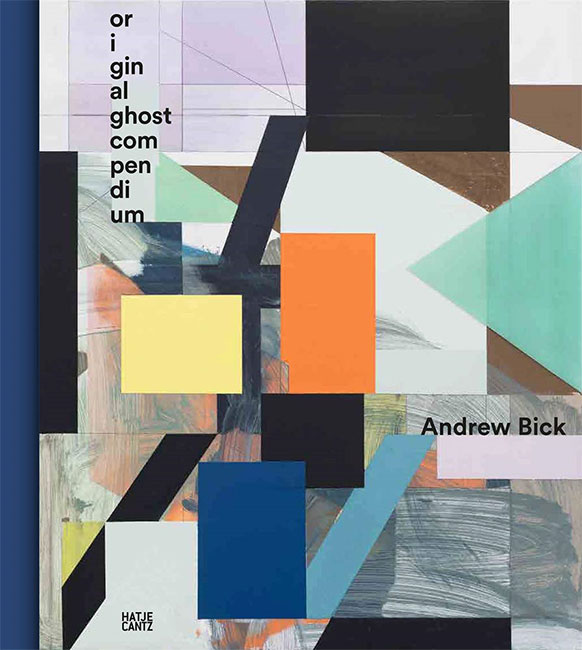 This is a long overdue and very welcome monograph about the London-based artist Andrew Bick, who is represented by Hales Gallery, London but is a major presence at Gallerie Von Bartha in Basel. This book is published on the back of an important solo exhibition at Museum Haus Konstruktiv in Zurich back in 2017, and also includes reproductions of and discussion about work exhibited in subsequent exhibitions at Von Bartha in 2018 and Hales in 2019.

Bick is both an artist and a curator, and his work has included artist’s books, sculpture, gallery and architectural installations, drawings, prints and paintings. These paintings often blur the lines between three-dimensional reliefs and more traditionally flat painted canvasses, with Bick often partially obscuring areas of his work with wax or Perspex layers, and interrupting his apparently formal grids with gesture, scribble and line.

Bick has always been preoccupied with texture, colour and form. His early work included careful black on white monoprints (sometimes in response to the minimal poetry of writers like Robert Lax) and concise wall sculptures constructed from found wood, with routed slots or stripes filled with clay and later wax. He acknowledged a [conceptual] debt to architectural structures, including the striped marble churches of Italy.

Over the years Bick’s work has become more formal, moving from being carefully constructed to constructivist, a systematic exploration of a grid and its reflections, stretches and distortions. Bick the curator has been instrumental in helping organise exhibitions of and writing about neglected Constructivist artists (particularly Gillian Wise and Marlow Moss), thus enabling a reassessment and repositioning of their work within recent art history. It has clearly been important on a personal and creative level, too, as Bick now underpins his work with theoretical and critical material drawn from and evidenced within Constructivism.

If this sounds dry, academic and dull, then rest assured it isn’t. Bick has always had a cheeky and witty approach to his work, not least in his use of titles such as ‘Concrete-Disco-Systems’ (a 2019 exhibition), ‘Nerd Theory’, ‘Nerd Geometry’ and ‘For Believing in Diagrams’ (painting titles from the 2000s), or indeed when playfully breaking up the title of this book into a column of text on the front cover, an act of subversion but also an homage to Robert Lax. In person Bick is cynical, affable and generous and although intellectual justification can sometimes seem like make-believe bullshit, the context and discussion offered here clearly shows how this artist’s work is situated and signposted, underpinning and informing rather than explaining. And of course, any sincere artist thinks about their work and tries to understand how and why it is made.

This book is similarly inclined toward down-to-earth, informed and highly readable writing, accompanied of course by a wealth of colour plates. Just as Bick sometimes talks about his work as a ‘conversation’ (with itself, with the artist, and with the viewer), this book also feels like a conversation or an informed discussion, not a lecture full of ‘artspeak’ or evasive flannel. If it devotes little time to Bick’s early work, it is generous and informative when it comes to current and more recent art. As well as a plethora of photographs of individual works there are installation shots from many exhibitions, including photos showing the shelving Bick has taken to using to exhibit prints and books, and the wall paintings he sometimes creates for specific gallery spaces. Other photos reveal the pages of his books, the artist’s resource material, and even a spider diagram from Bick’s note book when he was (successfully) applying for a Henry Moore Fellowship.

In the end both this review and the critical material in the book are nothing compared to the work itself, which both embraces and subverts its Constructivist underpinnings. The grids and layers Bick works with may be pre-conceived and formalised (as evidenced in more formal titles using words like variant, rotation and echo), but Bick has an amazing sense of colour, producing exuberant and vibrant paintings, even when working at the darker end of the spectrum. The interference and reinterpretations of his grids are immensely powerful and playful, the layering, obscuring and interruptions always surprising and innovative. These are powerful, intelligent, accomplished paintings, and this book offers a welcome discussion of and accompaniment to them.