Those Were the Days, My Friend 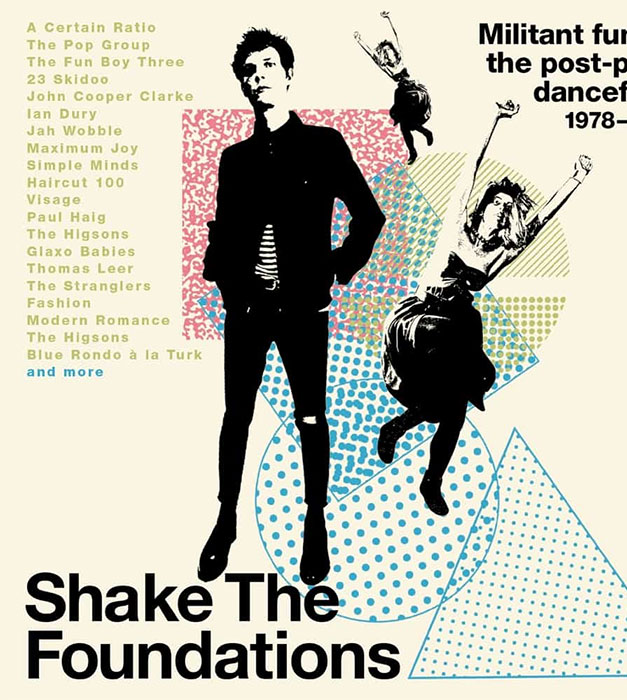 In retrospect it’s clear that there was more than punk in the air in the mid and late 70s. New York, perhaps, most clearly showed the musical divergence and synchronicity, as the city birthed disco, hiphop and punk from its broken and bankrupt tenements and slums. But something similar was happening in London too: pub rock, progrock, pop, dance, new wave, funk, jazz, experimental and improvised music had, of course, continued alongside and despite the headline-grabbing antics of the Sex Pistols and others, and by 1978 anything and everything was musically possible. Punk simply let some room into the mix, and encouraged anyone and everyone to make the kind of music they wanted to. And to do it now.

Cherry Red have been releasing some stonking themed compilations recently, and Shake The Foundations is no exception. It manages to scoop up the electropop of Visage, the dreadful pop of Blue Rondo A La Turk, the surreal jerky silliness of The Higsons, the political po-faced funk of The Pop Group and 23 Skidoo and lots more: there’s a Fun Boy Three track snuck in here as well as one by poet John Cooper Clarke.

It’s certainly toe-tapping and various, and although I could live without The Stranglers and Haircut 100 it’s good to have ‘Dream Games’, the rarer of two singles by Shock (probably because their other, more successful single was a Glitter Band cover!), to see a little bit of belated recognition for Furniture, and to be reminded just how good The Passage and Fashiøn were (however dodgy Fashiøn’s fashion sense was…).

And yes, there are lots of new names here as well as the usual suspects. I’ve never heard or heard of Perfect Zebras, Six Sed Red, Group Therapy, Normil Hawaiians or The Chicken Granny before, and if I have to say I won’t be rushing to find their back catalogue, it’s good to be reminded that different UK regions had their own local scenes and bands, and that there are still musical surprises available.

The press release focuses on the ‘absolute disregard for the rules’ around at the time, and I think is right to do so. Punk in itself wasn’t that interesting; too much of it was either heavy rock in safety pins or rich boys posturing as rebels. The real rebellion was the legacy of DIY music-making, the reclamation of synthesizers and guitars away from the idea of musical ability, and the appropriation of reggae, funk and rhythm into ‘alternative’ or ‘indie’ music, which up until now had pretty much been made by white, self-conscious, stationary males.

If 23 Skidoo’s martial arts & skateboard posturing and The Stranglers sub-biker lecherous sexism partially continued this theme, it was open to questioning by the presence of self-declared cripple, polio-victim Ian Dury, the geeky comedy songs of The Higsons (comedian Charlie Higson’s band), the new romantic fancy dress posing of Visage , the celebratory joyfulness of Maximum Joy, and the deep skanking bliss of Jah Wobble newly freed from the dour (but wonderful) Public Image Limited. Be they poseur, partygoer, toetapper, fashion victim, sociopath or political activist, suddenly it was ok to dance, however bad you were. (Count me in.) What was no longer permissible was being a wallflower. (Forget the perks.)

There was no centralised movement or grand scheme, no conspiracy or masterplan, it was simply time to party, even as Thatcher’s stranglehold on Britain grew and greedy yuppies and young Tories emerged to stamp down the counterculture. But po-faced politics and three-chord dischord be damned, life was too short to stay miserable and radical. This compilation is the music of late night gigs and parties, stretched cassettes in early Walkmans, the last gasp of breath before it all got serious again in the mid 1980s.

It didn’t, of course, shake the foundations, but these bands had a good try.  And if nostalgia isn’t what it used to be, this music had me tapping my feet and wishing I was back there then, skulking on the post-punk dancefloor in my leather jacket and eyeliner. Reasons to be cheerful? There are 49 of them here.

View all posts by Rupert →
This entry was posted on 20 February, 2021 in homepage and tagged Shake The Foundations: Militant Funk & The Post-Punk Dancefloor. Bookmark the permalink.