Posted on 10 September, 2015 by ClairePalmer With farming traditions that are already “organic”, embattled Syria can easily become an important organic food producer, based on climate, practices and location to Europe.

This past January President Bashar Assad issued Legislative Decree No. 12 for 2012 related to organic farming in Syria. The decree aims at laying the foundation for developing organic production and the marketing of organic products in Syria. This Legislative Decree followed a Syrian cabinet decision taken on November 22, 2011 to pass a bill on developing organic farming. This bill was prepared in cooperation with the Food and Agriculture Organization.

According to the Syrian Minister of Agriculture and Agrarian Reform, Riyad Hijab, the bill “comes as a result of the growing demand on organic products,” adding that it will help protect consumers and increase production. But what does this mean in light of a potential civil war for Syria?

According to the definition of the International Federation of Organic Agriculture Movements (IFOAM), an international umbrella organization for organic farming organizations established in 1972, “organic farming is a production system that sustains the health of soils, ecosystems and people. It relies on ecological processes, biodiversity and cycles adapted to local conditions, rather than the use of inputs with adverse effects. Organic agriculture combines tradition, innovation and science to benefit the shared environment and promote fair relationships and a good quality of life for all involved.”

Interest in organic products is increasing throughout the world, particularly in industrialized economies. As of 2008, organic farming extended over almost 30.4 million hectares, in 138 countries with the highest growth in the USA, Argentina and Canada. The worldwide market was quantified in 2006 at about 38.6 billion US dollars. The biggest market is Europe (52 percent), followed by North America (45%).

The aim of this article is to describe the development of the organic farming sector in Syria.

Syria has a good potential for organic farming because of its weather and because a significant percentage of its farmers attempt to preserve their ancestors’ traditions, which are already close to organic farming. Thus, chemical pesticides or other artificial farming methods are not used and the fields are irrigated with rain water.

Instead, Syrian farmers prefer natural insect traps, many of which are available locally. So, in order to qualify as an organic farm, the Syrian farmers will only have to introduce crop rotation in their fields, which would prevent depletion of soil nutrients and improve soil structure and fertility. Furthermore, there are many virgin fields in Syria that could be easily converted to organic fields and many products, like olive oil, for example, that don’t require pesticides.

Syrian farmers, especially in the southern regions, started to practice organic farming in the mid-1980s. They first learned about it from expatriate engineers and investors. One of the first organic farmers is Ahmad al-Masalmeh, who has been producing organic olives and grapes in his organic farm, which is located in the Dar’a Governorate, south of Damascus. He started his farm in 1985 after he found out that in organic farming there is no need for expensive chemical fertilizers and pesticides and it is enough to make organic insect traps and raise farm animals to use their compost as fertilizers, what makes it a healthy, cheap and profitable endeavor.

Challenges of organic farming for Syrians

Yet, practicing organic farming in Syria has turned out to be very costly. Two main challenges have been facing the organic farmers. First of all, there is no local market for organic products as few Syrians are aware of their importance. Secondly, there is no organic certification body in Syria. Therefore, the organic farmers who wish to apply for accreditation, need to turn to an international body and pay high registration fees as well as the full cost of an inspector’s trip. The price of the accreditation varies according to the size of the farm.

Few Syrian organic farmers can afford these high costs and, as a result, they do not apply for accreditation and sale their produce as regular, non organic food.

Despite these challenges, Syria is producing organic crops and products, chief among them is cotton. According to Industry Research House Organic Exchange, Syria was the world’s third-largest producer of organic cotton in 2009. According to Souhel Makhoul, director of the Horticulture Research Administration at the General Commission for Scientific Agricultural Research, organic cotton was produced on only 373 hectares just in 2005, but that has increased to around 28,000 hectares in 2010. A growing number of Syrian textile companies are also moving to make use of the organic cotton.

Syria also produces organic olive oil, laurel soap, medical herbs and grapes which are generally exported to the EU. However, it is hard to know the exact quantity of the organic exports since organic products have not been issued with a separate customs number and as such are simply recorded as agricultural exports.

In order to face all these challenges, the ever-increasing organic farming sector in Syria needs serious government support as well as the establishment of a local certifying body to make the accreditation costs lower.

The Syrian government stood up to the challenge and on September 4, 2005, Syria signed an agreement with the Food and Agriculture Organization for the development of organic farming in Syria from scientific and institutional points of view in order to increase its production while contributing to a better environment. This agreement was valued at 1 million USD, which was granted by the Italian government.

As a result of this agreement, the Institutional Development of Organic Agriculture in Syria (IODAS) was launched in 2006. This project was implemented by the Food and Agriculture Organization of the UN in partnership with the Syrian government, represented by the General Commission for Agricultural Scientific Research (GCSAR) of the Ministry of Agriculture and Agrarian Reform. Its aim was to prepare the grounds for the establishment of legal, institutional and scientific platforms for organic agriculture in Syria.

The project’s first part, which lasted until 2010, focused on training farmers all over the Syrian provinces on organic farming methods and interesting perspectives on the market for organic products and for this purpose, more than twenty training workshops were organized throughout the country. Yet, its main achievement was drafting a law to govern and promote organic farming in Syria, which was issued as Legislative Decree No. 12 for 2012 related to organic farming in Syria by President Bashar Assad on January 22, 2012.

The second step of the project, which started at the beginning of 2010 and is supposed to be completed in 2012, involves the creation of infrastructures to support the launch of new productions from both traditional crops, such as pistachios, olives, tomatoes and cotton, and new crops, such as cherries, citrus fruits and several vegetables.

Moreover, it aims to establish an organic farming department within the Syrian Ministry of Agriculture and Agrarian Reform to be responsible for the organic farming sector in Syria. Furthermore, it compiles market research on potential local, regional and international markets. One such market research, which was conducted in Damascus,Aleppo, Homs, and Lattakia, found that more Syrians were willing to pay more to eat organic food. It also continues to organize more workshops in order to train farmers on organic farming methods.

Another aim of this project is to consider the possibility of the establishment of a non-profit organic farmers association, which will unite organic farmers and will be able to better defend their interests and seek governmental, NGOs’ and international organizations’ support. This kind of association might also be able to attract more farmers and to lower the cost of production.

The question asked in this context is what has driven the Syrian government to encourage organic farming.

First of all, the Institutional Development of Organic Agriculture in Syria (IODAS) was launched following the Venice Meeting of the Ministers of Agriculture of all Mediterranean countries in 2003, which declared that organic farming is a priority and that all efforts should be spent for its development. Also, the EU looked for more potential markets, from which to import organic foods and products in relatively cheap prices. Syria, which is located close to Europe and where the force labor is cheap, answered all these criterion.

Secondly, the conventional agri-food system is becoming less sustainable from an ecological, economic and socio-ecological point of view. The Syrian government has been supporting some unsustainable agricultural conventional systems with subsidized seeds, fertilizers, pesticides, irrigation plants, fuel. The prices of raw commodities have been kept artificially high, and the prices at consumption are kept artificially low, but all these subsidies cannot last forever, because their financial weight is becoming unbearable. Still, the average agricultural incomes remain low and the rural exodus is strong.

In addition, conventional agriculture requires water and competition over the use of water has been growing everywhere in Syria. Moreover, trees and shrubs have been cut down in order to facilitate the mechanization, but it also increased wind and rain erosion, causing the loss of millions of tons of fertile topsoil every year.

Rotations and mixed farming have been abandoned, while overgrazing is menacing the pastures. Nitrates and fine chemicals, as well as heavy metals, antibiotics and animal wastes are flowing into the aquifers, whose waters are now dangerous for all forms of life.

To sum up, the deteriorating ecological conditions and the ever-increasing population pressure over dwindling natural resources, such as water and grazing land, together with the desire of the EU to create a new organic market from which it will be able to import organic products in relatively cheap prices, brought about the development of organic farming in Syria and the adoption of a more sustainable approach to agriculture. In that respect, the conversion from conventional agriculture to an organic one might be a key factor for improving both Syrian food security and the food trade balance. 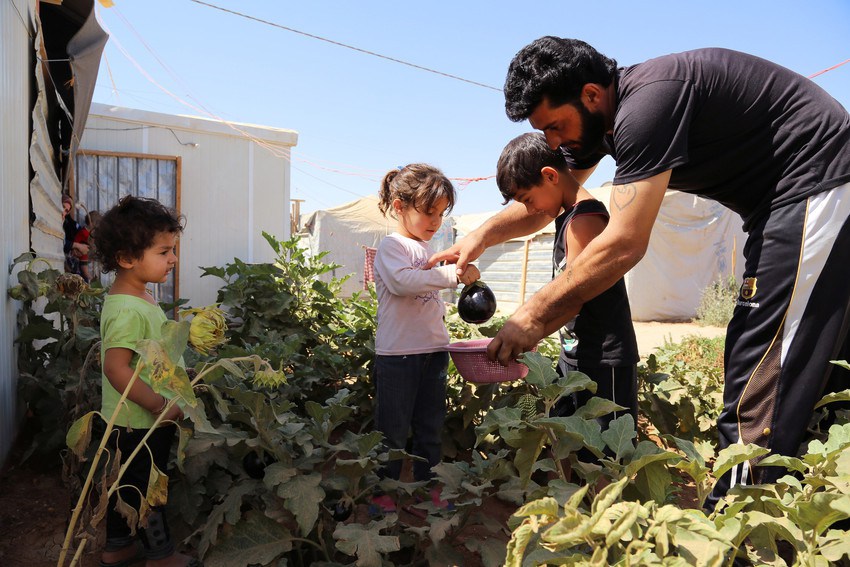 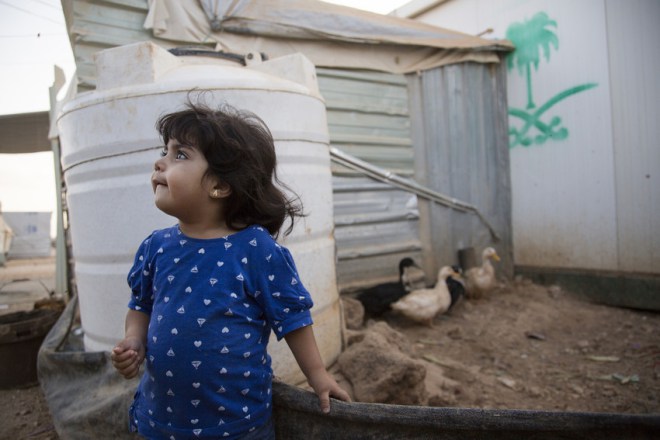 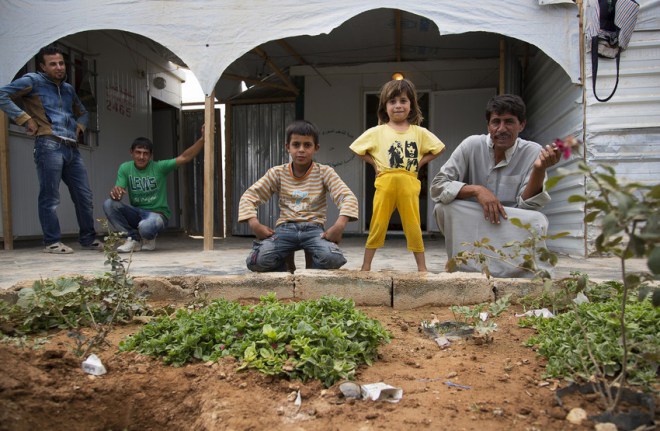