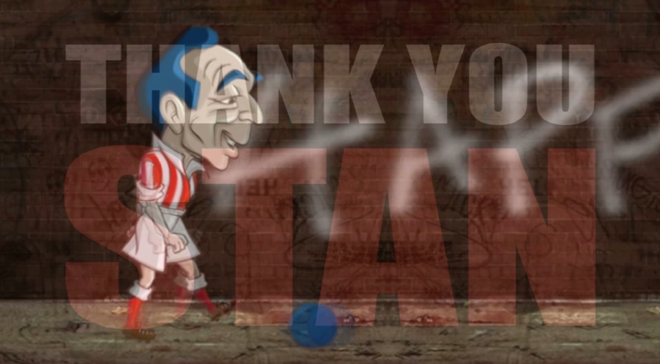 1st February 2015 is the centenary of the birth of the man who was most probably soccer’s greatest ever ambassador, Sir Stanley Matthews. The only other person who might lay claim to that title, Pele, said of him “Stan was the one who taught us how the game should be played”.

Stan was born in 1915 and finished his playing career in 1965 at the age of 50, a feat which will never be repeated. And even then, he felt that he had finished too early. Stan was constantly playing at the highest level and his last international appearance was at the age of 42. Stan was never cautioned once in 35 years despite being the object of some very vicious tackling, in eras when refereeing was considerably less stringent than today.  Stan became a ‘Sir’ in 1965, the only player to have been knighted while still playing.

Central to Stan’s incredible, continued, sporting longevity was his careful consideration of his diet and training methods. Stan was introduced to the idea of considering his diet by an osteopath called Arthur Milward, who recommended the idea of fasting which Stan would do every Monday.

But it was Stan’s own personal reading and study of diet which refined his understanding to the point that he could outlast and outpace his contemporaries and many much younger men. The technical side of nutrition is now a critical part of the modern game of football, but it was not then. Stan even made his own carrot juice. In later years he also became an exponent of reflexology.

Perhaps Stan’s greatest influence was in the way that he transferred to others and cultivated in them his love of what he called “The Beautiful Game”.

Stan was a boy from the Potteries whose first wage packet had been £1 a week and who, at the height of his powers, earned £20 per week and when he finally retired, was on £50 per week. Yet he was the world’s greatest ambassador for the game he loved.

Possibly, it was the fact that his status came not from riches but from reputation that allowed those who watched Stan, and those he taught, to identify with his enthusiasm and enjoy the game at whatever level they were able to play themselves.

Stan spent 25 summers in South Africa and played no small part in developing the enthusiasm that men and women there now have for the game and for the life-changing influence it has in their lives.

To the world, Stan was a man who could not resist sharing his love of a game that was his life and, in doing that, changed the lives of so many others. Archbishop Desmond Tutu credits Stan with having dented apartheid and giving black people hope in the face of a vicious regime. This is perhaps his greatest unsung achievement amongst so many incredible sporting feats.

What other legends of the game have said

I grew up in an era when he was a god to those of us who aspired to play the game.He was a true gentleman and we shall never see his like again”

“I remember going to St James’s Park to watch Blackpool playing Newcastle and Stanley Matthews was playing, I couldn’t believe he was just a man. He was the best player in the world. Then when I first came here and was playing against him it was a privilege.”

“I had the doubtful pleasure of playing against Stanley Matthews and the real pleasure of playing with him for the combined services. He would come to you with the ball at his dainty feet. He would take you on. You had seen it all before. You knew precisely what he would do and you knew precisely what he would do with you. He would pass you, usually on the outside, but as a novelty on the inside.

“If you went to tackle him it was merely saving time for him. He then simply beat you. If you didn’t he would tease you by coming straight up to you and showing you the ball. And that would be the last you would see of him in that move. If you were covered he would do the same with your cover man and his cover man and so ad infinitum. Then, in his own good time and not before, he would release the perfect pass.”

“You can’t tell good players like Matthews and Mortensen what to do.”

“How does he do it? Here are some of the secrets of Stanley Matthews as I have seen him: Perfect fitness and faithful attention not only to fitness but to playing gear. Superb balance. Complete confidence in his own ability. Tremendous pace over a distance of up to twenty-five yards, but especially over twelve yards, the distance that really matters in football. A beautiful body swerve. Mastery of the ball.

“He can ‘kill’ it stone dead from all angles and paces. Complete two-footedness. He doesn’t mind which foot he has to centre with. Ideal temperament and self-control. Like all players of this type, he has had to undergo some pretty stiff tackling and fouling, especially from Continental sides. But he never gets rattled, never retaliates (although his father was a professional boxer, and Stan might be expected to be useful with his hands!), never wastes time waving his arms at the referee or arguing with the official. In short, the ideal poker player – on the football field.”

“Many people have told me that Matthews is slow, but don’t be misled by old Shuffling Stan, as we call him. This Prince among wingers looks unconcerned about anything,but watch him when he is showing the ball to an opponent, as if he is counting the panels. Then watch that tremendous burst of speed that takes him clear of everyone.Other people accuse him of being a bad team man, the sort of player who holds up the forward line and allows the defence to get into position. What utter nonsense. Stanley Matthews is a perfectionist, and when he gets the ball he refuses to pass it just for the sake of passing it. He wants his colleagues to move into position, to get away from opponents into the right position for the pass that will bring a goal. If no one moves, Stan will hold the ball until everyone is in position. And no one can hold a ball like Stan. He has uncanny control, and looks quite happy when three or four men are around him.”

“For me this man probably had the greatest name of any player ever, certainly in Britain.I don’t think anyone since had a name so synonymous with football in England”

“I remember when he accepted an invitation from MPs to launch an event at the House of Commons I suggested to the Sergeant at Arms that they laid out the red carpet for him. I was told in no uncertain terms that was only done for Kings and Queens.’ But Stan was the king of football,’ I replied. When it came to it, no red carpet was needed. As we entered a crowded Westminster Hall, people just stopped and stared and instantly made way for him to walk down an invisible red carpet, asking him for his autograph as he went by.”

“The man who taught us the way football should be played”

“It is not just in England where his name is famous. All over the world he is regarded as a true football genius”

“He told me that he used to play for just twenty pounds a week. Today he would be worth all the money in the Bank of England“

1948: Football Writers’ Association Footballer of the Year (first ever winner)

1965: Knight Bachelor (the only player to have been knighted while still playing)

2010: Stoke Citizen of the Century

BAFTA-award winning director Tony White has created his own very special ‘Thank You’ to Stan (which you can watch on this page) in an original 4 minute, 2D animated film inspired by the book Stanley Matthews: The Black Man with a White Face by Geoff Francis.

The film was produced over a 2-year period at the Pacific Northwest based studio, DRAWASSIC. It has already been entered into more than 20 film festivals around the world, and will be screened in locations as far flung as Los Angeles and Mexico (for which a special Spanish version has been created).

The UK version of Tony’s tribute is voiced by Stoke-On-Trent North MP, Joan Walley, who is a Vice Chairman of the All Party Parliamentary Football Committee. Joan knew Stan well in his final years and shared a passion for football in the Potteries. Also featured in the film are the voices of Desmond Tutu and the shy maestro, Stan, himself. Music for the film was composed by James Bell of All Out Music.

Spirit of the Game – the movie

Tony is also the director of the full length animated feature film Spirit of the Game. Its story, based on the classic young adult’s novel Spirit of the Game by Geoff Francis, has at its heart the sporting philosophy of Sir Stanley Matthews, who is arguably the game’s greatest ever ambassador and the man of whom Pele said, “He taught us how the game should be played.”

Joan Walley said “I feel strongly that the values Stan embodied should be put on the map so that whole new generations can really reach out to what he stood for.”

Tony White’s reputation in the animation world has drawn an amazing range of talent to this project, including leading animation professionals (from Disney, Pixar and Dreamworks) plus UK voiceover artists including RSC actor Patrick Robinson and actress Carol Royle.

Tony says “Not only will this be an important film for football worldwide, it will become a landmark for the British animation industry. Animated films are timeless and enthusiastically received when well made. They cross borders, cultures and language divides. Spirit of the Game will take traditional 2D animated filmmaking to new areas of socially-relevant expression and creative storytelling. It will do so in a way that only the very best of award-winning, British live-action dramas can do – yet with the added dimension of mature hand-crafted animation that is far removed from the traditional ‘cartoon’ format.

Through this we hope that the wise and humble integrity that is defined by Stan’s life will speak to all people, young and old – in Britain, the USA and around the world.”

Stanley Matthews: The Black Man with a White Face by Geoff Francis

An authorised biography of Stanley Matthews, with the help of Stan’s daughter Jean for the 2010 World Cup.

Spirit of the Game by Geoff Francis

A semi-graphic young adults’ novel by Geoff Francis which has been written in a way that really engages young adults, and especially young men. Stan is at the core of the story.

The story unfolds against the background of football (which has enormous global influence and provides role models for countless young people) and, as well as being an engaging story, gently invites the readers to address any prejudices they might hold.