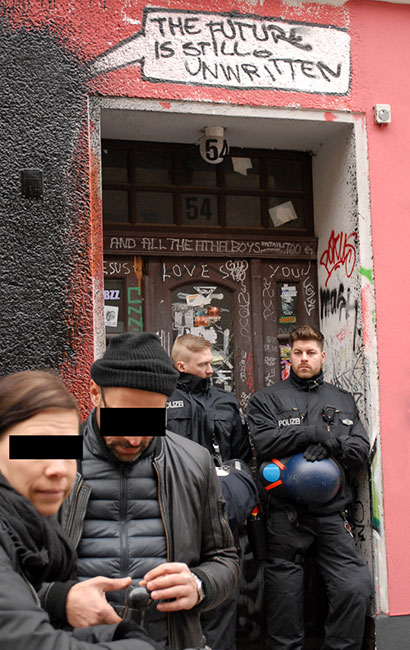 “Let us light the fuse on the dynamite of vengeance!”

I have no address, I have no health insurance. When you mess with a higher power, it is important not to loose your nerve.

This train is carrying five kinds of people. As I have not bought a ticket for the last two years, I am in the category of ‘no money but needs the means of transportation’, that is a person who is nervously looking for next category of people, the controllers.

I am occasionally scared by the third category of people, those who roam the subways of Berlin, announcing the tragedy of their situation with an open hand, looking for change. In my nervousness and from my lack of German, I associate this projection of misery as the announcement for tickets. The forth category of people are those who can and do pay for their ticket, they are those with employment and a daily routine and as such look insanely bored.

I have been illegally riding trains since I left London as it is now possible to board one without having to pass the ticket barriers. I feel myself slipping into the final category – that is ‘no money and does not give a fuck’. It is the absence of authority on the railway as a problematic element to my journey.

It is the absence of giving a fuck that puts me into another category while living in Germany – that of the bad immigrant. This is a person who does not assimilate into his host society, who does not pay for transportation or tax, who does not speak the language perfectly and who wears a German army jacket with a defaced German flag.

I am confronted by the apparatus of the 30 year old German state, which after the collapse of the Soviet Union has assimilated the power of bureaucratic oppression from the East with the wage slavery of the West. It is this power, as old as myself, that satisfies the world view of Germany as ‘efficient’. My train stops outside of an emergency dentist and with a medical student, I walk inside the sterilized corridors of pain.

When you mess with a higher power, it is important to not loose your nerve but as I look around this dentist’s waiting room, I am presented with the alternatives. My tooth has become infected at the nerve. No address, no insurance. I go into the clinic to take my shots, the drugs that will help with the surgery, the sweet release from the blood and tearing. I go back to the waiting room. I wait. The bacteria digs into tissue.

I am not a thief. My needs are survival, they are complex but betray a very human condition. I need shelter and a community around me that can mutually support itself. I am from another land but I am not a burden to society. I make friends and fall in love. I grow and learn the language but I am not a good immigrant. I am an anarchist. I am back on the train.

When you mess with a higher power, it is important to not loose your nerve but as I look around this underground train, I am presented with the alternatives.

The vibration of the train matches the collapse of my mind, the high pitch screeching of the doors accelerates my heart. What did I have to loose? The city shakes above me.

I know a group of thieves. They are part of a much bigger collective that dominate property in Berlin but what connects this band of thieves is the consequences of their greed to the local community and culture. It is their part in the social cleansing of entire neighbourhoods that marks the violence of gentrification. They are known as corporations, property development companies and co-working, co-living enterprises but the old term still remains accurate – robber barons.

I came across these criminals because local bars like the Meuterei in Kreuzberg and the Syndikat in Neukölln were being closed down by landlords Göran Nordic and William Pears. I saw youth centres like the Potse-Drugstore being harvested for bitcoin private communities like Rent24 and radical feminist centres such as the Leibig34 – up for eviction by the landlord of the far-right AFD party.

The Catholic Church successfully evicted a group of older squatters off Grossbeerenstrasse. This is a long process, the residents of Berlin tell me, on the streets outside of these alternative spaces.

Berlin has been carved up with a more brutal intensity since the fall of the Berlin Wall. The culture that existed that allowed me to survive in this city was crumbling under the weight of this theft. Those who were supporting me in my homelessness were being evicted themselves. This was the reason why I left London.

The power in these evictions was the threat and not the action. By threatening so many groups with eviction, the logical result was resistance being spread thin and those working to resist eviction becoming more and more exhausted. It is the threat of eviction that tears apart these movements and not the eventual violence of the police or bailiffs. We are trapped in a survival mode – unable to grow.

I leave the waiting room and lay back on the dentists chair. “Can you feel this?” The dentist asks me, sliding a metal pin into what was left of the dental pulp. I scream and grab both arm rests as my back hunches and I take several deep breaths.

“It seems the anaesthetic has not worked,” the dentist says, “and I am not legally allowed to let you leave as you are in a fairly critical state.” I look at the medical student.

I have no address, I have no insurance. “Do it,” I smile.

In the white haze of pain I find myself hallucinating, being pulled back through memory to the streets of Berlin in the cold of a February day. I am surrounded by German riot police. I am not alone. I am outside of a youth centre that has existed in Berlin since 1973 and in the streets outside dance those who needed that space. It served as a protection, a place to gather and meet with friends. A community that as of 2019 has barricaded its doors.

I am outside of the Potse-Drugstore. The riot police watch us in the cold. Some are smoking. All are watching. I see Katze, a former youth at the centre, arguing with the police – tears in her eyes from loosing a space that meant more than four walls. A space that protected her as she grew up. The police officer asks me to somehow restrain Katze and I laugh. I look at the police officer and realise he is younger than me. I look into a young man’s eyes.

Suddenly there is a commotion as a teenage boy is pulled from the crowd and arrested, dragged along the ground by a group of police officers who try to bundle him into the back of a van. The entire demonstration moves after him and riot police jump from their vans and surround the kids as they move into traffic. The shadows of the police come from behind.

I see Katze kick an officer in his testicles, as I am pushed to the ground by another riot officer. As the baton rises I am pulled away at the last moment by a young man from the Poste. “Alles Gut?” he asks.

The three of us make our escape through the door of the Potse-Drugstore and up the graffiti stairway that leads to the occupied youth centre. Barricades are removed as the three of us pile in. The usually busy and dark space was now empty and lit with glaring strip bulbs. There was a roar from outside as the demonstration raged on. We run to the window.

“I am sorry…” the dentist pauses. “I have to break apart the tooth inside of your mouth.”

I shut my eyes and the cold rushes through my veins. It pulsates through all that traumatized dental pulp. I am sitting on the window of the Potse, looking out at the demonstration below. Watching the police grab teenagers and arrest them for gathering outside of their youth centre. I watch helplessly with the others inside the Potse as the screaming and police sirens filled the air.

These are the sounds of gentrification. When you mess with a higher power, it is important to not loose your nerve. I jump out the window.

Instead of hitting the ground, a sudden rush of cold air comes from the streets below and pulls me up, up and above the houses of Berlin – the large blocks and gardens and the tiny people making their way across the city. I see the smoke of fires heating millions of people and those trapped out in the cold. I see the huddled masses of homeless and I see through the windows of empty flats into the blank lives of no-one. A hand grabs my bandanna.

“Don’t fall,” Katze smiles and leads me back off the window ledge.

There is no higher power, don’t loose your nerve. I watch collapsed in a chair as the remains of my tooth are thrown into the bin.

Tweet
This entry was posted on 25 January, 2020 in homepage and tagged Josie Rey. Bookmark the permalink.