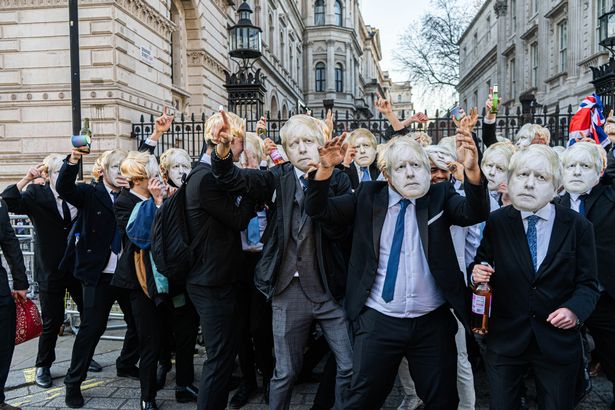 Spending plans have been unveiled.
Boris Johnson’s name is stamped all over
this new post-Covid economy:

Eat Out To Help Out,
live with skeletal remains,
abandoning public finances.

Democracy’s main entrance is closed
due to a serious police incident.
A woman has now been sacked.

One might say it was shocking
but it corresponds to a pattern of behaviour,
misconduct to overturn the system.

Armed police have surrounded
one of your favourite jumpers.
We all know the feeling.

Have the moths been feasting?
Boris Johnson will investigate ways
of repairing a moth-eaten jumper

but did not comment on
Deputy Prime Minister Dominic Raab
repairing and upcycling treasured items.

The Christmas lights are twinkling under pressure
and there is the sight of scores of Conservative MPs
voting against public health measure proposed last week.

Many of us think we have a novel inside us:
because they want to keep partying,
Boris sees himself as an energetic fiddler.

Don’t start a sex scene when your mother-in-law is visiting,
it doesn’t make sense. Sleaze and parties turn voters off,
they have little festive cheer. Bring in all the precautions.

A judge has rejected Prince Andrew’s attempt
to commit sexual assault and battery upon her.
Boris Johnson has apologized for Novak Djokovic.

The Duke of York is being sued by Keir Starmer
who said he did attend after hearing arguments.
Boris Johnson apologized before he confessed.

The leader of the opposition said the Prime Minister
was ‘offensive’ and an ‘error of judgement’.
Boris Johnson refuses to throw out his own booze.

First published at the 3by3by3 website.
Find out more and how to contribute at   http://3by3by3.blogspot.com/

View all posts by Rupert →
This entry was posted on 22 January, 2022 in homepage and tagged Rupert Loydell. Bookmark the permalink.