The Buddha of Suburbia 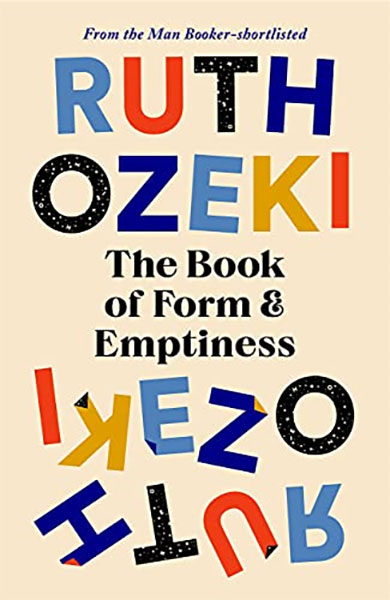 The Book of Form and Emptiness, Ruth Ozeki (Canongate)

Ozeki’s novel is a strange mix of the fantastical and the everyday. Partly narrated by the book itself, as a character, much of the first half of the narrative is like a Haruki Murakami story (or Russell Hoban’s remarkable Kleinzeit), with everyday objects speaking to Benny – the main character and another narrator, following the death of his father Kenji.

Whilst Benny tries to shut out the noise of the world speaking to him, his mother is busy clipping and filing items for a news agency, piling up newspapers and then CDs and computer detritus in their apartment, alongside knick-knacks and clothes bought on a whim at charity shops and online.

Benny ends up in a psychiatric ward, and on serious medication. After his release he cannot face school and spends several weeks hiding out in the public library during the day, where a mixture of found notes inserted into books, along with his own reading and research, lead him to make new friends and experience life outside of established society. He also takes his first drink of vodka, injures himself, falls in love and helps with a sky burial for a non-binary gender-fluid pet ferret.

It’s engaging stuff, although the use of a caricature East European dialect, with lots of ‘ze’s instead of the, feels somewhat contrived, if not slightly racist; and the heavy-handed allusions to Walter Benjamin and Borges sometimes get a bit much. But then the book starts giving us lectures about the nature of books, romantic twoddle about poetry, emotion and authorial experience; and later on we get whole chapters from a (fictional) zen decluttering manual that Benny’s mum is reading, plus a one-sided email exchange between its author and Benny’s mum.

By the end of the book Benny is ‘cured’ (that is things have stopped talking to him), his mother has finally managed to tidy up – with some serious help, and mother and son both get to meet the author of the decluttering book and hold an appropriate ritual to honour Kenji’s life and death. It all feels a bit disingenuous and disappointingly similar to ‘it was all a dream’ as an ending.

Although the author’s acknowledgements mention the term ‘psychic diversity’ and Benny himself asks his doctor why she won’t take him seriously, the ending feels far too neat and easy, though at least Ozeki shies away from telling us that ‘they all lived happily ever after’. This book is generously inclusive, warmhearted and impressively open to different states of mind and those on the edge of society; I just wish it hadn’t tidied everything up so unconvincingly.

Tweet
Tweet
This entry was posted on 30 October, 2021 in homepage and tagged Rupert Loydell, Ruth Ozeki (Canongate), The Book of Form and Emptiness, The Buddha of Suburbia. Bookmark the permalink.