Atos is a private company that’s being paid £100 million a year by the government to take vital benefits from disabled people. As if this isn’t shocking enough, Atos is also a top sponsor of the Paralympic Games – whilst wrecking disabled people’s lives…

George Osborne has vowed to slash £18 billion from the welfare budget, regardless of people’s needs and ignoring the alternatives. To help them do their dirty work, the government has hired Atos to ‘test’ sick and disabled people and decide whether they’re ‘fit for work’.But Atos’ Work Capability Assessments are driving disabled people to suicide, and over 1,000 people have died of their illnesses soon after being declared able to work.The government claims that the welfare system is being abused – this just isn’t true. Less than 0.4% of Incapacity Benefit claims are fraudulent, but the government wants to cut welfare spending by 20%.The government and Atos don’t give a toss about disabled people. This is about making ordinary people pay for a crisis caused by the bankers. It’s about making disabled people pay, instead of super-rich tax dodgers who cost us over £25 billion every year. This is an ideological attack on the welfare state; these cuts are a political choice. But we’re fighting back. 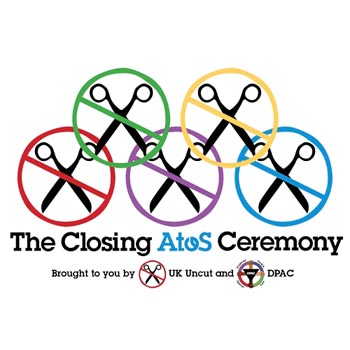 On Friday 31 August, UK Uncut and DPAC will shut down Atos’ London HQ for the Closing Atos Ceremony. Meet in Triton Square at 12:45pm for direct action and creative protest, with plenty of surprises…

The nearest fully accessible British Rail station is Kings Cross. From there, catch Bus 30 towards Marble Arch or Bus 205 towards Paddington from stop R or A, and get off at Warren Street, bus stop V.

Please email or text to let us know about your travel and communication support needs, and we will try our best to meet them: [email protected], or text 07502 022 077.

We understand that issues which affect disabled people also affect the Deaf community, and British Sign Language will be available on the day.

This action needs you! Join for the afternoon, or come on your lunch break. There will be lots of ways to take part – hand out leaflets, hold banners, or get involved in creative and daring ways. If you’re not in London, check the DPAC website for details and other ways to get involved in the Atos Games.

Atos are making millions of pounds enforcing the government’s unnecessary cuts. It’s up to all of us to fight back, defend our welfare system, and demand the alternatives. Let’s show them that we do give a toss.

See you in Atos HQ!