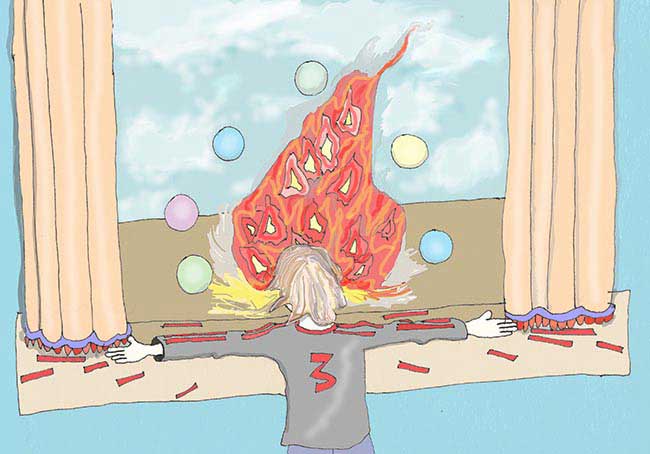 Jane enters carrying The Encyclopedia of Elegance.
Kenneth is sat at the fireside, wearing a Manchester United away strip shirt.
Nobody speaks.
Sound of distant sirens.
The curtain falls as the Chorus repeatedly chants “Avant the fireguard!”

The  audience is on stage.
A janitor addresses the empty auditorium:
“Follow everything with a :
People will think something is coming.”
The curtain falls as night falls.

Lolita falls from the saddle. The horse is real.
She declares the City to be unstoppable.
Her husband declares an ache for a second bout of indoor travel.
The curtain falls, having been insecurely secured.
What was going on there?
We will never know for sure. At the intermission Chelsea are 2-nil up.

4. The Crisis of Romanticism

Scene: a Subway in the United States of America.
Herman Melville: Let’s go find a tavern and put up for the night.
Edgar Allen Poe: Imagine roaring towards so much pleasure and when we arrive
it’s better than the leaflet promised.
Emily Dickinson: I hear ─  something ─
Henry James: We, surely, shall, one day, have had enough, I think, of books.
The curtain falls at the beginning of the 20th century.

The Egg Girl stands at her stall, wearing an Arsenal shirt, selling eggs.
Each member of the audience goes home with a tray of eggs.
The curtain refuses to fall on The Age of Miracles.

Tweet
This entry was posted on 3 March, 2016 in homepage and tagged Martin Stannard, nick victor. Bookmark the permalink.