The Militarisation of Caring Labour I last saw my friend Henry the day before he was deported. In the visitors’ room of the detention centre where he had been held captive for six weeks, watched by guards, we talked about how the clinical brutality of the place had gnawed at his mind, the several attempted suicides he had witnessed in his time there, the wife and two young children he was being forced to leave in London, and his fears about returning to Kenya, a place he had not seen for 20 years.

Soon visiting hours were up. Babies were prised from fathers’ arms. Partners, siblings and children stole brief hugs. Planes departing from the adjacent airport ominously roared through the last tender silences before detainees were escorted back to their cells. As we visitors walked out through the warren of security doors, I turned to glimpse the electric fence, easily 10ft high, which enclosed our loved ones. A sign was fixed to it: “G4S: Care and Justice Services”, it read, “We are all one big family, no matter who we are.”

This is not some kind of ironic, life­imitating­Banksy PR blunder. Care­ that basic stuff which produces and sustains us as human beings and communities­ has long gone undervalued within the family. As manufactured crises stretch off into the horizon, engineered to justify the retreat of state services and the fortification of their borders, the amount care work, and justice work, we have to do intensifies rapidly. We are often chasing to keep up. At the same time, that which is waged and professionally designated as care is being actively replaced with control, neglect and violence. State institutions whose hard edges have always been palpable: the police, prisons, immigration enforcement, the criminal justice system­ alongside their privatised surrogates, are bloating. They are supplanting the caring institutions – hospitals, schools, social services, housing and benefits services ­ that many of us rely on to survive.

In the decade leading up to the 2010 general election police spending in the UK grew in real terms by 50%. This means that the police spend large amounts of time dealing with things that have nothing to do with them, even on their own officious terms. Steven White, chair of the Police Federation of England and Wales himself argues that only 16% of calls to the police are about ‘crime’ – not to mention what this, defined by an organisation that imprisons women for reporting sexual abuse or a college student for stealing a water bottle ­ even means.

For most of us, this signals the entrenching criminalisation of our needs, our relationships, our everyday activities, and our pain. Traditionally social concerns, like a person with mental health difficulties expressing distress in public, are treated as criminal ones. Some 9,000 people who needed such ‘immediate care’ were taken to police cells rather than hospitals in 2012. As distress mounts and mental health services’ capacity and expertise are steadily shut down ­over 2,100 mental health beds were closed in England from 2011 to ‘14 ­ police then become the de facto frontline responders to a society driven to despair and without support. Considering the police’s track record dealing with the mentally ill, particularly those of colour – ­ that is, killing and imprisoning them ­ – the avenues of care look increasingly like a battleground. The experience of the police and criminal justice system itself, of course, is often stressful enough to worsen anyone’s mental health. For those already held captive: in detention centers, prisons and youth offending services, incidents of self­harm, suicide attempts and mental health diagnoses have been steadily increasing since 2002.

When police do not directly replace carers, claustrophobic webs of legislation ensure their controlling and punitive techniques infect those entrusted to care for us. Those of us who are sick or disabled are forced through work capability assessments, workfare programmes and sanctions in place of material and social support. Thanks to the tireless work from campaigns such as Disabled People Against the Cuts, the lethal consequences of such policies, estimated to have contributed to the deaths of over 10,000 people, are now well known.

Under Prevent ‘anti­terror’ legislation, even nursery teachers (could you think of anyone more nurturing?) are obliged to behave like police in increasingly racialised ways. Teachers are now forced to watch out for and report toddlers they suspect of harbouring ‘terrorist’ sympathies ­ in order to monitor and, as is likely, criminalise these children’s families. Outside of school, for mothers and their children, receding support is swiftly replaced with an aggressive scrutinising and ripping apart of family relationships. More children than ever are being referred into local authority care as child benefits, mental health, domestic violence and family support services – the resources that enable mothers to raise families, are drastically scaled back. Reports confirm that some women are chronically targeted by this process, having multiple children removed from their care at birth, with domestic violence cited as the most common reason for removal.

Simultaneously, refuges where women have a chance to escape violent relationships are closing down. Women are abandoned and then told they are unfit for motherhood, for the crime of having nowhere to go. As Professors Kate Morris and Brid Featherstone consider, “we look at an empty fridge and accuse the mother of not providing food for her children, without asking if she can afford to”. The overwhelming majority of women targeted by these practices are women of colour. 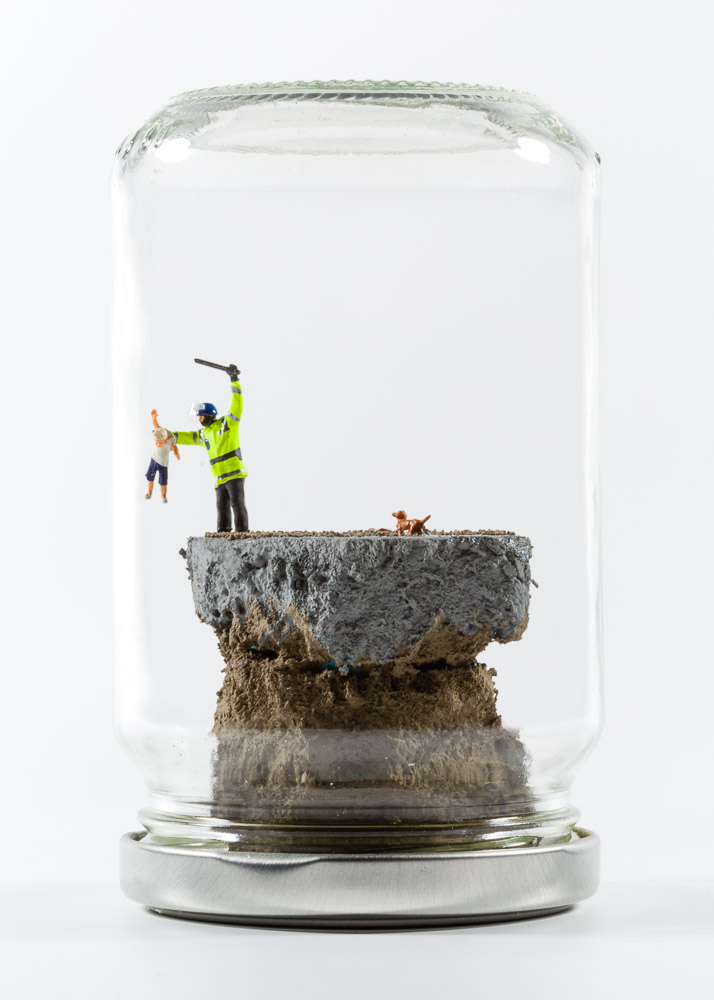 Throughout its empire, Britain has long attempted to disguise domination and control as care and salvation. Indeed, asylum seekers such as Henry were the first targets of this weaponisation of care work within the UK. He was tricked into G4S’s crushing embrace by dishonest officials he went to for help, in a country where ­ though it had plundered his own country and called him a subject of its ‘Commonwealth’, he went looking for safety. If we want to do more than stem the flow of blood from expanding criminalisation, the struggle against this perversion of caring must be an anti­-imperialist one.

With the eclipse of caring institutions, the police force has infected almost every area of public service. When threatened with budget cuts of its own, the bloated institution openly threatens ‘paramilitary style’ policing. Considering that the police now occupy such diverse and unlikely roles: what will this mean for the majority of contact ordinary people will have with the state, and its private substitutes? It is not coincidental that the British prison population nearly doubled under New Labour, the architects of this gross expansion. We should not consider it coincidental, either, that the current government is funneling millions into updating and expanding prisons ‘for the 21st century’ across the UK. Our first ‘super prison’ opens in a year’s time. This is what David Cameron means when he announces a ‘crackdown’ on the very poverty he has a hand in creating.

It is from women – the primary carers in 90% of families, that Chancellor George Osborne has taken £11 billion of his £15 billion cuts package. It is also women who occupy the majority of public sector jobs and, as the welfare state is emaciated, who stand to lose their income and autonomy, just as we stand to lose their expertise in public and caring professions. With each death, imprisonment and rip in our social fabric, the work of grieving, caring and of seeking justice often falls on women’s shoulders. As labour traditionally performed by women is perverted and undermined by punitive, controlling and criminalising institutions the informal, everyday caring work that women have to do increases. We organise food, shelter, clothes, childcare, companionship, safety, hospital appointments, court support, justice campaigns, housing solutions and resistance to refuge cuts– we look after each other, and we fight.

Becka Hudson is a writer and filmmaker. She works at Crossroad Women’s center and is currently directing a play Jagged Edge, showing at Rich Mix from 17th June. https://www.richmix.org.uk/events/theatre/jagged-edge

This article was originally published on January 16th in ‘issue zero’ of the newly launched print edition of the International Times. A limited number of copies can be bought from artist Darren Cullen’s online store here: http://spellingmistakescostlives.bigcartel.com/category/international-times

.
.
Tweet
This entry was posted on 3 March, 2016 in homepage and tagged Becka Hudson, Issue Zero, Jimmy Cauty, The Militiraisation of Caring Labour. Bookmark the permalink.

One Response to The Militarisation of Caring Labour