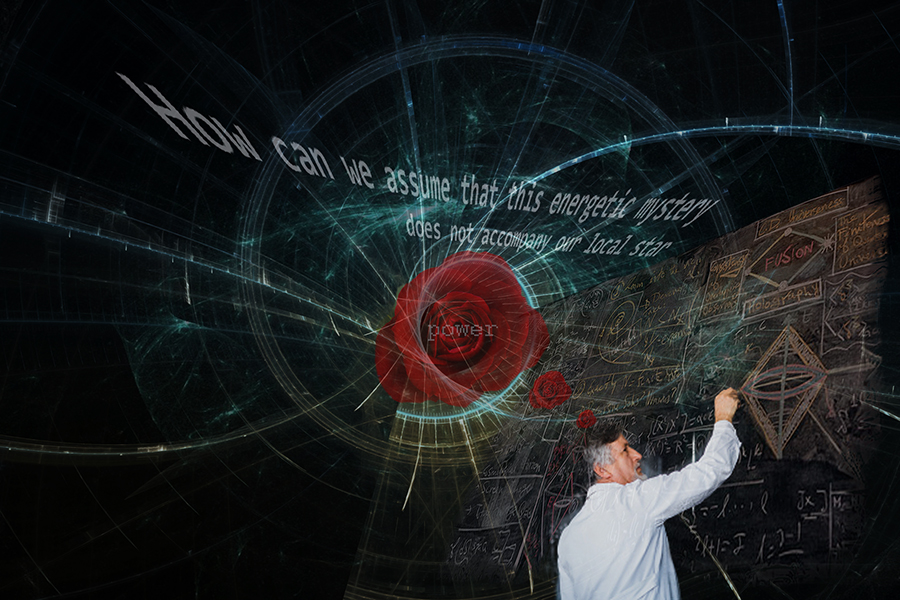 One might better ask what dark matter is not than ask what it is. At least some intelligible answers will be forthcoming. So far detected only in the minds of cosmologists, “dark matter” began life as little more than a name given to the answer of a problem that hadn’t been solved. Today it has grown into a cult-like religion within supposedly ‘rational’ science, supported by faith alone and having less evidence than that ascribed to many Biblical miracles. CERN, the most expensive boy’s toy in the world, has been refitted at the cost of several billions in hope of detecting this elusive stuff, which is physical and supposedly makes up 85% of our galaxy’s mass.  One is reminded of the centuries long search for the elusive “ether” thought to carry light to our world, whose “existence is a fact that cannot be questioned,” as Lord Kelvin put it in the course of his failed 55 year quest.

What is going on here? Why are otherwise conservative evidence-based scientists declaring the existence of something when they haven’t got the foggiest clue what it is? Perhaps there is another way of looking at the problem that dark matter would solve. That problem lays in the movement of stars within their galaxy. If they are all just balls of matter being moved around by the gravitational force of a big black hole in their middle then the stars at the edge of the galaxy should be moving much slower than the ones near the middle. They are not. That’s the problem.

Let us alter our perspective for a moment, recognizing that eminent scientists of antiquity, including Plato, Aristotle, Pythagoras and Ptolemy, were not bound to a Christian taboo prohibiting scientists, or anybody else, from infringing on their religion’s monopoly of all matters spiritual. It was the Church, not science, that assured humans we were the only receptacles of consciousness in the Universe, besides God, angels and the devil. Science has dismissed those last three but regards the primary assumption as rational scientific tradition and now includes a few higher mammals.

Letting go of all pre-programmed assumptions, which of these would you find easier to consider?

1)     That for every kilo of matter we can detect in our galaxy there are five and a half kilos of matter, of physical gravitational stuff, that is completely transparent to our most sophisticated detection techniques.

2)     That our multi-leveled dynamic source of the light of life knows life itself; that the Sun is not some accidental light bulb in the sky; that stars are conscious celestial beings.

I suspect most readers will opt for No1, if only because No.2 has never been presented to them before, suffering from zero percent exposure.  However an unbiased viewing of the scientific evidence weighs more towards conscious stellar beings than to random balls of plasma. This idea and its logical implications are further explored in my book, Sun of gOd, Discover the Self-Organizing Consciousness that Underlies Everything.

Taking this new (or ancient) perspective enables us to view our knowledge of cosmological behavior in a completely new light. A star, fashioned by the electromagnetic force from a cloud of cosmic dust, ‘feeds’ upon matter, converting it to light in a perfectly contained steady fusion reaction, something our finest scientific minds still strive to achieve armed with massive funding and our highest technology.  Stars convert simple hydrogen into other elements, from carbon to silicon, from calcium to iron – a feat of ‘simple’ transmutation that we have not yet achieved, intelligent though we are. Our Sun connects to earth every eight minutes through what NASA calls a “magnetic portal,” when they think that tons of high-energy particles are exchanged. Giant electromagnetic fields link galaxies together across the vastness of space.  It becomes increasingly difficult to explain the joined-up nature of this ordered Universe as random accidental action, with no shred of consciousness apparent until apes lost their hair on planet Earth and began building tools.

Consciousness is acknowledged to be the greatest mystery of our existence yet we apparently know enough to know nothing else knows it. How can we assume that this energetic mystery does not accompany our local star? Perhaps consciousness permeates the entire Universe, manifested through the electromagnetic force that permeates everything from the inner atom to each point in the expanse between galaxies. I look forward to the day when science overcomes the religious taboo and brings the concept of spirit, or extra-human consciousness, into the field of serious study.

Right up there with dark matter on my scale of preposterousness is the multiverse, conceived as a means to explain away this Universe as a random event that just happened to bring everything together in exactly the right proportions and sequences for matter to exist, for stars to burn and so on and so forth. Somebody even put a number to it, calculating that we would need 10^90 randomverses (as I put it) in order for one of them to turn out as uniquely as ours. Considering there are an estimated 10^50 atoms in the Universe and this equals over a billion trillion times that many, we get an idea of how uniquely unlikely this place is. Of course nobody has or ever will detect any of these randomverses, though many good minds indulge in the dalliance of theorizing over them. Once again, just add consciousness as an inbuilt feature and we do not need other unique verses, though they may well exist.

The problem is not with the motion of stars but with the irrational bias on consciousness that Christianity engraved into the scientific mindset. When scientists throw out all things spiritual, triggered by equating it all with irrational Biblical stuff, they reject with it the idea that other realms of consciousness might exist; that “the greatest mystery” of consciousness could be more widespread than we think. If stars are conscious energetic entities then there is no need to explain their speeds and trajectories by purely random mechanical means. Though we might one day understand how stars’ electromagnetic fields manage movement through space it is unlikely that we will ever comprehend their reasons for travel.

We do not need dark matter. We need only recognize that stars, our Universe’s most populous residents, are not simply dead dumb balls of plasma.