The First Draft – a flash fiction 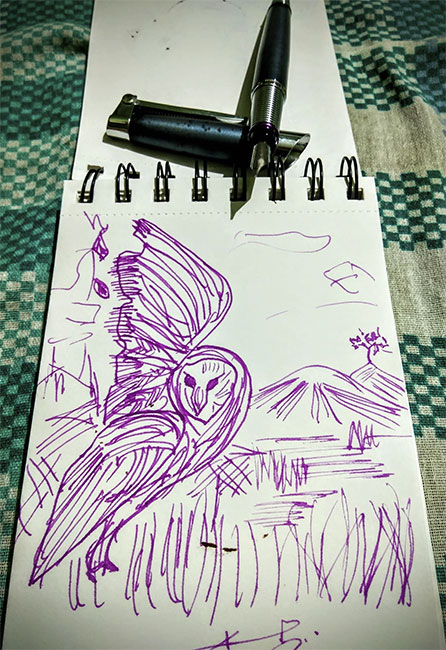 Perhaps for quite a while Anant ji, the pen vendor, had been writhing to utter what he finally told me on the first Saturday of the last month, “You, sir, visit my shop five times a week and almost every week, tell me and my customers those tales and anecdotes from your life; you should write some and publish them as a source of earning.” ‘Professional’ he added.

I shook my head, “No, dear. I am hardly capable of scribbling a list of the items I should purchase and take home to show my family that my daily outings are not as fruitless as they actually are, and besides my life is nothing outside those stories I fabricate. I spend my miserable life in your company. I work no longer on the advice of my former employer. I have more life now at my disposal than possible in any human lifetime, and this life of mine is not exactly lively.”

Anant ji put down one vintage fountain pen he worked on. He smiled, “Exactly what I meant. Your words are humorous. No one I meet these days talk this way anymore. ‘Ha’ to your use of ‘life’  instead of ‘time’.”

“You should write with a fountain pen in the old fashioned way. It would slow down your outpouring, clear your thoughts.” He salvaged the cleared feed from the liquid in a tray.

“I had one; the one I lost. It was a gift from my father for finishing my high school. Its barrel shimmered, flakes of green, celluloid dream. It had a gold nib. I lost it in a feat of anger. I keep the pencase in the top drawer of my study table as a reminder of the ruins rage leaves behind before it dies away.” I began to elaborate the storyline.

Anant ji raised his hand, ” Save your energy. Write down this exact story as your first one. Just write it with this pen.”

He foraged through his boxes. I said, “Fountain pens make me impatient these days. Perhaps they also ignite the fire of guilt. They are expensive as well.”

“Then I would not let you gift me something expenses. I hardly spend any money at your shop.”

“It is a fountain pen but not an expensive one. Use it, and the writing will be the return-gift.”

I saw it was a Pilot. I shivered. I held the King Arthur’s sharp legend. I finally pulled out the lost relic of childhood from the stony sheathe of penitence.

“So far I can tell,” Anant ji said, “yours was a Pilot from another era. This one I give you is almost an entry-level, but nearly as good.”

He caught me in his web. I nodded. I should write. I should write how my father, a child himself back then, ten or eleven, visited a pen shop now extinct, and how the shop owner startled my father by throwing one steel nibbed fountain pen like a dart against a hard wooden desk and showed him that the pen still worked.

Perhaps while writing I could avoid the puns life threw at me all the time.

I would write how I lost the pen. The anger – I no longer remember the cause – unveiled something pure, pristine and evil, a noise of scratching on the blackboard.

The story I wrote and rewrote, typed and retyped was short and furious. Its journey ended in that very pen shop Anant ji owned.

Another pen, another time, the same brand, phoenix undead amidst the ashes we gather singing ‘Ring-a-ring-a-rosies’ and holding this liquid life. This was my story about the relativity of the state of beings.

I scrivened that in my father’s memory most parts of the year were autumn, and so were mine. Was the autumn a catalyst or a laboratory or the only protagonist we never mentioned.

The rejections cluttered the yard of my inbox and clogged my doorstep. The world of submission was cursed with eternal autumn.

Anant ji would never ask me if I was writing or if I had already written something, but he must have noticed the ebbing talkativeness, receding presence.

One evening I opened my desktop, found all the ‘Pen’ in my typescript and replaced them with ‘Pain’ in one document and copied that into another document where ‘Pen’ transformed into ‘Pane’.

Both the versions were accepted by two publications. Yes, Anant ji, indeed they were.

Tweet
This entry was posted on 18 September, 2021 in homepage and tagged Kushal Poddar. Bookmark the permalink.