THE HALF TON HEART 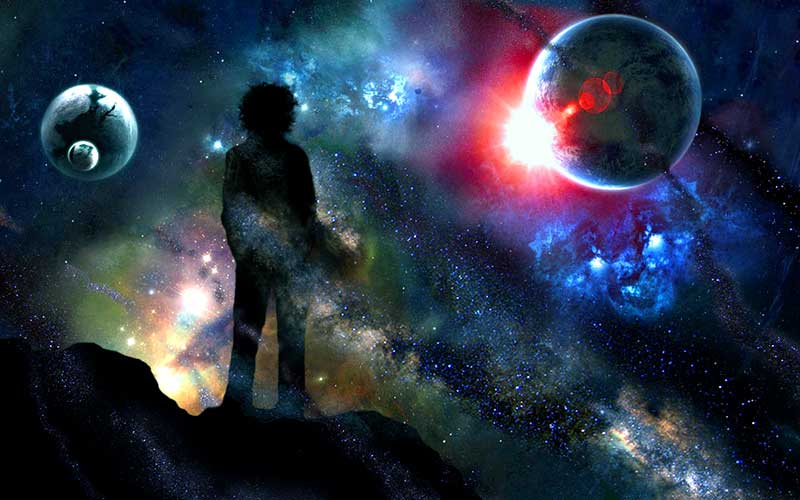 Newly released from the room
He is now traversing across the far reaches,
Writing no doubt and recording
The astral flame and scorched star.

As behind him, nebulae fold,
His exuberant hair’s glazed by comets;
A black hole sucks and blisters
As it wrenches away on God’s breast.

His spirit soars on. The red bruise of Mars
Heals beneath him. In this star blood
All planets draw galactic food from cold cuts.
Jupiter’s immense majesty.
Then, Saturn’s rings, where he dances;

A soft shoe beatnik shuffle
To a Thomas like rage and whalesong.
Turning now, flying free he hears whales
Call to him from the darkness.

In the shimmer of stars there are dolphins
Winking at him, both fins up.
A sacred elephant speaks, complaining
About a passing spacecraft’s warped rattle.

Plumes for travel. He supercedes solar systems
In a peacock strut, colours bright.
He is a rainbow in red, iridescent blues,
Golden rivers. Green too, from Nature,

As well as purple and white, primed by sex.
He is the drinks he drank, the food he filched,
The sad planet. The books and the learning
And the magic he gave which won’t rest.

And as he is padding now from earth’s straw,
He is knit into the universal night
Like god-fabric, blanketing reason
With his half ton heart and insight.

He will be rewriting death as we speak
And turning it into poems
As his voice and beauty become
In our eyes, fresh starlight.

View all posts by David →
This entry was posted on 7 February, 2018 in homepage and tagged David Erdos, Elena Caldera, Heathcote Willams. Bookmark the permalink.