Trump And Morgan Get On Like Your House On Fire

Posted on 8 February, 2018 by Ethan Harrison 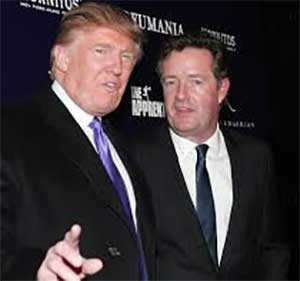 Caption : Trump and Morgan like two stray dogs in the park

The world’s media held its breath last week as the two men on the planet with the least discernible intellect; Donald Trump and Piers Morgan, finally gravitated together and, like two stray dogs in the park, delivered the much-expected arse-sniffing session of the decade. Media pundits were not dissatisfied as the buttock-licking action was such that, after the interview, a cast for a bust of Piers Morgan was taken from the imprint he left in Trump’s backside before the Leader of The Free World was rushed to hospital to have reconstructive surgery on his sphincter and to have splinters of Morgan’s tongue removed from his colon.

Details of the interview itself are sketchy at best as the toe-curling embarrassment induced by the men was such that anyone witnessing more than a thirty second segment had a mental relapse before passing out and coming around non-the-wiser. Fortunately, a robot was used to interpret the dialogue and, sure enough; the ‘Q&A‘ session between the international cock-wombles produced some of the worst fawning sycophancy yet to be witnessed by humanity.

Professor Robin Acies PhD, Head of Political Psychology at Brentwood College, gave us his insight, ‘First, let me just say analysing the actual dialogue of this interview, in any rational scheme of perception, has all the use of dissecting a conversation between a pair of K-heads wrestling in the bin juice on the floor of a dirty squat party at 7am in the morning when the gabba’s banging – so to speak. Even considering the people who actually run America would let this so-called businessman and reality TV star have anything to do with the real mechanics of the political apparatus in that country is like thinking Dirty Den was the King of London and if he could’ve just sorted out his relationship with the tempestuous Ange then perhaps the rubbish in Islington could have been collected more than once a week; it’s absurd. As for Morgan, the man brings a new meaning to the word ‘countryside’, [sic. cunt-ry-cide] and his part in any meaningful expression or exchange of information in the telecommunication age, or any other age for that matter, is far, far, far less than nothing. Unfortunately, I believe the important factor here is that the interview happened at all, and that, in itself, proves, beyond any shadow of a doubt, that the established media, as an instrument to reveal any semblance of truth within the naturally occurring political dialogue, is, in fact, entirely and intentionally obsolete. It would, therefore, seem fairly safe to conclude that other forces and personages to those we are shown control the US, and therefore the West, and therefore the World. As this, in itself, is a subterfuge of the highest order then one would naturally assume those behind this charade wish to remain concealed for good reason and that this reason must be that they would be even more unpopular than the men we currently believe to be our leaders. At this point any sane person would surely be a little concerned at these rather alarming but, none the less, rational conclusions. Though these characters, and they are just that; characters – Trump and Morgan appear to get on like a house on fire, unfortunately, and perhaps for many people more than metaphorically, it will be your house on fire.’

Just when you thought Trump talking to Piers Morgan couldn’t get any more stomach-churning. … the …

View all posts by Ethan →
This entry was posted on 8 February, 2018 in homepage and tagged Ethan Harrison. Bookmark the permalink.