The House by the River

Posted on 24 August, 2019 by Lawrence Freiesleben 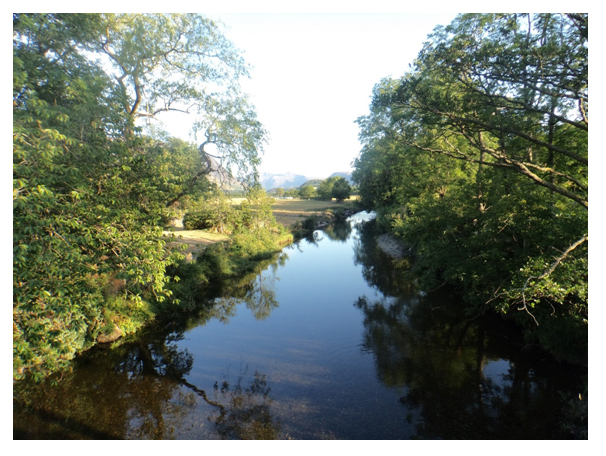 That suburban-style house by the river, hurt Lucy’s eyes – her wasted potential, the heart lost in time, the white render . . .

It was part of the village and yet it was free.

Across the water, it held the bank to itself – the whole landscape beyond . . .

Alone by the end of the bridge, it implied the entrance to somewhere else. Yet from the mystery and challenge of the widening evening beyond, it was also detached. Its large, innocent, plate-glass eyes, the open-hearted windows to a restful soul.

Lucy free-wheeled to the middle of the arch of stone and came to a halt. This was the centre point of her calm day. She could go on or back. Nearby, below, on some crazy-paving just a few feet above the clear-shining water, an aged Mrs Miniver[i] was gardening, clearing overgrown flowers from the path to the landing stage.

Can the deep aspiration for paradise only be satisfied by self-delusion?

The luck of some people, do they realise it? Did she realise hers – halfway from the council estate, but never likely to have the ease that owning a house such as this, might give? Her windows were always changing.

Did this Mrs Miniver have children, grown and departed? Of course, she must. Why else keep extra rooms? Why tend lawns with varied borders? Why have so much weeding and never time to sit in the sun or dappled shade until now that she accepted being retired – when sitting might not have the same appeal. When sitting was like giving in.

“I don’t love you anymore,” he’d said with reluctance a few weeks back, distraught to hear his own words aloud.

“I know,” Lucy had sympathised, though it broke her heart to finally hear him say what she knew. “I thought if I carried on loving you,” she’d tried, “if I could be calmer in the world – less angry – you might come to love me again. But it was, and it is, too hard. There are too many reasons for irritation . . . I couldn’t be quiet with enough good grace.”

“You don’t know what I feel!” He’d shattered out, “It was more recent than that.”

The past hurries away and is gone, lost in long grass, camouflaged, leaving only a slight pattern upon the chaos or hidden order.

From the mellow-stone side of the bridge, Lucy watched Mrs Miniver gathering and then pruning inside herself. The older did not see the younger woman above – or did not deign to notice.

“Maybe I don’t know exactly what you feel, but I’ve always felt what you don’t feel. I know you can’t help it either – we are all victims of something – but perhaps  . . .”

“What does it matter,” he’d stated with weary asperity. “It’s irrelevant now. Ideal worlds; ideal relationships. Every one of us is trapped inside. We can’t give our inner selves, or only rarely . . . and then, with you, it’s like being granted a ration. There’s no freedom in it. That might feel like love to you; it might even be love; but like most of life itself, it doesn’t register enough – it just doesn’t come across.”

Lucy glanced back over the way she had come.

Under the bridge, between two lands, the water flowed its transparent beauty.

From the untried country beyond the bridge, she returned her gaze to the house by the river – open within the infinite texture of its garden. Was it a fragile outpost or an island of safety? A big tree, hushed sentinel, with its massive trunk and purple leaves, shaded part of its walls and reflective glass. A copper beech with silent power. Dark heart and mind to the guileless house.

But though the tree appears as one, millions of tiny leaves contribute to its swelling mass. In the breeze, rustling a moment, Lucy felt it as a buzzing leaf-hive of pins and needles. Its unassuming protection pretends indifference, but she could hear and see it. It had become a confusion; a civilisation lost in stupid excitement – against fear or against numbness.

The white house had no worry of this. If it could have sung a simple song it would have carried on, oblivious of the heedless, headless energy beside it – with its breeding mass of exhilarations, tiny deaths of the inescapable impulse, the twisting instincts of connection, the wasted potential, the lost time . . .

All this, buzzed on in close-up.

Yet faraway, here in the breeze, all became calm again. The beech is whole. A beautiful tree in unity. Nothing more nor less. Its branches sway slightly, and Mrs Miniver is dead-heading roses.

The strange thing is, that the most calming thing in my whole view, remans this man-made house that can’t have been here for more than fifty years. Calmer still than the placid summer mountains in their blue and white distance. Alongside its guarding tree, the house implies and indicates a different meaning to the landscape – as if all the grandest trees in the acres around, alone or hidden in forest, are the pillars of an ideal society.

As for him, after all our years together . . . has escaping the role as wife, as eventual mother, made my desire for a time in the sun, more acute? Yet don’t the fields and hills, certain unanchored buildings, the breeze, the turnings, give exactly that as I pass?

The idea of future, of love in the passing villages away from childhood friends we hardly knew, their lives now spread over counties and further. Cities far from where we grew up and first encountered the world . . . deeply in-settled – a sense-depth of leaves and bricks, streets and lanes, of history immemorial, never known: For to know too clearly, destroys an essence greater than all particulars.

She looked down into the glowing garden between the clear house and the clear river, but she did not envy Mrs Miniver.

For many years this garden had been the older woman’s centre, here by the water. Her biography was in the past, yet still she lived on. Lived without living perhaps, like most of us, she realised to herself. She barely noticed her husband anymore: in a sense, each of them had absorbed the other. Both plumbed similar depths. Depths of mystery or indifference. Of course, when children and grandchildren visited, she surfaced; polishing the table and cutlery in anticipation. Later, for those unusual evenings, graciously her husband would tend to the mahogany cabinet with its coloured array of drinks. Few like to betray the trouble behind their eyes. Their living room could be lovely at evening. It had so much clear window it was like being outside, and the leaves of the trees made the low, rich sunlight flicker. It was magical even sometimes when she was alone.

She smiled to think how conservative she must look. A gardening wife long past her prime. The peak of her career had spanned less than ten years, tailing into exploitation. To give your body to the camera then, was the latest fashion, a feminist freedom. Now that she was a grandmother, the kindly family attitude was that she’d been bold and daring – rather than ripped off.

Discreetly, she looked towards the bridge, where the same young woman paused. Life was over in a flash, and it seemed as though she’d spent centuries of it in this house and garden. Together they had sheltered her and given an inner kingdom. She did not have time to speak to strangers. The big copper beech rustled in the breeze. When the younger one was as tall as its likely parent, in summer the bridge would hardly be visible at all.

Meanwhile, Lucy cycled on. Into the new world beyond the bridge.

[i] Partly a reference to the 1942 Hollywood film, whose ridiculous/fascinating vision of England comes from some never-to-be-forgotten parallel universe!

The Jan Struther created character of Mrs Miniver began as a middle-class observer of life in The Times (circa 1937) and became the archetype for a type of privileged Everywoman – if that isn’t a total contradiction! See:  https://en.wikipedia.org/wiki/Mrs._Miniver

According to Churchill, as propaganda towards encouraging the U.S.A. to join in the fight against Hitler, the film was worth either “five battleships or fifty destroyers” – due perhaps to the efforts of Alsace-Lorraine born director William Wyler: http://www.bbc.com/culture/story/20150209-the-film-that-goebbels-feared

View all posts by →
This entry was posted on 24 August, 2019 in homepage and tagged Lawrence Freiesleben. Bookmark the permalink.