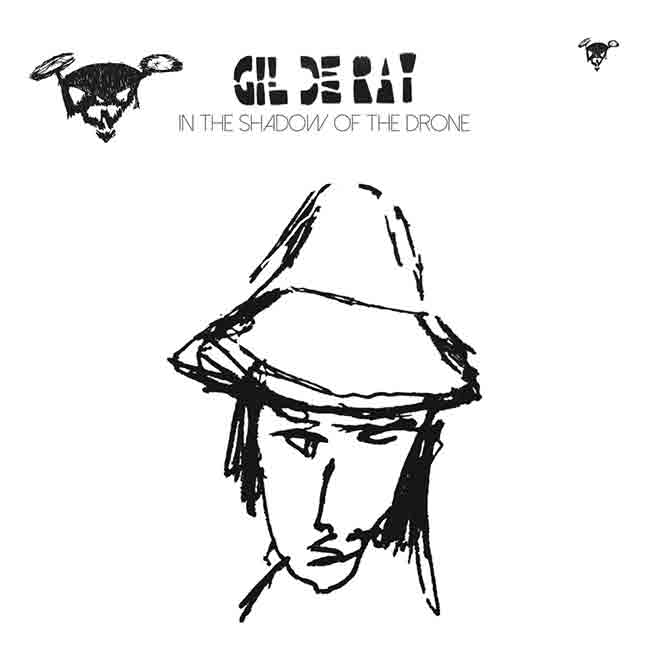 What is music for?

To break ranks with our own modes of being,

And change the codes, calls and systems that navigate for the heart.

In Gil De Ray’s new release, IN THE SHADOW OF THE DRONE,

The sound teaches, as each song-target finds focus,

Fired as they are by Ray’s art.

This is the graphic novel as song,

And tract for becoming, with each piece of music

Urging the form past its crest. The acompanying images scorch;

Soundtracks for the eye, as the artist and expert musician

Spells out the dangers in ways that are actively Pinteresque.

And fate’s chorus to play freeing keys that unlock us

While we sit subdued in our cells, The keys rouse each dream’s

Pitch to make the so called known day a fresh nightmare

In which the streets we claimed proudly now maze and betray us,

Pushing us all beyond signposts directing us down towards hell.

Here, then, is an album assault in the old fashioned sense,

Spearing futures;a mixed media market that barters at once

For the soul, And all from an artist who knows how to negotiate

The split promise and unify with hook, chorus, image

And illustrated word, all we know. Or all we should know.

Each song is a hand grenade made from chord shapes,

Thrown from the body of both singer and guitar,

Into a thought-storm of drums, as the electronica gathers,

A musical climate in which a run of notes traps a star.

Over; important at once to find image that represents us all

before the signalled attack

For which this buzzbomb droid acts as herald,

Turning each face to graffitti, scrawled with grace

As its burning and before those who would kill us

Itching now to surrender all women and men to death’s hush.

Gil De Ray says as much in his credo intro:

The war is one fought for our minds,

Our consciousness, too, through wrecked conscience

‘as the algorhythmns and data harvests’

And the enemy’s flags are unfurled.

A hatted man’s silhouette fires at us from the page

And could for a moment, be Burroughs, but is more likely an agent

From the ruling elite with his gun, setting his sights on the crowd,

Chasing no doubt the assassin as a means of disguising

The war declared on us, the war we never knew had begun.

Trump’s enabler – with a yellow star draped across him.

His Quiz Show sneer mocks the spectres who once lost to lyme,

Starved for race. This would be despot defies,

Even as he is defiled in this image, and made all the more

Hateful through the sunstruck slick veneer of his face.

These opening pages reveal the scale of Ray’s vision,

We are the martyrs and the murderer’s too, stained by fate.

LOSING CONTROL shows the slip as the appalling truth sours.

A chiming chord leads us down reverberated steps to the well

From which the soothsayer sounds as the vocal ‘heart-echoes,’

Ray’s voice a toned warning, its strength and warmth cast like spells.

The irresistable ease in which this first song unravels

Provides a means to deliver an album of pure alchemy,

As the modern age is displayed with a late sixties style

That carry truth and the heart’s (dis) harmony..

I can feel it in my skin.

When the blood begins to flow

There’s a certainty you know

All the victims get evicted

When the truth becomes another show

you gotta binge on..’

As we take on that truth we too are infected,

Mikey Buckley’s guitar blisters through as if the complaint’s

Into the darkening spectrums of blood,

We’re the wounded, drowning while swimming

Through God or the PM’s second flood.

Trump appeals with camp hand in the following image

The so called pussy grabber grabbing himself sans le drag.

Instead, a trio of drones costume him with a death stoked tiara

As in red shadow, swastika stars dress his flag.

EGO AND I GO smashes through, as the wah wah peddle

War blazes: song as condemnation and soundtrack of course

who courts the princess in each of us

And comes on her, forsaking sperm they just stain us

With the print of their guts and spiked shit.

Ego and I go

And so we do, swallowing all of the mistakes we are granted.

As this sneered creed ensnares us and we no longer know

As a totem while a cult tribe observe us, appearing beneath its gaze,

On a ridge. Ray mixes media as he draws and all painting styles

With his music, as the forms fuse through art’s chorus,

Allowing the placing of verse and tone to find bridge.

It is a threatening sight infiltrating all senses,

As from stark shadow the threat is increased as he sings.

Like fast gunshot fire, into the sleeping brains to remind us

That to live and live freely is to see at once all that’s wrong.

Our selfish ‘cult of Dionysius’ have been blind

And the medium stripped of its message,

And so Ray, like Mcluhan is moved to inform now

Through song. That underground sixties vibe 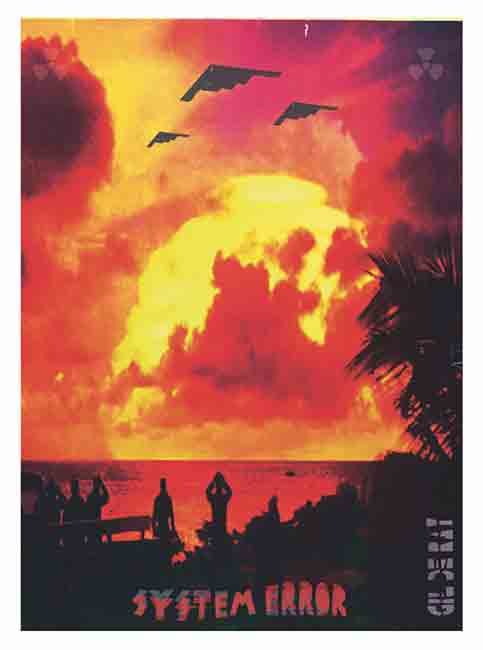 Sounds that return us to an Orpheus on lead guitar style

Enclave, in which the dangers we face

And the masks placed across terror are bacchanales played

These songs sound like gold rivering through secret chambers;

Still precedes. We are the cult that allows ourselves to be eaten;

Prey to another whose toxicity flavours the corrupted dream

We have offered and on which, stripped of purpose,

It so remorselessly feeds.

Across a gloriously voluptuous sky,

The nuclear achieves the orgasmic, as startling yellow

And reds explode kingdoms for which the trio of drones

Become crown. The page thrills you at once

Just as it terrifies you, as all signs of life blister

And in dry colour and blistering heat the heart drowns.

Hope is exploded and death creates the new skyline.

A gathering in the shadow watches sky fire.

The Immenance stuns you. Here is an image

As not only judgement but process as well has been warped.

Ray shines out all the more, his sermons from moral pollution’s

His and Buckley’s sounds are ecstatic

As they try to lead us on and restore

The times when we knew that there could well be

A future, were we not so reliant on the attitudes and behaviour

That keep us outside the closed doors.

The guitar’s angry rattle, the snarl of wah wah and groove

Underlying, the unstated beat that grants bodies the places

To change and transform, it is all in this song as Gil De Ray

Spotlights danger; their ‘pyschic vampirism’ must not claim us,

We must learn and rise as before. The ‘insecurities of the state’

Have been passed and even pissed on the public,

As the system collapses we need to ‘shut down and restart.’

Yet surprise us, each one becomes the soul’s theme tune;

Films for the brain, soundtracked art. 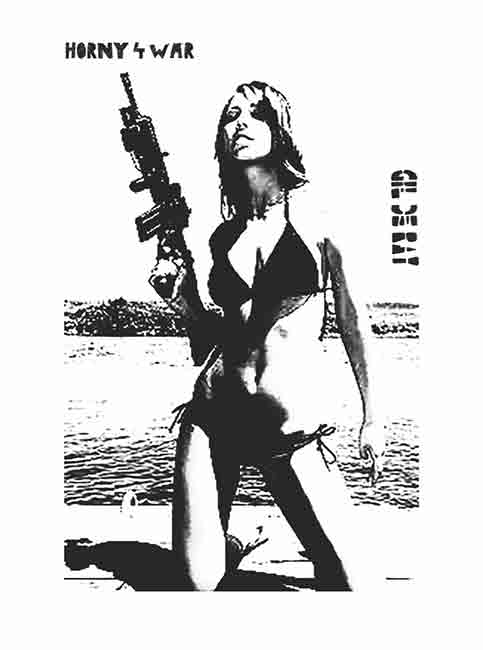 Take a girl with a gun and the hetero male will surrender,

All fears and desires will precipitate his collapse.

War traps all men with the deceit of fulfillment

And this simple image, while monochrome shows thrill’s crap.

When we conquer – but its only the vanquished who receive

That precise kind of sex. The image attacks

And provides condemnation. We fuck ourselves,

Or fuck blindly, unaware of the horror

As the prevailing cunts smear each test.

We fight deluded and strive to achieve this girl’s glory,

But she grins as she watches. This girl has listened

And only she’s close to what or who will come next.

BURNING FLAG skitters in on a tip hop beat

And what could bea House of Love guitar figure,

The notes curved and folded, like a warm embrace

As he starts to paint harsher glories,

There to trick us,

Rattling some of the tectonic shifts within dance.

Or stumble blindly when debt demands the full cost.

Are we still together?

And doesn’t recognise the dance partner,

The singer’s sanity stripped of value as veins and soul

Feel the loss.With the blood flow obscured and even diverted

By our need for false glory, the richness of the track

Here is music that saves

The hopelessness in the lyric,

With a leather strapped flourish and suspended chords

Two drones crest a blood moon in the following image:

The rising immigrant in utero awaiting the chance to ascend

From the darkness of fate to spark the prejudice

Stacked against it, here is one sundered spirit

Denied both chance and hate’s end.

As the fate is cast for the foetus,

With each individual unwanted

We are all set to deport; what the system seeks to enforce

Is not the cause to complete us.

As we deny our compliance

We try to avoid

the ruling hook that aborts

Whatever tender flesh we still have

And this is what his epic song savours;

There is hope in the triplets

Of body and note as death looms:

I was born under a nuclear sun

From the inside of the womb

To the outside of the tomb

That stamp, syncopated as a visceral voice

SO FAR AWAY was written for Gil De Ray’s brother,

Recently lost to life, he’d been stranded for a number

Of years in drug’s thrall. Here is blood infused empathy

When not even love can quite call.

I wrote this song

The connection shows horror and the sheen of truth

The past framed. Its an address seamed with care,

For when no touch stokes sensation. It is the clothes

Love is wearing when emotional nakedness strips each name.

A swoop of strings flock like birds as Gil De Ray now Sinatras,

As if lighting the way for his brother,

Whose private darkness is marked in the words each boy wrote.

Years ago all was well. Now despite troubled water,

Sound strives to soothe them even as the drone flies above.

It is the wasp’s bitter wing, made electric storm that song softens.

As So Far Away brings you closer, whether sistered or solo,

You will understand brother love.

IN THE SHADOW OF THE DRONE sets the task.

We have to crest the restriction.

Seek the space they can’t see you,

But the fraught farm is open if only we knew where to look.

Through ‘deranged senses’ he fights to show you the light

You are scared of. Safer to stay in the shadows,

Even if the dark arc soon scars.

Through ’empty streets’ you now run, sickness in your bones

Clawing at them, soon you won’t even recognise

Your own city as the roads within lead to Mars;

The spies we played games with are the insect hordes

That infect. This remarkable work is both saving grace

In music and art Gil reflects.

Smash the mirror. Its black.

Take yourselves to clear water.

Bathe in this music.

These starred directions are all you will need to get back.

The album will be available from   www.gilderay.bandcamp.com

View all posts by David →
This entry was posted on 24 August, 2019 in homepage and tagged David Erdos, Gil De Ray', IN THE SHADOW OF THE DRONE. Bookmark the permalink.