The Multi-Millionaire Arms Dealer – By Appointment 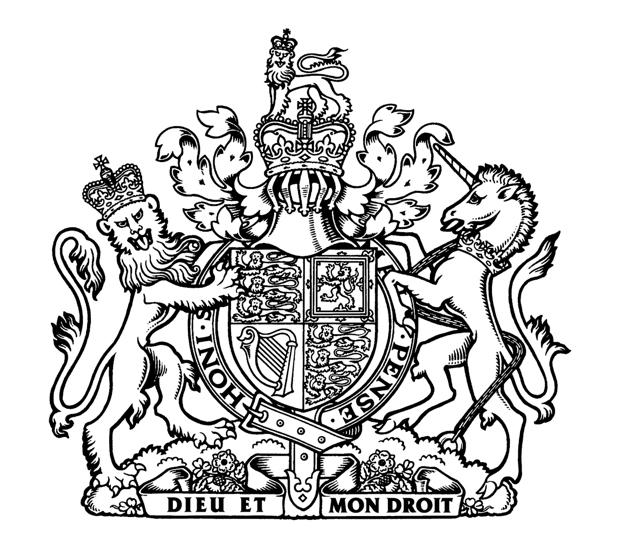 There’s no difference between being an arms dealer
And being a wanted war criminal.
Although you don’t have to get your hands bloody
The results are equally abhorrent.

But arms dealing will suit anyone used to gracious living
In one dinosaur nest after another –
Such as Balmoral, or Clarence House, or Highgrove,
Thanks to a billionaire mother. 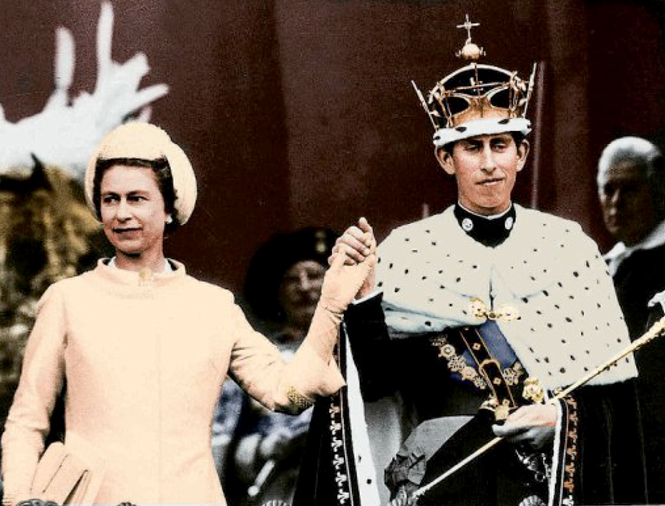 Such a dealer can travel at taxpayers’ expense
And can trade on a moth-eaten charisma
While he’s luxuriously feted by insecure tyrants
Before he sells them toys for their militia.

He boasts that he’s “boosting British trade”
As he attends an arms fair in Dubai,
Giving his blessing to sniper rifles, gun silencers
And grenades, designed to blow you sky high.

“We’re really rather good at making
“Certain kinds of weapons.” Charles has said.
“If the UK doesn’t sell them someone else will.”
As if that might bring comfort to the dead. 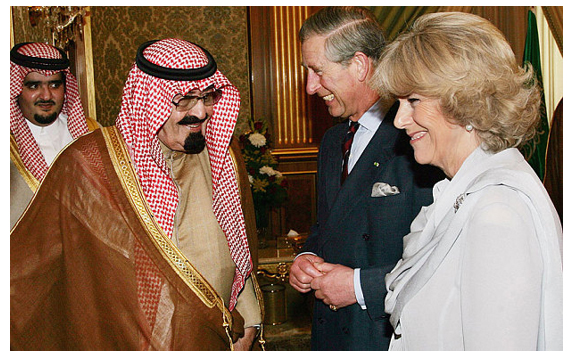 After a four-day visit to Saudi Arabia, Charles Windsor
Secures an arms deal for British Aerospace.
It’s worth $8 billion for 70 Typhoon fighter aircraft.
Charles then leaves with a smirk on his face. But his warplanes will be used in Bahrain and the Yemen
To strafe and to suppress secessionists.
Their bodies will be left to rot in desert sand
Thanks to the royal environmentalist. 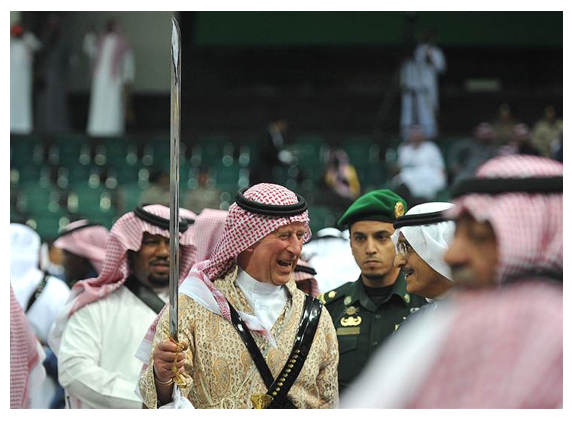 He celebrates the sale by joining a sword dance in Riyadh
Which his PA describes as “a cultural nicety”,
But Saudi swords aren’t used for combat in the region,
They’re used for executions of astounding brutality. 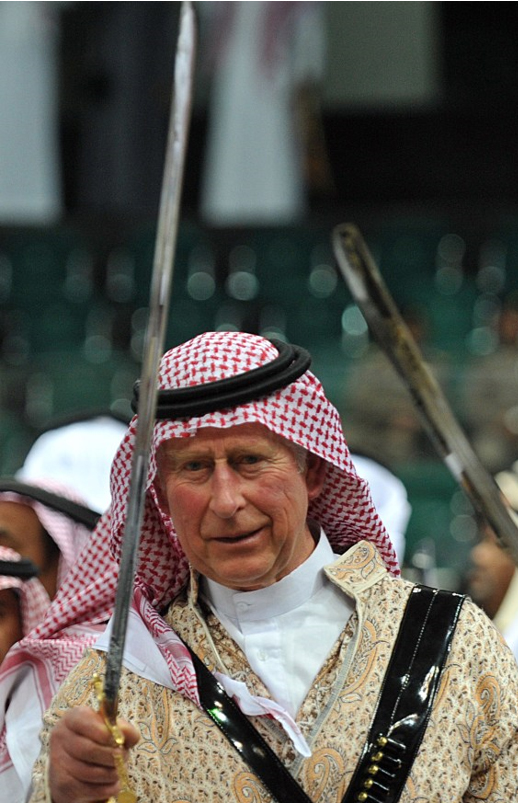 The prince poses for photographs waving a Saudi sword
Which is drawn just as it’d be for a beheading
And, pandering to his hosts, he reminds King Abdullah
How he once gave him such a sword for his wedding. 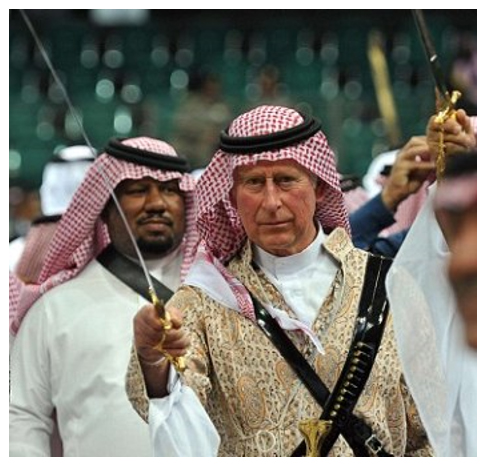 When it was rumored BAE share prices looked likely to fall
This tweedy Salome brought the Saudis to heel:
The ‘apolitical’ Prince flew to the Gulf with sexy pictures of weapons
And urged the Saudis to finalize an overdue deal. 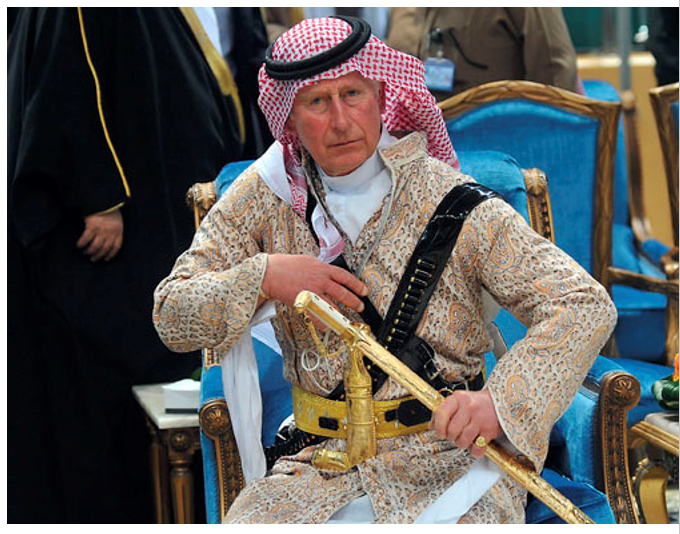 “One may smile and smile and be a villain,” says Hamlet
And Prince Charles’ dithering and asinine grin
Belie the nature of the Commander-in-Chief of Bloody Sunday’s Paras
Who killed Derry Civil Rights marchers… thirteen. 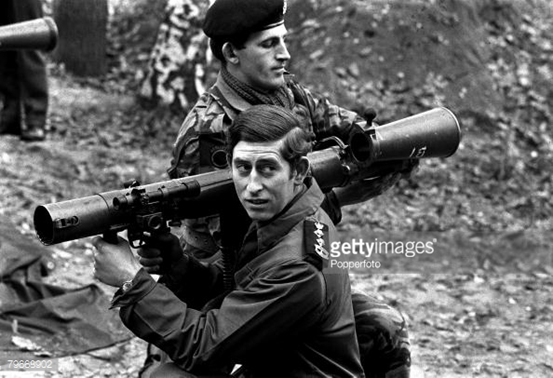 Angst-ridden, with pretensions to the moral high ground,
Charles is a businessman with a heart of granite
For whom being unelected heir-apparent opens handy doors
For this badger-culling and fox-hunting bandit –

A landlord who benefits from inhuman rack-rents
Prompting tenant farmers to commit suicide,
Prince Charles is rich and avaricious on principle
But he’s no need to make money from homicide. 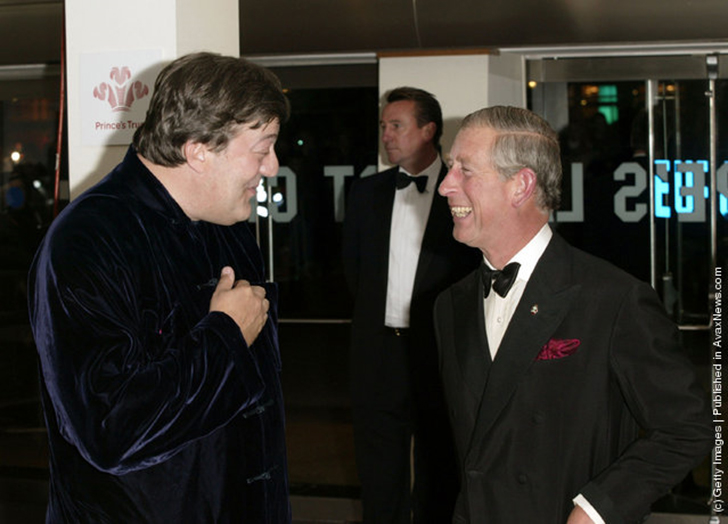 Sealed off by coteries of craven courtiers and lick-spittles,
He flies into rages when contradicted;
He’s petulant whenever tenants are slow with their rent
And only too happy to see them evicted. 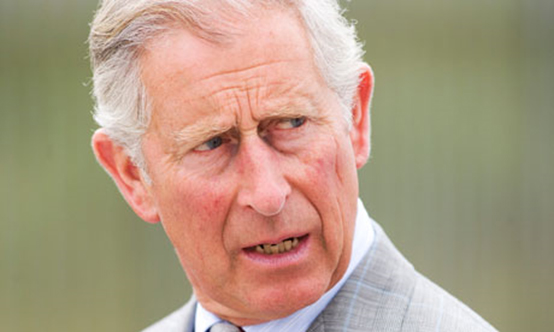 His Duchy estates are worth 400 million.
He has an income of 40 million a year.
As the beneficiary of common lands’ enclosure
Democracy has to fill him with fear.

“I was accused once of being the enemy of the Enlightenment,”
“I felt proud of that”
Charles once told a conference at St James’s Palace –
Hard to think of such a creature as head of state. He’s a man who’s evidently inclined to feel at home
In Saudi Arabia, ruled by 20,000 princes,
Where women can’t drive and can’t have the vote;
Where severing heads are legal sentences; 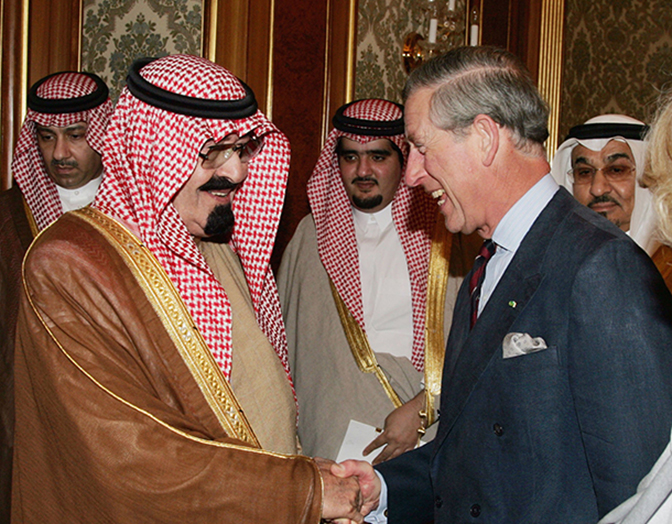 And where King Abdullah, Prince Charles’ chum.
As punishment meted out to one of his wives
For not giving him a son, locks up her four daughters
In a compound where he leaves them to starve. 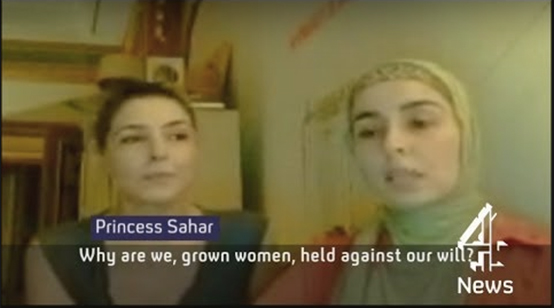 How can he justify arming such a reactionary state?
Yet he bends over backwards to do so –
Respecting the taboo against all mention of human rights
Saudi oil’s ubiquity prevents him from saying, ‘Boo!’ 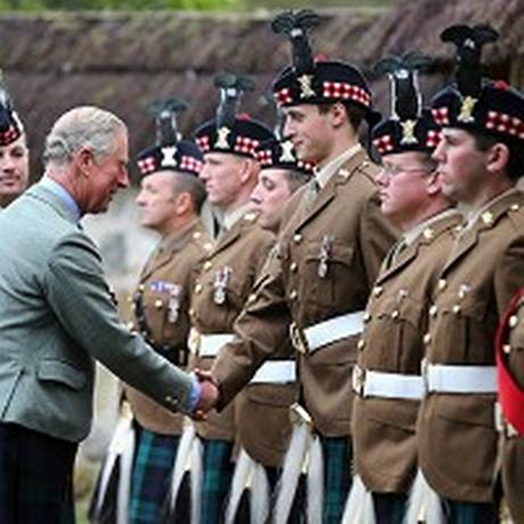 In his awarding medals to troops involved in illegal wars
And in his pestering PM’s for money for weapons,
He lubricates the wheels of the British war machine
And bestows his royal sanction on aggression.

As a reward for their arms-dealing antics
Charles and Andrew, his sordid brother,
Are awarded ludicrous, Ruritanian honours
By their indulgent, billionaire mother. 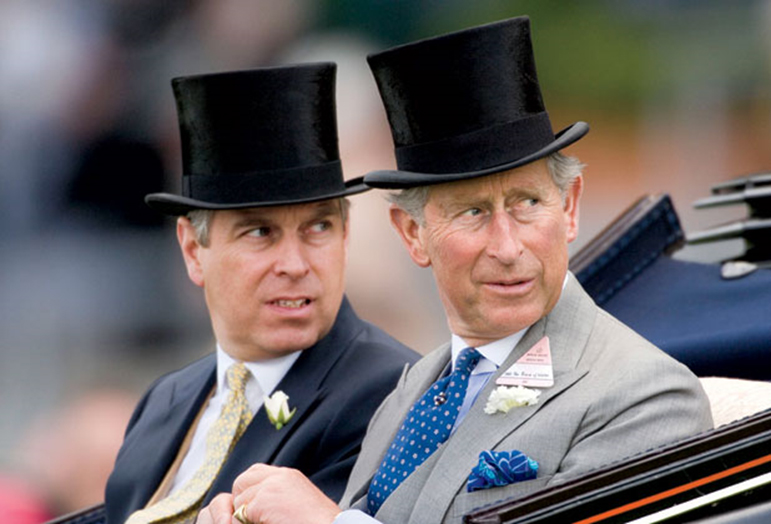 They’re Royal Knights Companions of the Thistle, or Garter –
The Duke of York and the Duke of Rothesay –
They’re Knights Grand Cross of the Royal Victorian Order
And Vice Admirals in their mother’s Navy.

In sanctimonious moments the poor little rich boy
Speaks of his “brothers and sisters in Christ”
Yet Charles sidesteps the New Testament’s peace-loving message
Lest there be arms-dealing profits to be missed.

The global arms industry is worth
Over a trillion dollars a year.
Charles happily becomes its obliging minion,
Peddling its deadly tools of hatred and fear. 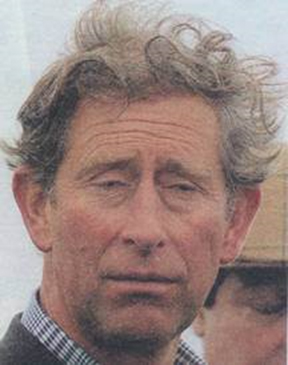 Thanks to the Crown Proceedings Act
The Royal Household is immune from arrest:
Unfair privileges are built into the system
With the sub-text ‘blue blood is best.’ 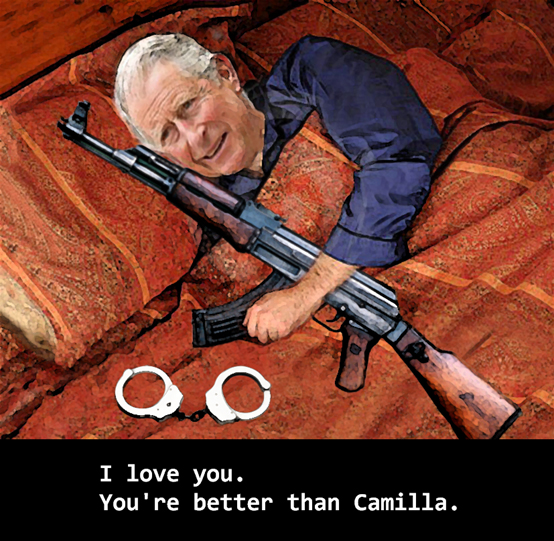 But if Monarchy insists that heredity is paramount,
That nations are best ruled by special gene pools,
What’s one to make of Charles resembling his distant cousin:
George Bush, the sociopath; the warmongering fool? 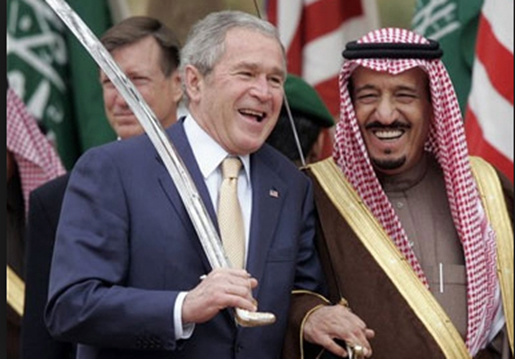 Prince Charles may believe in homeopathic farming
And in planting crops in time with the moon,
But unscientific sentimentalism green-washes
A land-hungry sadist in a royal cocoon. 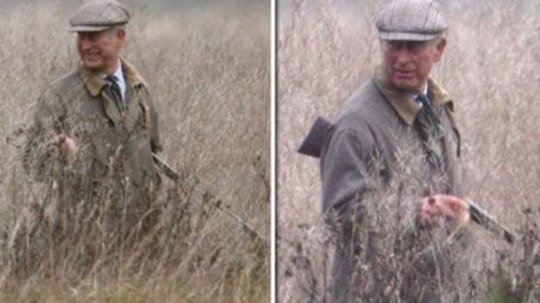 It’s a short step from his regarding some animals,
Such as badgers and foxes, as vermin
To his regarding other humans as inferior, and the subjects
Of a pantomime killer dressed in ermine.
.
.
.
Heathcote Williams

7 Responses to The Multi-Millionaire Arms Dealer – By Appointment