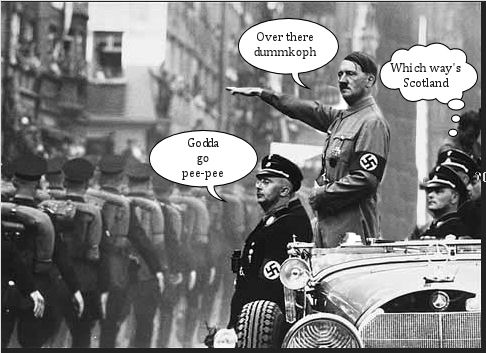 (It leaves a nasty taste…)

Once, not so long ago, a middle-aged couple from North Dakota took a walking holiday in the Austrian Alps, but one afternoon they veered from the path and became hopelessly lost. It began to grow dark. They saw a hamlet through the trees and decided to make for it, have a meal and then, fortified, find their way back to the road. They entered an old style Tyrolean inn and sat down wearily, ready to do justice to whatever local delicacies might be offered them.

‘I can’t make head or tail of this menu honey, they have such weird names, but then this is Europe I guess.’ said Hal.

‘Yeah, but it’s all part of the adventure Hon, now what you gonna have?’ replied Elvira.

‘Well I was toying with the Gauleiter soup, but then I had soup for lunch, maybe I should go for something else like er… Sturmabteilung, yeah that sounds cool – has quite a kick it says here, extra chilli in there I guess. Well it’s between that and the Leibstandarte, no, I’ll stick with the Gauleiter. What about you sugar pie?’

‘Mmm… well I was wondering about a Streicher salad, it says they always pick the “freshest, youngest shoots and leaves”.

Great! Now what about drinks? I could drain a rain barrel.

‘Oh a Blondi for me, what about you sugar plum?’

‘I’ll have a glass of Hess please, sounds refreshing – “a light impressionable white you can always rely on…” ’

‘Jawohl! And for your main course meine damen und herren?

‘I think we might need some help there Hans…’

‘No problem ‘Hal’. We are friends now of course, ze war has been over a long time, no?’

‘You mean ‘I’raq? – yeah, well we brought those folks freedom, apple pie and the Uncle Sam way, but they just don’t get it huh Hans?’

‘Is that fried Hans?’

‘No, roasted, and very well done…or you could have ze famous local Reichsfuhrer SS sausages, which are served with a homemade dumpling called Goering. It’s very filling. I am afraid we are all out of stuffed Heydrichs, a problem with our Czech supplier.’

‘Me too, sounds too good to miss…’

‘Hon, this is deeelicious!!’

‘Yeah, and so much, almost like back home, but strange there’s no one else at this restaurant, given the exceptional quality of the food…?

‘Now zen, do you have room for dessert meine damen und herren? We have ze following to tempt your sweet tooth…

a Geli Raubal, a Wilhelm Keitel, three scoops of Jodl, or Kaltenbrunner flan with whipped Eichmann.’

‘Gee, what a choice! I’m stuffed with Goebbels, but maybe I could just find room for a chocolate Jodl. What about you hon?’

‘Here are your ersatz coffees and with the compliments of ze house, our special Berghof biscuits…’

‘Well, don’t mind if I do Hans…you’re a gentleman and no mistake.’

‘Do you know Hon how lucky we yanks are to find these cute little European places with their crazy names and funny customs? I mean a restaurant called Arbeit Macht Frei sounds real neat…make a note of it. I wonder what it means? Hal, Hal! Are you listening to me?’

‘Wait till I tell the folks back home what we ate tonight, they’ll be so jealous..!’

‘Yeah, these Austrian dudes sure know how to lay on a spread…’

The bill arrives and they pay, smiles all round…

Hans salutes smartly over the table…

‘Yeah, Zeeg Hail to you buddy and come to America soon Hans, there’s sure a big market for Goebbels Fowl I reckon…’

The two sated travellers leave the Inn and make for the road through a copse of dark firs forced into sinister silhouette by the light of a new moon. Safely back in the fairytale city of S they glow with unforeseen adventure and yearn to talk of their experience to strangers. They happen to mention the name of the Inn in which they feasted to the deceptively friendly hotel staff dressed in pristine Tyrolean costume, who firmly insist to them that no such restaurant exists. The confused American couple are treated cursorily for the remainder of their visit.

View all posts by Niall →
This entry was posted on 12 April, 2012 in homepage, Uncategorized and tagged Austrian cuisine, Goebbels Fowl, it leaves a nasty taste, The Nazi Menu, will stone. Bookmark the permalink.

One Response to The Nazi Menu