The Only Sensible Thing to do. 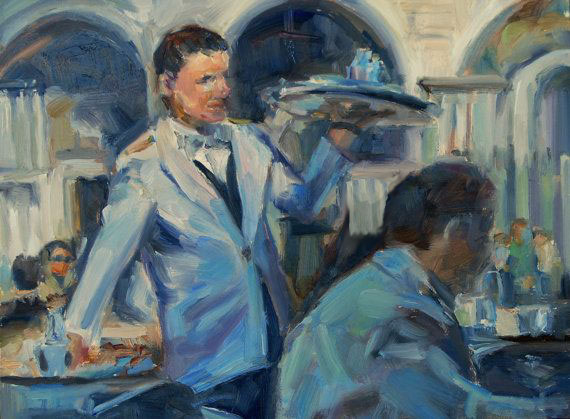 Hugh and Steven are on their monthly city break. A hobby they took up when their relationship cooled, two and a half months after their civil ceremony. A special day that they initiated when their one year love affair came to an end, with a view to ‘taking it to the next level’, as Steven described it. Hugh had had enough of the polyamorous playground of London’s ‘scene’, and considered making a commitment to Steven a better choice than becoming yet another ‘withered, lonely homosexual in late middle age.’ It’s not that he didn’t love Steven, it was just, well, he didn’t like him very much. He still lusted after him and hotel rooms offered an opportunity for greater freedom of expression in their sex. Hugh put it down to the neutral territory. Steven told him hotel rooms turned him on.

They found themselves having lunch in a ‘showy’ restaurant in the centre of Prague. A huge ‘art nouveau’ dining room. A high ceiling, wall length windows with expansive, heavy, red velvet curtains. Waiting staff in black and white busying around dark wooden furniture. A grand piano with the lid open sat waiting for an absent pianist.

The menu, written in English, was presented by an English speaking waiter. Hugh pretended not to notice Steven ‘checking him out’. They had a brief discussion about their preferred choice of lunch. Hugh went for a Czech dish comprised of meat in sauce with dumplings while Steve chose omelette and chips, which annoyed Hugh no end. ‘What was the point of coming all this way and eating the same food as they ate at home?’ Steven shook off the criticism with a shrug of his shoulders. Hugh asked for a glass of sparkling mineral water, raising an eyebrow when Steven ordered a large glass of white wine. Hugh didn’t understand how Steven expected to enjoy the afternoon’s museum tour if he was half cut. Steven told him he hadn’t come for the sightseeing. The accompanying wink made Hugh wince. It turned out he’d married a sex tourist.

The waiter came back with the drinks, putting them down the wrong way round and left again before Hugh had a chance to say anything. Begrudgingly, Hugh corrected the mistake. Steve was too busy watching the waiter walk away to notice and reached out for his glass just as Hugh put it in front of him. Lifting the glass to take a large gulp of wine, smacking his lips, he remarked that it ‘wasn’t that bad, considering’. Hugh asked after the factors to consider, ‘well, you know’, Steven replied. ‘Anyway, what’s going on in the office this week?’ He asked, before swigging another mouthful. Hugh said he’d rather not talk about it, and the usual conversation around not wanting to spoil the atmosphere with office talk took place, which, as always, ended with Steven being insistent and Hugh conceding.

‘We’re discussing’, Hugh began, ‘the ethics around putting amphetamines in the public water supply in a bid to tackle the environmental crisis.’ Steven nearly choked on his wine. When he’d composed himself, through a smirk he remarked that Hugh ‘could not be serious.’ Hugh assured him he was and he regaled facts and figures he had been given to study, that outlined the amount of food/energy/money, that could be saved if the appetite of the population were to be supressed. He told Steven that the need for food could be reduced by one hundred and twenty million kilograms a day, if everyone in Britain had one day a week ‘off food’. This would also reduce the amount of raw sewage needing to be processed, by approximately six million kilograms a day. Hugh assured Steven, with these sort of figures at stake, while farmers struggle to meet the country’s food needs whilst also taking in to account the water companies difficulties in being able to process human waste profitably within the existing infrastructure, the proposal was indeed being taken very seriously.

Steven laughed out loud, making Hugh look around nervously. He asked Steven what he found so funny. Steven said it was the fact that Hugh could sit there and in all earnestness suggest that dosing the population with speed could be considered a viable solution to saving the planet. Hugh remarked that it might sound funny to him, but desperate times call for desperate measures. Besides, the figures added up.

The money the super markets lost on food sales, Hugh explained, could be offset against the profits the pharmaceutical industry make on ‘the supplement’. The projected increase in productivity and the stimulated motivation of a depressed work force were a clear incentive. It could signal an end to the ‘not wanting to do low paid work’ attitude, the country’s poor had slipped in to. A predicted rise in spending on taxable consumables, nicotine and alcohol for example, not to mention all the fuel people will need to enable them move around, were an added incentive. A decrease in general life expectancy was another positive, as was an increase in spending on dental treatment. As far as Hugh’s department were concerned it was a ‘win-win’. Quite simply the only negative, was ethics.

Steven was now crying with laughter. Wiping his eyes with his napkin. Hugh knew he was about to come out with some stupid remark. Steven composed himself, wiped his mouth, apologised and,  whilst holding back his laughter, managed to blurt out that he had thought of the ideal slogan to win the public round. Hugh readied himself. ‘Do your bit, do one less shit’. Steven roared with laughter again. Hugh took a deep breath, and exhaled loudly, lifting his glass to take a sip of mineral water. He felt the bubbles bursting on his top lip, enjoying the fizzing sensation. He was not going to engage in Steven’s school boy japes. Saving the planet whilst remaining in profit was no laughing matter and if that meant amphetamines for all, well, so be it. In fact, to Hugh, it seemed the only sensible thing to do.

Tweet
This entry was posted on 10 September, 2022 in homepage and tagged Ben Greenland. Bookmark the permalink.